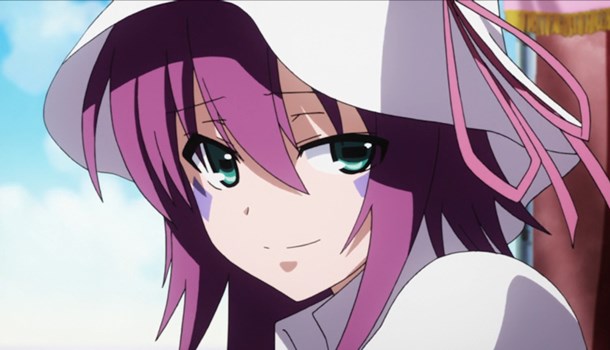 Take two parts Madoka Magica, one part Sailor Moon, and mix it all up with a pinch of Paprika and you’ll get an AMV that you can show at Ayacon this year. Alternatively you could spend the four hours of video editing time watching Dream Eater Merry, the new series being released by MVM Entertainment!

Yumeji is yet another in the long line of anime high school boys who live an ordinary life bar one unusual trait. In Yumeji’s case it’s that he can hold his hands to his face like a kid pretending to wear glasses and see everyone covered in disco lighting, which for some reason means he can tell what sort of dreams they will have. His own dreams, however, are filled with a bizarre world where he is endlessly chased by an army of cats (this is apparently a bad thing in his dream but to me they’re adorable!) One day this dream comes during the day and a dark character identifying itself as a dream demon appears to possess his body. At the last minute he is unintentionally saved by our heroine, Merry Nightmare, a dream demon herself trying to get home - as by the laws of anime she has to have a cutesy trait she becomes addicted to doughnuts.

As our story progresses the two will team up, hunting for a way for Merry to return back home whilst saving their friends from the various dream demons who are entering the world via the machinations of the dream demons Heraclese and Mystletainn.

As things go it’s a fairly interesting premise, but unfortunately it takes ages to get going. In fact, until around episode eight this is pretty much just a monster-of-the-week type series, and not the best one at that given that the series can’t seem to make up its mind on the rules of how the dream demon possessions work or even just on what their and Merry’s abilities actually are. If you took a drink every time the series broke a rule established in a previous episode without any of the characters noticing you’d be off for a stomach pump in fairly short order!

It’s only once you hit disc two that things start to come into their own, with a variety of revelations about mysterious characters and who the bad guys are (including a few genuinely surprising twists). These last six or so episodes are really pretty good watching – it’s just a shame that the path we take to get there is so disjointed and bland. I’d normally say that this was likely caused by a case of ‘making the anime when the manga is still being written’, but the thing is that whilst doing some background reading for this review it turns out that everything I liked about the series were the things that were created for it, and in fact it was the pieces that remained of the original manga that I didn’t like. That in itself is quite a surprising twist! It’s clearly allowed the series creators to go somewhere a little bit darker and gives the series a bit more bite to it, which really hooked me in.

Visually, things are a bit of a mixed bag with the animation style and quality being pretty inconsistent throughout. Presumably it’s supposed to be dynamic but it just ends up being pretty distracting - it generally looks good but it’s the switch from one style to another that’s jarring. Something else that was distracting for me (though admittedly it wouldn’t have been at the time of release), was the character design for Yumeji, which is identical to the one being used for the male lead in the currently-streaming The Pet Girl Of Sakurasou. Even though Merry came first it’s pretty odd if you watch both series and the character design feels unfortunately lazy because of it. Otherwise the character designs are pretty good – the humans are bland and average but it’s made up for by the dream demons whose designs improve more and more as the series goes on.

As a bit of trivia for you lovely people, series director Shigeyasu Yamauchi was also an assistant animation director on the original animated Transformers film. The action scenes in Merry are really nicely laid out so perhaps something rubbed off on him?

Sound-wise everything pretty much fades into the background, with even the opening and ending themes proving uninteresting despite the animation going with them (which, as tends to be the case, is of a much higher quality than the series proper). The voice actors put in a solid performance but it’s still clear that none of them brought their A game.

If I had to pick one or the other I’d probably have to say I quite enjoyed Dream Eater Merry overall. I went in with absolutely no expectations whatsoever and though the series had to throw the line back in a few times it caught me in the end. Just remember that it’ll take a few episodes to get going and don’t expect much closure given the nature of the series production - the fact that the manga is still ongoing today should tell you all you need to know on that score!

6
A rough start but the turnaround in its second half is a great surprise!