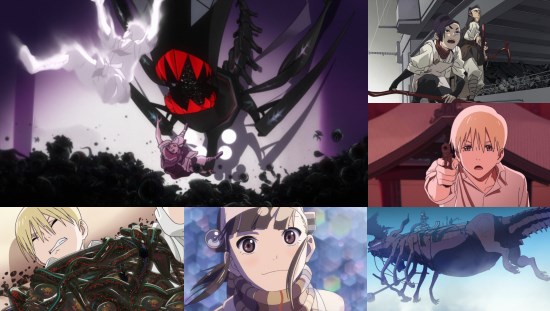 Studio Khara's Japan Animator Expo has impressed us greatly as a home for experimentation - its series of shorts has fascinated and delighted whether it's exploring new facets of the Evangelion universe or going off in a completely fresh, new direction.

While most of its shorts were satisfying in their own right, the studio themselves clearly wanted to do more with some of the unique ideas born from these efforts, and thus we've now been treated to a sequel of sorts to the first of those shorts, with The Dragon Dentist finding itself fleshed out into two short films of 45 minutes or so apiece. With some of Khara's notable talents behind it, can this outing get us flashing our pearly whites?

Essentially, The Dragon Dentist follows on from the short of the same name. That Japan Animator Expo entry introduced us to Nonoko, a girl who finds herself pressed into training as a titular Dragon Dentist, whereas here she's a relatively long-standing dentist who finds herself having to oversee the training of another new arrival named Bell. This is where things get a little harder to explain, as there's a lot to take in from the early running of the first half of The Dragon Dentist - Bell has effectively been reincarnated, having died in a ferocious war that has erupted far beneath our soaring dragon, only to re-emerge fully formed from the dragon's teeth, which are somehow inexorably linked to goings-on on the ground.

Bell's fateful appearance sees him faced with the prospect of either being taken into custody as an enemy combatant, or to work himself as a Dragon Dentist - not much of a choice, but one that sees him taken under Nonoko's wing as he learns how to fight the medley of strange and sometimes terrifying bacteria that forms around the sacred being's gums constantly. Given the links between the dragon's dental hygiene and the wider world, the growing struggles to keep said dragon's teeth clean seem to reflect the fact that a calamity is in the offing - nobody could be expected to predict just how close at hand and potentially far-reaching the disaster at hand might be however, and not just for the Dragon Dentists themselves.

There's so much more to The Dragon Dentist than that brief synopsis conveys that it's difficult to know where to start - in many ways the 90 minutes or so of these two short films combined feel like a return to the halcyon era of GAINAX and the likes of The Wings of Honneamise due to the way it builds such a far-reaching and sometimes baffling world of which you can only hope to glimpse a small but important slither. Although it stumbles early on due to its proclivity to throw in-universe jargon around before hauling out Bell to give the first film a chance to drop in all of its exposition, by the end of it all you feel like you've seen something fully-formed and incredible, albeit a little confusing.

The same can be said for the story here, which has so much that it wants to cram into its running time that there's little time to pause for thought - life, death, war, fate, love, and both the fight for and the railing against all of those things occupy portions of these two films in varying degrees. This feels like a story you'll need to take in multiple times to really appreciate every aspect of, which speaks to both its intense, immersive quality and also the fact that it could probably do with a little more time to even out its pacing and give the viewer time to digest what they're experiencing. That said, there is just enough of a blend of personality and comedy scattered throughout to at least ensure that there's a human heart beating beneath the often sombre subject matter at the core of the narrative, so the overall impact clearly achieves much of what the films set out to portray.

One thing that isn't surprising about The Dragon Dentist is the quality of its visuals. While elements of its production will feel heavily familiar to anyone who has watched the Rebuild of Evangelion films that's no bad thing, particularly when it comes to the studio's know-how in blending CG and traditional animation in a way that isn't overly jarring, and the action-scenes sprinkled throughout these films in particular are superbly choreographed and animated to provide some eye-popping punctuation to that all-encompassing story. For a story with such an ambitious scope in terms of both concepts and location, its high praise to see that Studio Khara have pulled it off with aplomb - these films are a delight to watch on a surface level, even if you find yourself struggling to dig into them conceptually.

At the end of it all, I'm honestly finding it hard to separate my feelings for The Dragon Dentist specifically with a wider appreciation for how it seems to herald a return to a time which seemed to be long gone. Anime like this simply don't get made any more as financial implications often come to bear to extinguish unusual passion projects like this, and the simple existence of this project feels like a beacon of hope that the more resilient industry we're seeing emerge in the post-streaming world might be able to support adventurous original prospects such as this one. Dare we hope to see Studio Khara flesh out some of their other shorts in a similar fashion?

Trying my best to put all of those hopes and dreams to one side, The Dragon Dentist is still a striking effort - visually imaginative, ambitiously broad in its narrative scope, and ultimately capable of pulling off a lot (albeit not all) of what it sets up. As mentioned, this is the kind of production you may need to watch multiple times to completely soak in everything it's trying to convey, but thankfully it's also something I feel like I'd genuinely enjoy watching multiple times thanks to some strong characters, eye-catching design work and dynamic visuals.

You can currently watch The Dragon Dentist in streaming form on Crunchyroll.

8
It packs a huge amount into its relatively short running time, and although its density can be to its detriment in places this is still a fascinating, engaging and eye-catching work.
LATEST REVIEWS