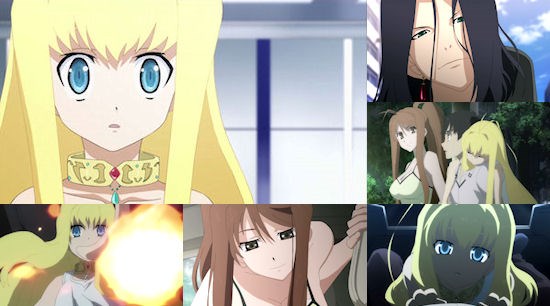 It's now two months after I began watching Dragon Crisis and I find myself with slightly fewer brain cells, more grey hair and an uncanny craving for girls with different coloured eyes... nothing unusual there then.

Dragon Crisis has proved to be a bit of a surprise. From its shallow beginnings as just another clichéd harem anime, it has dropped to new levels as the creators tick off box after box on the good ol’ anime “to do” list, including not only a beach episode complete with watermelons (both kinds) but also by throwing in additional characters to appeal to every kind of anime fan. Yes, they got me with the shy wolf girl... I am just too easy to please it seems.

So what of the Ryuji-obsessed little blonde dragon? Well, in the short time we get to know her, she manages to find three other dragons (two of whom try to kill her in some way or another); to almost eat a live sheep; achieves adulthood by french kissing an older man and achieves flight without the aid of jet propulsion or a good curry. All of that before finally admitting that marrying Ryuji is perhaps a little premature and that they should get to know each other a bit better first, and all while fighting off a myriad of other female characters who want a piece of hot level ten breaker action.

Not a lot can really be said about this rather confused harem series. I have managed to keep with it and enjoy it since I wrote my first review of its early episodes. However, I am disappointed that the creators decided to keep things so generic throughout, as I felt that there was potential for perhaps some half-decent character development at least.

Instead, they opted to introduce a new girl every other episode who would either a) fall in love with Ryuji, b) try to kill/kidnap Rose or c) both. The series reeks of wasted potential. The creators had a decent enough universe to work with. If secret societies aren’t your thing, then just the inclusion of artefacts that can bend the laws of the universe on a whim would give you plenty to work with. Even if all we got was a “gotta catch em’ all” style series it might have been an improvement. But no, what we got was Dragon Crisis - a series which began promisingly enough, kept up its pace most of the way through, and then lost all of its ideas before jumping head-first into the box of generic anime endings as all of the female cast members hang around a crowded classroom in various states of undress.

Still, at least the show had a very cute wolf girl...