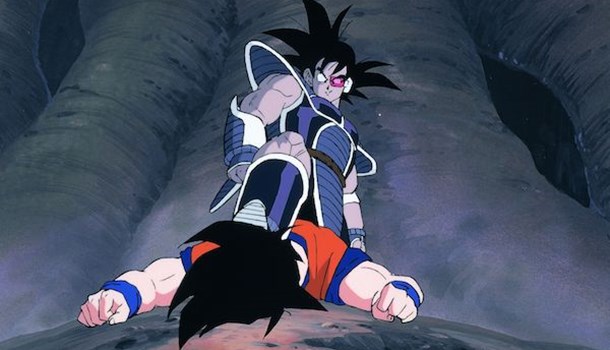 It feels like only last week we were reviewing Dragon Ball Z Movie Collection One, and now we have this, our second helping of Dragon Ball movie goodness, brought to these shores by Manga Entertainment. Much like the first two movies this pair are set towards the beginning of the Dragon Ball Z franchise, so there are no Super Saiyans as yet (at least not proper ones…), though the second film of this set does introduce a Super Namekian for the first time, in the form of Lord Slug.

However, before we delve into the world of Super Namekians and Lord Slug, the first movie in this set is The Tree of Might. Bulma, Krillin, Oolong and Gohan are out on a camping trip when, one evening, a mysterious stellar object crashes into a nearby forrest and sets it ablaze. Luckily for the creatures of the forest Krillin and Gohan manage to put out the fire and rescue a good number of the animals. However, with the animal’s home completely destroyed the four friends decide to use the Dragon Balls to restore the forest.

In the process of rescuing the animals Gohan meets, and befriends, a dragon he names “Icarus”. The film then spends what seems like an eternity focusing on the fast friends frolicking and… Zzzzzzzzzzzzz… Sorry, I dosed off for a minute there. You can excuse these kind of diversions in a long running series like Dragon Ball Z, but in a film which runs for about an hour it's inclusion here is pretty egregious.

Eventually, and unfortunately for the inhabitants of Earth, the use of the Dragon Balls proves to have been premature, as the stellar object turns out to be a probe sent by a group of mysterious aliens with seemingly apocalyptic intent. Perhaps worst of all, the leader of the group looks eerily familiar, as if he were of the same lineage as Goku… The titular Tree of Might is planted by the alien invaders with the intent that it will soak up the Earth’s life force, leaving the planet barren, and bearing a fruit which - when eaten - will boost their powers drastically. From there on out it’s a fairly by the numbers Dragon Ball movie, the bad guys beat the good guys, the good guys get more serious about the fight, rinse, repeat. It’s an entertaining enough romp, though there is one glaring plot based issue: That is Goku’s seemingly miraculous boost in power, which allows him to win the day. It comes from nowhere and is, at best, inadequately explained. Though this is a flaw common with both of these movies, and is perhaps a symptom their positioning in the Dragon Ball chronology and a need to keep the enemies threatening without effecting the heroes established power levels.

If The Tree of Might is a “fairly by the numbers” Dragon Ball movie then Lord Slug is paint by numbers Dragon Ball movie. It will be utterly familiar and predictable to anyone with even a passing interest in the franchise. A giant meteor is heading towards earth, threatening to destroy the planet. Despite the Z-fighters best efforts the planet looks done for, until that is the meteor turns out to be steered by a parasitic spaceship and its alien masters - which ditches its host and claims the Earth in its stead. The titular Lord Slug declares himself the unchallenged ruler of Earth, and then seems somewhat surprised when a number of people challenge his forces.

The rest of the film is the usual series of fights involving various members of the regular cast, even Chi-Chi gets a look in on this one. Inevitably Goku ends up facing off against Lord Slug and the result is predictable from there. Like the previous film this one also suffers from Goku magically powering up out of nowhere, this time with a hint of the Super Saiyan he eventually becomes in the series proper. As if to ram the point home the film’s title in Japan was Dragon Ball Z: Son Goku the Super Saiyan, though it is not the form you will be familiar with from the series.

Ultimately the plots of both movies are somewhat trite and the action is generic, but there are at least a few glimmers of what makes Dragon Ball Z such a well regarded series. Perhaps there is a touch more action on offer here than the previous set, though these films are certainly lighter on plot than those earlier films were. They are, however, still a decent bite sized chunk of Dragon Ball.

5
All in all this pair of films are entertaining enough, but they’re far from the best that Dragon Ball has to offer.
LATEST REVIEWS