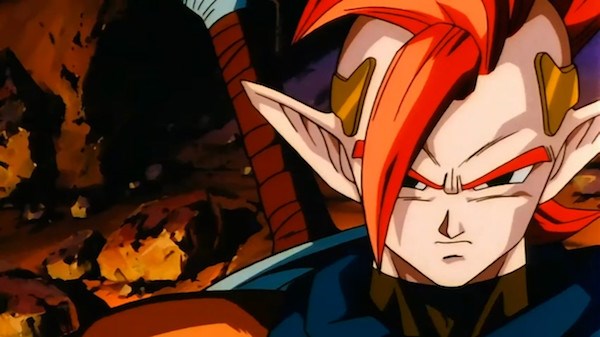 Fusion Reborn is the first of the two movies in this set, and it begins with a workplace accident. Though instead of calling Anime Injury Lawyers Ltd. the Z-Fighters are left to clean up the mess. While (the still apparently dead) Goku is off fighting Pikkon in another Other World tournament - under the supervision of the Kai - one of the Oni working for King Yemma gets a bit distracted while tending the “spirit cleanser” tanks. This results in the young Oni being transformed into a Majin Buu-esque villain, Janemba, and bringing the work of Other World to a calamitous halt. With the Gates of Hell closed the dead begin to walk amongst the living, and vice versa. This leads, somewhat strangely, to an Adolf Hitler lookalike attacking Earth, along with his army and a bunch of old villains from the series’ past, such as Frieza. The Hitler lookalike is tackled by a powered up Goten and Trunks, which leads to the quip “blonde hair, blue eyes, super strength. I should be recruiting them”, while Gohan takes on the other villains. That this is something worth highlighting from Fusion Reborn should give you some clue as to the quality of the film as a whole…

Though all the Earth based shenanigans are nothing more than a comedic side show, the real focus of this film lies in the battle to defeat Janemba in Other World. Here Goku has to go all out, pushing himself up to Super Saiyan 3 and still coming out second best, while Pikkon has to figure out how to re-open the Gates of Hell and free King Yemma. Ultimately Vegeta shows up having escaped Hell (he is also spending some time being dead) and reluctantly has to help out his old rival, swallowing his pride so the titular fusion can take place.

It’s all pretty by the numbers stuff, especially for anyone who’s seen the Majin Buu related arcs of the series. There’s nothing new or exciting on offer in this first film, nor is there anything to really hook the viewer. It’s towards the end of the series, so the animation is some of the best of the movies and the palette is a bright colourful one, but somehow the whole thing feels grey and monotonous. There are a few childish giggle worthy comedy moments thrown in, but they can’t rescue the film from it’s own tedious self-plagiarism. It’s as if a bot swallowed up a bunch of Dragon Ball Z scripts, mashed them up, and this film is what it spat out.

The second film is, at least, a more original affair, though it is still heavily rooted in the events surrounding Majin Buu. Great Saiyaman I and II (Gohan and Videl respectively) are busy, very busy, they begin by taking out some bad guys and then have to rush to the rescue of a seemingly suicidal alien. The alien introduces himself as Hoi and tells them the story of Tapion the Brave, who may be Earth’s last hope against an approaching evil. The old alien has with him a music box said to contain Tapion, who has supposedly been trapped within it for a thousand years. Naturally that’s not all there is to the tale of Tapion, and Hoi has seemingly been to the Dragon Ball Z School of Witchcraft and Wizardry. When he finally appears Tapion makes for an interesting, if a little mopey, character. Trunks in particular gets some meaningful screen time, trying to interact with the sullen Tapion. Eventually the aforementioned threat reveals itself... Though the progression of the story is nothing if not predictable credit must be given for trying something new at this point in the movie’s chronology.

Thus we’re left with two very different, but both very ‘Dragon Ball Z’ movies. The first of which does little to spark the imagination and is about as original as a photocopy - not even the attempted injection of goofy comedy can make up for the film rehashing the same tired old things we’ve seen a thousand times before. You could almost believe that is the very reason why they were the last two movies for almost twenty years, that they had simply run out of ideas. However the second movie redeems the set with a much more unique approach, reminiscent more of the original Dragon Ball series than Dragon Ball Z. All in all the two balance out to something pretty average as far as the Dragon Ball Z movies go.

7
A paint by numbers Dragon Ball Z movie, paired with one of the more unique ones.
LATEST REVIEWS