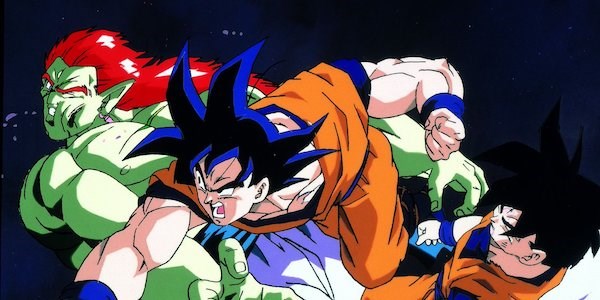 Continuing their now regular releases of Dragon Ball Z movie collections, January brings us Manga Entertainment’s first of this year in the form of Dragon Ball Z Movie Collection Four. This release contains the now standard two films per set, and they comprise of Super Android 13 and Bojack Unbound.

Super Android 13 provides a continuation of the Android Saga, this time it’s Androids 13, 14, and 15 who arrive with the inevitable mission of trying to kill Goku. Having been fine tuned by Dr. Gero’s computer - by analysing the Saiyan’s fighting technique and being programmed with the result - these Androids may prove to be the toughest yet…

Androids 14 and 15 show up while the Z-fighters are out in the city, with Goku and Gohan being dragged (literally) around the shops by Chi-Chi. Both androids attack and the resulting fight wrecks half the city, before anyone thinks it might be a good idea to steer the battle to an area that's less well populated. Nobody even bothers to go Super Saiyen, rather they prefer to let the Androids batter them around the crumbling city for a bit. Eventually the fight is relocated somewhere that’s a bit quieter and much, much, colder.

It’s at this point that the titular Android 13 shows up and promises to kill Goku… With a dire Southern US accent which feels totally and utterly out of place. Though if that weren’t bad enough, when Android 15 speaks you might just think you’ve fallen to a time-warp. If the out of place, and frankly offensive, voices were not bad enough to turn you off the dub then the liberties the script takes with the source material certainly will. Liberally throwing in lines like “Red Ribbon Redneck” make this feel less and less like a Dragon Ball Z film with each and every butchered line. At least you have the option of switching to the original Japanese audio, though for someone who grew up with the English cast this can be almost as jarring.

I have to say that for me this is the weakest of all the movies so far, especially in regards to the English audio. Considering that Super Android 13 was brought to the west in 2004 the dub really shouldn’t be as bad as it is. Plot wise it’s pretty slim pickings, even for a Dragon Ball Z movie. Some of the earlier films you can forgive due to their age, but this one came well into the series’ maturity and should have more about it.

Bojack Unbound is, thankfully, a much more interesting piece. Mr Satan (or Hercule if you remember the old UK TV broadcasts on Cartoon Network) is the figurehead of a Galaxy wide martial arts tournament, which naturally all the Z-fighters enter. Well, with a couple of exceptions. Goku doesn’t join his friends on account of spending some time being dead (though not for tax reasons…), and Vegeta no longer sees the point of fighting without Goku around. The tournament has a few interesting twists on the usual Dragon Ball tournament style, and the tournament’s finale displays some definite The Running Man influences, at which point the villains of the piece finally make an appearance.

Before Bojack and company reveal themselves this film is by far the most comedy heavy to date, and that is very much to it’s benefit. This makes for a much better balanced film than its forbears and provides a stark contrast to the previous devoid-of-plot effort. The final act itself is perhaps the least interesting part of the film, but Bojack and his underlings provide suitably threatening villians. Another nice, but necessary, aspect of this film is that it shifts the focus away from Goku and onto other members of the cast, such as Gohan.

This set is a bit of a mixed bag, the fun and action of the second film just about makes up for the dire Super Android 13… Just about.