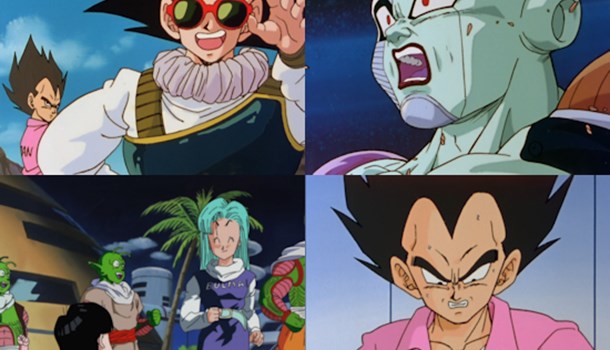 We are now well into the portion of Dragon Ball Z that my childhood memory cannot inform, and I am at the mercies of the series! What next for Krillin and the other, less important, members of the cast?

The Planet Namek is no more, and with its destruction Goku and Frieza vanish into space alongside it. Or do they? Evil lord Frieza is found and rescued by his father, and fitted with cybernetic replacements. As soon as he can draw breath once again, he demands they make a beeline straight for Earth, hell-bent on destroying Goku’s home planet and making the Super Saiyan pay. Just as things look dire for Earth’s defenders, a mysterious youth appears and saves the day! Hurrah! But he comes with grim tidings - news of a new, and even more diabolical threat that our heroes must face up to, one quite unlike anything they have had to face before!

The pacing of this third set of Dragon Ball Z Kai is singularly peculiar - the re-appearance of Frieza and introduction of new hero Trunks takes up much more time than expected and leaves you floundering somewhat due to the lack of any real tension. It feels like the extended first act of a play - everything is spoken of as if it is dire yet the actions do not match and you know that resolution is right around the corner. That resolution comes with Trunks' introduction of the dastardly Androids - antagonists which sound truly diabolical and who, initially, have the powers to match. Things start to look a bit ropey when Goku is taken out by a deus ex machina that he was explicitly warned about and then proceeded to ignore, and after a brief recovery with some damn enjoyable fights and some impressively tense scrambling on the part of our heroes the show again stalls.

This stall is the core problem with the storyline in this set - just as the prime trio of Android antagonists are at the height of their menace and dramatic potential the series tosses them adrift, leaving them to act like vaguely comedic flotsam somewhere away from the plotline. The series then flounders in the process of slowly generating a new antagonist from whole cloth. This really takes the wind out the series, and is perhaps exacerbated by Kai’s brevity as the switch is so abrupt and apparent when it comes. One episode the Androids are the perfection of murder, and then next time on Dragon Ball Z they are gooning around stealing a pink van and harassing a clothing merchant with a silly accent. While the new antagonist that emerges, Cell, is worth the wait due to how much of a detestable and downright creepy bugger he (it?) is, I can’t help but feel I have been cheated out of a “real” resolution to the conflict with the Androids. They were so cool! Ice cold! They punked Vegeta! One of them kissed Krillin! Scandalous! Then nothing much becomes of them. Oh well, what might have been.

The series manages to fill this interim with surprising ease, which does soften the blow. It runs the gamut, discussing the ins and outs of Time Travel, sudden and plot-mandated Heart Disease, some questionable parenting, and Yamcha being a waste of oxygen. The questionable parenting is particularly good fun, with Bulma taking her rightful limelight as the best worst character and a doting but neglectful parent. Still, at least she isn’t as bad as Chichi. As a result the series does still manage to fly by, even with the bizarre (and looking back on it jarring) change in antagonist halfway through.

The animation in this set of Kai is improved over the preceding two due to the lack of “new” animation spliced in, which lets the good old stuff shine through. The fights with the Androids are a lot more physical as well due to plot machinations in how they operate, which makes the battles with them a lot more impactful and brutal when they do occur. As a result you get a lot of enjoyable kineticism and close up shots of people getting wrecked.

The dub for Dragon Ball Z Kai continues to be top notch - Frieza’s father King Cold (Oh Toriyama you hack) chews the scenery into tiny bites for his sadly brief appearance, and the regular cast continue to put in damn fine work. New character Trunks is the slight exception, as he sounds like he is forcing too much of a gravelly side to his voice which doesn't quite work out. The series also has a new ending theme - it’s still terrible and fit only to be skipped whenever it comes on though.

I enjoyed this set of Kai, but I have to admit it has left me with an unsatisfiable itch. The wonderfully tense introduction and buildup of the Androids as antagonists was great fun to watch, and to have it thwarted and the show pull a hard turn in favour of a new antagonist took the wind out of my sails for a good portion of it. Still, this set ends on a high note with the introduction of a skin-crawlingly creepy villain, and the promise of some good fights on the horizon. Roll on set four!

7
A strong continuation for the series, let down by some questionable changes in direction.
LATEST REVIEWS