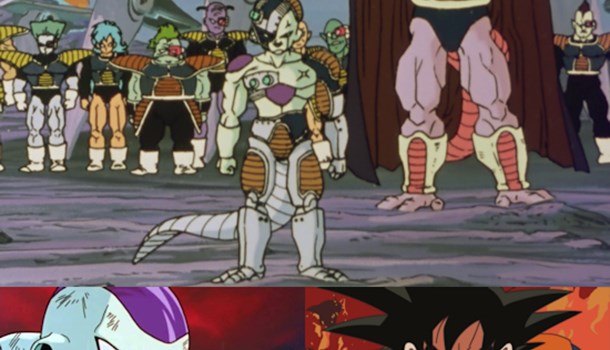 I quite enjoyed the first set of Dragon Ball Z Kai, and with this second set covering what many people see as the centrepiece fight of the series I was excited to tear into it. But does this set deliver on its promise of all killer, no filler?

Having popped over to the distant planet of Namek to find another set of mystical wish-granting Dragon Balls, Gohan and Krillin find themselves in the middle of a hostile takeover of the planet by the intergalactic tyrant Frieza. The murderous ruler is hunting for the Dragon Balls in order to attain eternal life, and is willing to destroy anyone in his way to get it. With Goku still on his way to the planet, can Earth’s ambassadors survive the onslaught of Freiza’s underlings and thwart his designs on immortality?

This second set of Kai continues the good work of the first one, maintaining a brisk pace through the cast’s adventures on Namek. This pace really helps out the story as it maintains three to four different plot threads at the same time, each playing out as the various actors criss-cross the planet trying to collect the titular Dragon Balls. This snappy pace continues as it sets up fights with Freiza’s lieutenants and then with the goony but intensely amusing Ginyu force, who I had honestly forgot about until they crash-landed into the plot, proceeding to take it over and make it intensely entertaining to watch. More shows need overly theatrical villains.

Sadly, once the climactic fight with Frieza starts some of the bad habits of Dragon Ball Z proper start to creep into even this streamlined Kai version. Primary among these are cut-aways to characters who are not physically present at the fight, but can "feel out" the fighters power levels and loosely commentate on the fight. These scenes are intended to enhance the tension of the moment but instead drain momentum and break events up. This starts out as a minor annoyance but escalates as the fight continues as you get constant reminders of the state of the battle you were watching in the directly preceding scene.

The momentum of the show goes even further out of the window towards the end of this battle, as the fights gets broken up with constant plot machinations occurring both within and without it. While the Kai treatment and edits have helped to speed up the series as a whole, in this case it exposes the near constant flailing of the series as it tries to piece together an ending to the plotline currently in motion right in front of your eyes. It's very jarring to watch, as up until this point I was fully engaged and took for granted that an ending would naturally arise out of the series as it continued. Then, the show slows to a crawl as it plays a very long session of Show and Tell, explaining in intricate detail all of its overly complex plot machinations to arrive at a perfect happy ending. This was honestly torturous to watch as it breaks up the final, pivotal fight of the arc that you have been looking forward to for the entire set and it could quite easily have been cut in this, a reimagining that exists to trim down the unwieldy mass of Dragon Ball Z! This set compresses 46 episodes down into 26, a slightly lower rate of compression than the first set.

As with the first set, the art for Kai holds up very well with the same caveats. Some scenes have not been treated well by time and the cels themselves look damaged with smudges and scratches in plentiful supply. Even these damaged cels look far better than the re-animated scenes created anew for Kai, which make an unwelcome return for this set and look equally as bad as they did before, cropping up frequently during the first half of the set. They are still atrocious, having the framerate and art quality of a mid-2000s Flash cartoon. The opening, ending and commercial break sequences are still present in their stark new style, but at least they are not poorly authored/compressed this time around on the Blu-ray edition we received for review!

The dub remains a highlight of the show, with the actors enthusiasm shining through and enhancing the roles they are playing. Particular credit goes to the Ginyu force who spout absurd lines in equally absurd accents with great relish. Why is Jayce Australian, anyway? Either way, it sounds great. Equally great is Vegeta’s voice actor, Chris Sabat, who gets a lot more prominent placement in this set of episodes and does a great job as the double-crossing Napoleon-syndrome-suffering jerk.

The background music also deserves a mention as it does an excellent job of getting you pumped up for and dreading fights in equal measure. There is even a pleasant surprise in the shape of a pair of vocal tracks that play during some pivotal fight scenes, one complete with gregorian chanting of all things! After laughing at the mild absurdity (and after having a brief Neon Genesis Evangelion flashback) I found myself really enjoying it.

Dragon Ball Z Kai still performs its job admirably - it gives you this classic series in a compressed fashion. The issue with this second set is that in the process it also exposes some of the flaws of the original in terms of plotting and fight scaling, and also indulges in some of the bad behaviors that I hoped Kai would excise entirely. That being said, it is still an exciting watch for both newcomers and returning champions to the franchise.

Presented with 5.1 English audio and Japanese audio with English Subtitles. Extras are clean opening and closing credits and a set of trailers for FUNimation shows.

7
While not without issues, Kai continues to deliver Dragon Ball Z at a much nicer pace.
LATEST REVIEWS