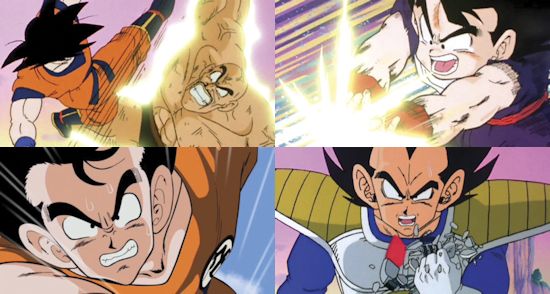 It feels a little bit as if Dragon Balls are like buses in the UK of late - after no sign of them for years and years, suddenly two crop up at once.  Thus, while we're still churning through Manga Entertainment's rapid-fire releases of Dragon Ball Z on DVD, so we also find ourselves granted a treat for the New Year in the form of Dragon Ball Z Kai on UK television, courtesy of satellite TV channel Kix.

For those of you unfamiliar with the concept of Kai, it effectively takes the original Dragon Ball Z TV series, cuts out virtually all of the non-manga "filler episodes" to streamline it substantially, and then remasters what remains with a re-recorded voice track and new special effects.  In other words, if you've been put off watching Dragon Ball Z on account of its length, Kai offers the perfect way of enjoying the core of the series without having to sit through almost three hundred episodes.

This significant reduction in episode count, and thus speeding up of the show's story-telling, is readily demonstrated by these opening episodes to the series, which completes the lion's share of the show's Vegeta saga in seventeen episodes where this took almost forty episodes in the original series.  This brings an end to a lot of Dragon Ball Z's long-running jokes amongst fans (the "few minutes" that spans a large number of episodes or characters taking what seems like hours powering up) and genuinely works well for the most part in making the entire viewing experience feel richer and purged of needless distractions, although from time to time those cuts can feel a little clumsy and hardcore fans of the show might also lament some of the material excised from Kai in the name of brevity.  Of course, this isn't helped by this TV broadcast of the series, which is aimed at a younger audience and thus cuts out some of the more gruesome scenes of violence, which can also feel jarring even if you aren't familiar with the source material.

If you're completely new to the world of Dragon Ball Z, then Kai certainly feels like a solid place to start - a little shuffling of material makes Goku's origins clearer than the original series for those unfamiliar with the original Dragon Ball, and everything moves at a delightfully fast clip to make for a stronger "just one more episode" pull, in turn making Kix's decision to air two new episodes a day (at the time of writing) a perfect one to keep you coming back for more but feeling satisfied with your day's viewing.  Beyond these creative choices, the core of Dragon Ball Z's shounen story of ever-more powerful warriors duking it out over the fate of their friends and planet(s) is as compelling as ever - a mad blend of elements that is great fun to watch and with main characters that you can't help but want to cheer on (or boo and hiss at in a suitably theatrical manner).  The series might well feel like its making things up as it goes along, but who cares when it's this enjoyable?

One area where Dragon Ball Z Kai might struggle to bring new viewers into its fold is in terms of its visuals - remastered (heavily so in places) they might be aside from brand-new opening and closing credit animation, but Kai still looks dated for the most part - not drastically so, but in this era of High Definition and colourful digital animation, the series does "feel" old to look at, not helped by some pretty ropey (and 4:3 non-widescreen) broadcast quality on Kix's part.  Will the kids the show's TV broadcast is targeted at care about this?  Probably not, but it's still the weak link in an otherwise strong outing.  Things are better from an audio point of view, with an eminently strong English dub that carries the story of the series effectively and even makes the most of the show's occasionally emotional moments.  Even the English language version of the opening theme is far catchier than it has any right to be!

While we can't really call Dragon Ball Z Kai the definitive version of the Dragon Ball Z story - too much material is missing for it to hit all of the same notes as the original - it is nonetheless by far the most accessible version of the series we've seen thus far, ensuring that a moment is never wasted in the name of filling time and that every episode is packed to the rafters with the elements of action, comedy and the like which make watching Dragon Ball Z so enjoyable.  Even edited down a little further to remove its most violent and bloody moments, Dragon Ball Z Kai is certainly worth watching whether you're new to its lure or want to watch the series again without draining umpteen hours of your life.  Besides, given the lack of notable anime on UK television these days, why not give it your support and check it out?

Dragon Ball Z Kai is currently broadcast on Kix, which is available on FreeSat channel 606 and Sky channel 627.  Check out their web site for the current schedule.

8
If you find the length of Dragon Ball Z off-putting, Kai's streamlined take on the series is exactly what you're looking for.
COMMENT AND DISCUSS
blog comments powered by Disqus