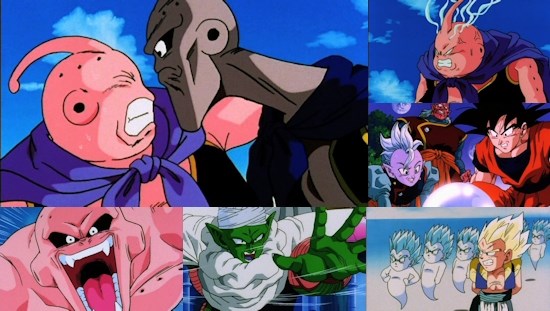 So, it comes to an end... over two hundred episodes and nine DVD box sets after it arrived in the UK, Dragon Ball Z is finally coming to an end. But is it with a sense of relief of sadness that we say goodbye to our coverage of this much-loved anime property?

The previous season of the show left us in a relatively happy place - Majin Buu no longer seems like the major threat he was previously expected to be largely thanks to his developing friendship with, of all people, Mr. Satan. However, not every member of the human race is quite so friendly, and when a particularly violent delinquent decides to attack Mr. Satan and Majin Buu's precious puppy, Buu loses his cool. Not good news, given that this is one fellow you really don't want to anger....

To make things worse, it seems as if Buu has literally split into two, and this new, second Majin Buu is even more violent, vicious and deadly than the last. Thus, the race is on to save the Earth from a major threat to its very existence once again, with the likes of a recombined Gotenks, Gohan, Goku and Vegeta all playing their part in trying to stop Buu's rampage before it destroys their current home planet and beyond. Given the magnitude of the situation, it seems as if this may be too much even for our heroes - can mankind itself combine to help win the day?

Perhaps the most impressive thing about Dragon Ball Z as a whole is that it effectively manages to rinse and repeat a similar story - evil alien arrives plotting to destroy the planet, some combination of super-powered heroes have to work to save the Earth from its fate - time and again yet it never becomes particularly tiresome. Each story arc has just enough to make it distinctive and capable of one-upping what came before to ensure that every yarn it spins is engaging to watch, and the twists and turns of its narrative normally arrive at just the right time to avoid the series slowing to a complete crawl and getting bogged down in any one scenario. In other words, even these final episodes of Dragon Ball Z are a lot of fun to watch - as per the rest of the series it never takes itself entirely seriously yet also exhibits enough restraint to avoid descending into farce.

Of course, distinctive though this ninth season manages to be it is largely just a rehashing of the story that this series has told time and again, and this could well be a cycle too far for some viewers, and it certainly doesn't managed to match the majesty of its earliest story arcs that occurred before most of its main cast reached levels of super-powered insanity. This finale also outstays its welcome ever so slightly via an elongated ending that actually detracts a little from what would otherwise have been a satisfying climax - you could perhaps argue that it's nice to see the cast moving on at the end of all the action, but it's not the most interesting way to bring things to a close.

Of course, given that this is the ninth and final season, I would imagine you don't need to be told whether to buy this volume of the series or not - who'd buy the first eight seasons and then not the ninth? Assuming we're preaching to the converted as it is, you can rest assured that the quality of this release is the same as prior seasons of Dragon Ball Z - the same language tracks and "marathon mode" feature are on offer, the video and audio quality are as good as you're going to get shy of a Blu-Ray remaster, and the overall package is a satisfying one.

Looking back upon my Dragon Ball Z adventure at the end of it all, I recall beginning our epic quest to review this series in full wondering what I was letting myself in for. Yet here we are over a year later, and I have to confess that I never got bored of sitting down to watch this series, proving that there's more to this show than simple nostalgia value and that it's still a fun experience for complete newcomers to the Dragon Ball universe. That, above all else, is validation that the long-lasting warmth of fans towards the show, and its subsequent place as something of a classic in its own right, is very much justified.

7
An entertaining and enjoyable end to an enjoyable series that has proved that it deserves a place in the hearts of anime fans.
LATEST REVIEWS