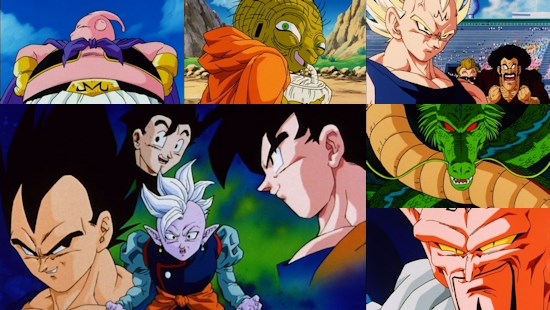 It seems like only yesterday when our Dragon Ball Z adventure began on DVD here in the UK, yet here we are having finished watching its penultimate volume. The end is in sight and things are getting serious again for our group of super-powered saviours of the world, but what does this eighth season have to offer those of us who have stuck with the series to this point?

With the latest world fighting tournament thrown into chaos of Gohan drained of his powers by some mysterious assailants, Goku and the Supreme Kai (later joined by a recovering Gohan) give chase and quickly come across the mastermind of whatever plan is in progress - a powerful wizard named Babidi who already has control of the king of the demon world, Dabura, but who still has even loftier goals in mind.

In short, Babidi's goal is to resurrect Majin Buu, a childlike being with immense and seemingly unstoppable destructive power. Of course, Goku and company are having none of this, and proceed to fight their way through various weird, wonderful and supposedly powerful enemies, although for all of that supposed power most of them prove to be as tough to knock down as a teetering domino.

However, not everything that stands before our heroes will be quite this trivial to overcome, and some major sacrifices combined with another round of training from some of its players will be required for there to be any hope of tackling Majin Buu and putting a halt to Babidi's nefarious plan.

It's something of a testament to this show's sense of entertainment that even at this late stage of the series, with the plot painted into something of a corner on account of the ludicrous power levels of its characters, Dragon Ball Z still manages to be a whole lot of fun to watch. Indeed, perhaps the best part of this eighth season is watching it acknowledge that yes, the main cast of characters are as powerful as Gods at this point, but that doesn't mean watching them whale on lesser mortals doesn't have to be enjoyable.

There's actually a fair amount of frivolity to be found throughout these episodes, but that doesn't mean that this season has an "end of term" feel, as there are also some deadly serious moments and scenarios to offset any laughs - while these moments arguably fall a little flat thanks to the those pesky Dragon Balls always loitering around to reset the world on a whim, there are still just enough moments of heartfelt drama to at least bring a little tension and humanity to proceedings.

Visually, the series continues to revel in bringing us ever-more weird and wonderful characters to add to its colourful world - yes, a lot of them feel like they were made up on the spot, but again the show's larger than life demeanour allows it to get away with a lot along these lines, and the English voice cast continue to back up proceedings with an energetic and fun delivery of events as they pan out into the bargain.

If you've made it through the highs and lows, successes and failures of Dragon Ball Z after seven seasons on DVD, you probably don't need to hear my thoughts on the eighth - I could have filled this precious slither of space with a discussion of the year's best albums so far, or the politics of the Caymen Islands. But, as you're still here - this collection of episodes is a surprisingly strong one for a series that has already made its way through two hundred episodes. It certainly isn't as strong as the heady days of the Saiyan and Frieza sagas, but it's enjoyable in its own right and manages to make enough good use of its cast and scenarios to keep things fresh and ensure the entertainment keeps on coming.

I almost feel like this shouldn't be something I confess to in public, but I think I might actually miss watching Dragon Ball Z a little once its ninth and final instalment is over.

7
It might be late in the series, but Dragon Ball Z still knows how to strut its stuff in the name of entertainment.
LATEST REVIEWS