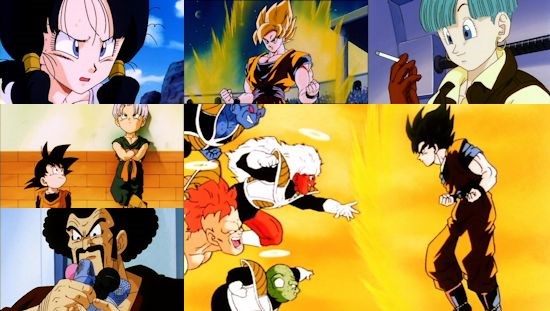 Having been immersed in more Dragon Ball Z than any sane human being might wish to be since the start of Manga Entertainment releasing said series on DVD here in the UK, I've finally been able to enjoy a bit of a breather before sitting down to watch this seventh batch of episodes. Now I'm suitably refreshed, let's see what's up next in this show's crazy world...

By the end of the previous season, Cell had finally been defeated and destroyed, and the Earth is safe from harm once again - but at quite a substantial cost, with Goku unable (and more importantly unwilling) to be revived from the dead yet again. Not that there's any rest for our hero in the afterlife, as a meeting with the Grand Kai of this realm leads only to a showdown against some familiar villains, although in this particular environment they're disposed of far more easily.

One otherworldly fighting tournament later, our focus returns to the Earth as we fast forward to re-join Gohan as a teenager, which can mean only one thing - it's off to high school! With a new brother named Goten to replace Gohan's role within the series, it's all change right the way down to a new series of opening and ending credits.

After spending some time following Gohan as he decides to create a superhero alter ego to make use of his powers, we see this decision threaten to backfire on him as he struggles to keep his identity a secret; an issue which is particularly problematic when it comes to classmate and daughter of Mr. Satan, Videl. Ultimately, Gohan's attempts to prevent his identity from being revealed leads to him taking part in the latest world fighting tournament - alongside his father, who has a day release from the afterlife - a setup which is really little more than a lead in to the events which will occupy season eight thanks to the appearance of some unusual participants.

Even though this series cops out of some of its attempts to refresh its cast and formula (Goku is quickly brought back into the frame after that failed attempt to write him out of the series), it still succeeds in freshening things up a bit - a grown-up Gohan adds a new dimension to proceedings, and Videl is a fantastic addition to the show in her own right.

Then again, one thing that is far from fresh about this set of episodes is the continued reliance on the fighting tournament as a plot device - so soon after the Cell Games, this return to a similar premise for two story arcs within this season feels rather repetitive, and fun though it can be it's a path that's a little too well-trodden at this point in time. Still, interesting developments are afoot for the next bunch of episodes, so as a lead-in to that particular story arc this material really isn't all that bad.

Beyond the content of these episodes, there really isn't much to say that we haven't discussed before in terms of Manga Entertainment's previous Dragon Ball Z releases - some may dislike the cropped widescreen aspect ratio but aside from very occasional scenes that look badly framed it works fine and looks great, the English dub is still a whole lot of fun, and the presence of marathon mode is manna from heaven for a reviewer who decides to watch the entire seventh season in a single day. Yes, I really did do that...

Now that we're over nine thousand... sorry, over two hundred episodes in, I'm sure you all know exactly what your power level is when it comes to watching Dragon Ball Z, so I don't need to tell you whether to buy this particular collection or not. Broadly speaking though, this is a decent if a little repetitive set of story arcs that is fun enough to watch, offering up more time with your favourite characters and introducing some strong newcomers to boot.

6
It threatens to be a fighting tournament too far, but even at this stage Dragon Ball Z remains a fun viewing experience, freshened up by some cast changes and alterations into the bargain.
LATEST REVIEWS