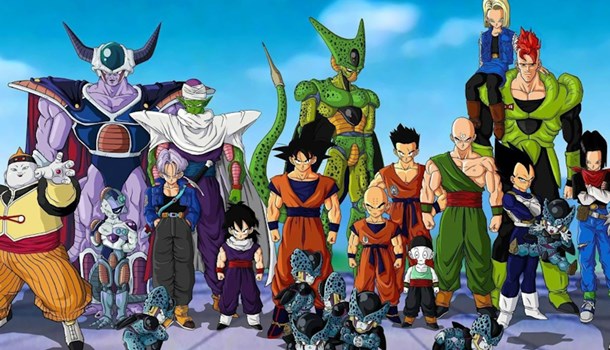 Thanks to the wonders of the British postal system - and far be it from me to suggest that there are light-fingered postmen in existence but Dragon Ball Z discs sure seem to go missing a lot in my neck of the woods - we're decidedly late with this review of the fifth batch of Dragon Ball Z episodes.  But hey better late than never, right?

Dropping us back into the midst of its potential Android Armageddon, and consisting of "only" twenty-six episodes, this fifth season of Dragon Ball Z seems determined to ramp the peril facing the Earth upwards and upwards.  As if those three marauding Androids with designs on facing off against Goku weren't trouble enough, news reports start to trickle in of a terrifying phenomenon, with the populace of entire towns simply vanishing.  Couple this with the discovery of another Capsule Corp time machine in the middle of nowhere that doesn't seem to belong to Trunks, and something is afoot that most certainly isn't good news.

A little investigation soon leads us to the cause of all these disappearing townsfolk - a decidedly alien in appearance being who calls himself Cell, whose idea of a good time is literally sucking things dry to both annihilate them and absorb their powers.  With a confusing power signature to sit alongside this rather disagreeable taste in eating living things, it appears that Cell is a major threat, especially when set alongside the fact that the gang already have their hands full with rampaging androids.

Eventually, of course, it comes to light that the two threats are not entirely unrelated - far from it in fact - leaving a far simpler problem for all and sundry to face.  Namely, who has the power to defeat Cell before he achieves his goal, and can they also deal with those pesky androids while they're at it?

Unfortunately, we won't get our answer in this particular box set, but we do get some bursts of action set against lots of hard work for some of the show's major players to power themselves up to a sufficient degree to have a fighting chance against their myriad opponents with the planet's future at stake once again.

In other words, this fifth season of Dragon Ball Z is very... well, like Dragon Ball Z - a constant cycle of battling, ever-increasing stakes and similarly increasing power levels.  It's the kind of heady mixture that has made the series so fun and enjoyably bonkers to watch for the most part, although while the series managed to elongate its story during the Freeza saga without impacting its entertainment value too much it doesn't manage to pull off quite the same trick here.  Put simply, things move far too slowly after Cell's appearance on the scene, and a saga that feels like it should end at the end of this box set instead positions itself to drag on into season six, thus outstaying its welcome.  That I'm only feeling this for the first time after over 150 episodes is probably some pretty high praise for Dragon Ball Z's quality to this point, but it also speaks to the fact that the contents of this season could have been comfortably compressed down quite substantially.

Away from its story, everything is present and correct in this latest release in the series from Manga Entertainment - its odd layout of episodes across six discs (with only three episodes on some of these DVDs) is a little baffling, but that aside video, subtitle and dub quality are all top-notch, and the continued presence of "marathon mode" here makes watching a bunch of episodes en masse far easier for the viewer.

If you're collecting this series then Dragon Ball Z's fifth season certainly isn't bad or something you should avoid entirely - it still contains plenty of the hallmarks of what makes the show what it is, it simply leans upon them a little too long and hard when it should be spending more time progressing its story.

6
Everything that makes Dragon Ball Z enjoyable is still present and correct, but this story arc drags its heels markedly, which is to its detriment.
LATEST REVIEWS