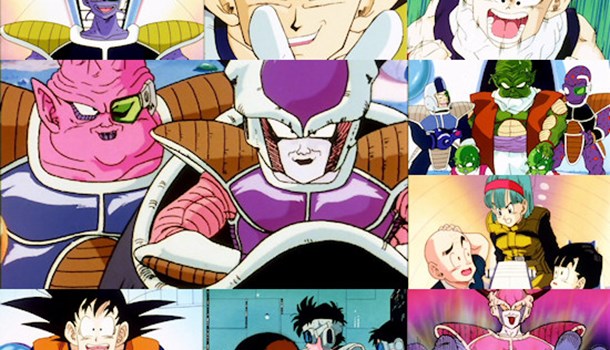 The Earth is safe from the Saiyan threat, Vegeta has been sent fleeing from the planet with his tail between his legs and all is peaceful after the chaos caused by that unexpected invasion.  If you think that's the end of the Dragon Ball Z saga though, you'd be very much mistaken...

Given the losses suffered in the epic battle with Vegeta, the need for a new set of Dragon Balls is beyond question, and following on from the end of series one this second season of Dragon Ball Z sees us re-join Bulma, Krillin and Gohan as they set off to the world responsible for the creation of Dragon Balls, Namek.  Although most of their long journey passes without incident, needless to say space isn't always the friendliest of places, and our intrepid trio get ensnared in a couple of potentially deadly situations before finally reaching their destination.  Thanks to those distractions, we're also appraised of an even more deadly force in the vicinity - Frieza (or Freeza, depending on your viewing preferences), who effectively acts as an overseer to the Saiyans and their planet purging work, and is a feared figure even by the likes of Vegeta.

Thanks to recent events, it seems that everyone wants a piece of (or more precisely, all of) the Dragon Balls, and as a result this second series largely consists of a non-stop hunt for said devices - as well as our human trio, Vegeta and Frieza also have designs on these magical, wish-granting tools, and needless to say they're willing to get their hands on them by fair means or foul.  With the threat growing exponentially by the episode, Gohan also travels to Namek to join the fray, but he's going to need to make some uneasy truces and call on even greater power if he is to have any hope of assisting his friends in achieving their goal...

With another thirty-five episodes spread across its six discs, come the end of this second series of Dragon Ball Z you should be left with no doubts as to its make-up even if you're a newcomer (as I am) to the franchise - an obsession with power levels and strength, battles filled with twists and turns and a wide enough variety of story beats to ensure that there's always something interesting going on.  It's this last point on the show's check list of elements which is arguably its most important - rather than focusing solely on a single battle or set of circumstances for a protracted period of time, the series sensibly jumps off elsewhere from time to time, either to offer up some comic relief or to offer a change of pace in some other fashion.  You won't be surprised by anything that happens on-screen as you can see most of it coming from a mile off, but that doesn't stop it from being entertaining for the most part.

The continued success of the series in keeping the viewer's interest is largely down to its colourful, "anything goes" universe, which has no shortage of larger than life characters in the midst of a scenario so outlandish that you can really have no complaint when anything can happen and usually does.  If you're so inclined you could complain about myriad plot holes, but to do so in such a zany show which never takes itself too seriously would seem rather churlish.

Visually, everything within this second series is as it was with the first - the show's animation is certainly showing its age these days, but this DVD remaster is colourful and as clean as you could hope for.  Shifting this release to 16:9 aspect ratio has, of course, cropped the top and bottom of the picture in deference to a better horizontal resolution, and oddly this seems to be more noticeable on these discs than it was with season one, perhaps simply due to the tighter framing of shots in these episodes.  With a choice of English and Japanese audio alongside an English "broadcast audio" track, there's no shortage of options here, and I have to admit that as the series goes on I'm finding the admittedly over-the-top English dub to be preferable to the Japanese audio, even if the introduction of the Ginyu Force's Jeice brings us the worst attempt at an accent since Dick van Dyke in Mary Poppins.

On a personal note, I admit that I was fully expecting my enjoyment of Dragon Ball Z to wane once its first major story arc was done and dusted, and as a result I've been rather surprised to find my enthusiasm remain undimmed for this second series. Above all else it remains a well-constructed example of "shounen anime done right" - it's pacing is nigh-on perfect and it knows when to poke fun at itself or its range of increasingly ridiculous characters while it lets loose its unique brand of super-powered insanity.

In short, this second series of Dragon Ball Z is as much fun to watch as the first - although this won't be news to seasoned viewers of the show from days gone by, it's a notable comment for newcomers to the franchise who might still be hesitant at dipping their toe into these potent waters.

7
The story arc and numerous characters might be new, but the sense of fun and well-paced entertainment remains the same for this second series.
LATEST REVIEWS