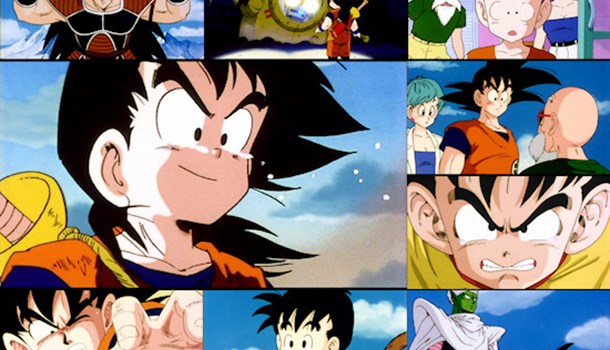 During my time writing for UK Anime, possibly the most asked question from readers has been "will Dragon Ball Z ever be released in the UK?" or some variant thereof.  Well, we now have our answer, as July 2012 sees the first of nine "orange brick" complete season box sets of the series reach the UK at last courtesy of Manga Entertainment - a most definite case of better late than never, if you ask me.

Oddly, despite the constant hype surrounding the series and its place in the heart of an entire generation of kids as their after-school viewing of choice, I've never actually watched Dragon Ball Z up to this point - again though, I'm going to stick by that "better late than never" principle and use the opportunity of this UK DVD release to fill that shameful hole in my anime experiences; a hole which will hopefully leave my opinions free of any rose-tinted memories of my youth and the like.

For those perhaps unfamiliar with the franchise, Dragon Ball Z is in fact an adaptation of the second half of Akira Toriyama's original Dragon Ball manga, which begins its story five years after Piccolo's defeat in the initial anime adaptation as we're introduced to an Earth which is enjoying some peace and quiet... for now.  The early episodes of this first season set of Dragon Ball Z do their best to fill in the gaps for those not familiar with the original Dragon Ball series, and although there are undoubtedly some nuances which are missed by jumping straight into Z all of the major points of note are either covered directly or inferred in such a way that you'll soon be up to speed with everything that you need to know.

No sooner have we tuned into these visions of a peaceful planet is that peace shattered as a metallic sphere crashes to Earth from outer space.  More important however is the contents of that sphere - a man-like being known as a Saiyan, who has arrived to find his missing brother and join him in the extermination of the human race so that the planet can be sold off to the highest bidder.

Unfortunately for Raditz, the Saiyan in question, his brother isn't just any old fellow - he is in fact a hero in his own right, and what's more he has a wife and son to worry about into the bargain.  While the few remaining Saiyans know him as Kakarrot, this individual is better known to his friends as Goku, and after a shocking reunion with his brother reveals the truth about his past to Goku, his refusal to join Raditz in conquering humanity can only lead to one result - an intense bout of fisticuffs that sees even former arch-enemy Piccolo joining forces with Goku for the good of Earth's safety.

This literal fight to the death against Raditz is, of course, only the beginning - seeing him off is merely a respite, giving Goku and company a year to regroup and train to face an even greater threat as another pair of Saiyans begin their journey to finish what their comrade started.  With even Goku's son Gohan co-opted into training, this gives us both a change of pace and a chance to become better acquainted with all of the show's main players before the Saiyan threat reaches Earth, switching us well and truly back into shounen battle manga mode for the second half of this first season of the series.

Despite a High Definition remastering treatment for this particular release of the series, there's no hiding the quality of Dragon Ball Z's animation, which is decidedly scrappy throughout - this certainly isn't the most beautiful show you've ever seen, that's for sure.  That said, there is a certain retro charm to its visuals, and they succeed in being undeniably expressive and packed with easily recognisable characters despite (or perhaps because of) their simplicity.  This remastered edition of the series has to be lauded in bringing a mostly clean and crisp widescreen transfer to the masses, which will leave purists condemning the loss of some of the vertical imagery from the original 4:3 version but looks as good as the show is ever likely to for the vast majority.

In terms of audio, viewers are spoilt for choice by this release - the hardcore will be pleased at the inclusion of the original mono Japanese audio track complete with subtitles, while those with a preference for the English dub can choose from a shiny new (and great sounding) 5.1 surround sound mix with remastered Japanese background music, or the stereo US broadcast track which sees its background music replaced entirely with a "heavier", more insistent score.  The only gripe here is the replacement of the show's English opening theme with something entirely more generic, doubtless due to rights issues - still, the English dub is top-notch for the most part even if its voiceover segments are more insistent in explaining every last nuance of the series as though the viewers are idiots; the subtitles are good aside from an error here and there, and the Japanese audio suffers from only being a mono recording but is still entertaining in its own right.

As for the series itself, I have to confess that I enjoyed it far more than I expected myself to given my lack of previous indoctrination into the world of Dragon Ball during my misspent youth - the series at this early stage utterly revels in its storyline which clearly makes things up as it goes along, throwing in dinosaurs here and robots there in a world already peppered with talking animals to make for a decidedly bonkers chunk of fun entertainment that never takes itself too seriously even when there's death or global annihilation just around the corner.  That isn't to say that the show has no emotional core - it can still catch you off-guard with a poignant or upsetting moment to confirm that it's won you over with its cast and the tales of friendship and mutual respect redolent within it.

Perhaps equally important for this first season of Dragon Ball Z is its pacing - things keep on moving at a fair clip, with the switch from fighting to training and then back to an epic battle keeping things fresh, while the twists and turns within the show's first major scraps also helping to progress the story arc at a reasonable pace without breaking the conventions that have since become stalwarts of the shounen battle series genre.

For those still filled with those misty-eyed reminiscences of Dragon Ball Z in their youth, there's probably no need for me to espouse your consideration in picking up the show's UK release as you're most likely already salivating at the prospect of watching or collecting this blast from your past again.  For those unfamiliar with the series up to this point, the question as to whether Dragon Ball Z is for you is a rather more difficult one - with almost three hundred episodes across nine box sets to watch, it's a daunting proposition both financially and in terms of burning up an obscene amount of your time.  While I'm in no position to judge the series as a whole (and of course we'll be reviewing future season sets in their own right), if nothing else this opening gambit for the show was an undeniably enjoyable one to watch, providing a daft and occasionally childish but surprisingly entertaining package that produced that all-important "just one more episode" reaction to keep me trucking through all six DVDs and thirty-nine episodes in no time at all, and making it a worthy watch even as a standalone purchase.

Ultimately, if you've been looking for a suitable opportunity to immerse yourself in this Japanese pop culture classic, there has been no better time to do so.

English 5.1 surround and stereo US broadcast audio; Japanese mono audio with English subtitles.  Extras on the final DVD of this six-disc set comprise text-free opening and ending credits and two extras on the US remastering of the series - "Dragon Ball Z: Rebirth" and "A New Look".

7
The beginnings of this cult classic actually stand up well in their own right, to provide an entertaining tale which has endured far better than its ropey animation.
LATEST REVIEWS