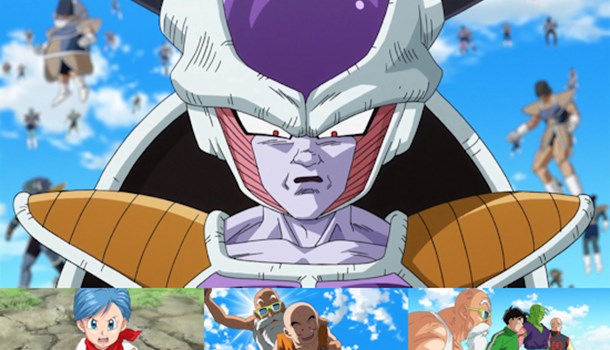 Destroying the maniacal leader of an evil empire is all well and good, but even if you obliterate them completely then all you're doing is destroying one (albeit notable) individual. Do you really think there's no chain of command within the Galactic Empire? The Decepticons? The Frieza Force?

It may be named after the infamous villain who came to represent the pinnacle of Dragon Ball Z, but the Frieza Force didn't simply disband after the demise of its leader; indeed, it has continued to run in reduced circumstances under the command of a man... no, a koala... no, an alien... look, it doesn't matter, named Sorbet. He may be small of stature and hardly the most menacing of villains, but he has a plan - to locate and use the Dragon Balls to resurrect Lord Frieza and return him to his rightful place in the world.

If this sounds like a mammoth task in itself, then think again - in spite of everything you might know from previous iterations of this franchise about the difficulties of collecting and using all of the Dragon Balls, on this occasion it's pulled off unremarkably and without issue in a matter of mere minutes. Thus, Frieza is resurrected, albeit into the dismembered and diced up body we remember from his demise in Dragon Ball Z - a trifle given that the Frieza Force now possess the technology to restore and completely reconstruct even the most badly damaged of bodies provided a living soul resides inside it.

It isn't too much of a spoiler to say that Frieza is back, and that he's hungry for revenge against those who sent him to a torturous afterlife in Earth's Hell (which may not quite match what you've read in the Bible). Given the news of Goku's subsequent victories over the like of Majin Buu however, it seems that even the previously fearsome Frieza may need to undertake some training to be able to stand toe-to-toe with his Super Saiyan foe. Again, this might be where you expect an incredibly long-winded training montage, but not here - the next thing we know its several months later and Frieza is on his way to Earth with an assembled army in tow. If you haven't noticed by this point, Resurrection F isn't messing around when it comes to its pacing.

With all of the preamble out of the way, we get down to the nitty gritty of the film - first, an opportunity for all of Dragon Ball Z's other prominent heroes (plus Jaco the Galactic Patrolman, who makes a rather wonderful appearance and occasionally threatens to steal the show) to get a moment in the sun as they fend off Frieza's massed troops, followed by what we've really been waiting for as the new, improved Goku and Frieza face-off. Much like Battle of Gods, this is a film that knows its audience and isn't afraid to cater to them.

In those terms, Resurrection F certainly delivers - its action is engaging to watch, slick and stylish (if you ignore the terrible-looking CG for Frieza's massed army) and sprinkled with just the right doses of comedy doses both within the main battles and at the periphery of them to stop things from getting too heavy. Never mind the future of the Earth in other words, this movie knows you're here for a fun time and that is its top priority. If you're looking for anything approaching the darker, more morbid versions of the original Frieza saga, then you'll find them in short supply here.

You could probably argue that this unwillingness to ever really ramp up the film's dramatic tension is the biggest black mark against Resurrection F - in spite of Frieza's ferocious reputation and improved abilities he feels like the underdog from beginning to end, and even the potential for a big, shocking moment is dissolved by the answer to this moment of abject despair and peril being signposted in big proverbial neon lights earlier in the movie. It almost makes it feel as if the film is afraid to scare or concern its audience by having them think for a moment that the heroes might lose this battle, which is out of character for a franchise that normally revels in putting its lead characters on the ropes and at (or even beyond) death's door. Perhaps this is simply the face of the new, even more family friendly Dragon Ball Z for the 21st century, but it certainly lacks the ability to make you sit up in your seat and wonder how your heroes are going to fight their way out of peril this time.

Having mentioned the appearances of the Frieza's Force's ugly CG army, these are thankfully the only moments that felt truly jarring in terms of the film's animation quality in spite of other clear uses of CG throughout which fitted better into the overall aesthetic of the movie. It rarely went too far wrong, but we will admit that the film didn't particularly feel like an "experience" on the big screen for the most part; it never seemed to be stretching itself and simply delivered everything that it both needed and intended to without issue. Meanwhile, the film's English cast were all on point in bringing across the comedy and energy required across the board, which should please long-standing fans no end.

It's always difficult to sit down and talk about any new addition to the Dragon Ball Z universe - it's a franchise so deeply entwined into the memories of so many people, most of them entirely unique and in turn driving so many differing expectations that unpacking it in broad terms is a folly. If you're looking for laughs and pure, unadulterated entertainment from a Dragon Ball Z movie then Battle of Gods is perhaps a better film in that regard, but by the same token Resurrection F is a return to the more action-oriented fare - and with bloody Frieza in it no less - which will highly please other sets of fans instead.

In some ways, the return of Frieza in itself is enough to create unrealistic expectations of Resurrection F - even the best animation and story-telling in the world can't compete with the rampant imagination of fans as to what that might be involve. It's perhaps this situation that can make Resurrection F feel a little reserved, or even quaint; it certainly isn't as bombastic as you might expect, but that isn't to suggest that this is anything other than a highly enjoyable movie that will give fans plenty to enjoy.

Dragon Ball Z: Resurrection F screened in cinemas across the UK on Wednesday, 30th September 2015, with further screenings and a home video release to follow

7
An entertaining mix of comedy and action that knows what fans want and delivers ably, even if it feels a little reserved in its story-telling.
LATEST REVIEWS