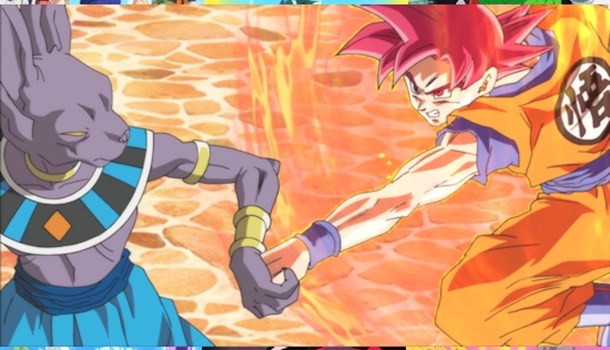 Given the enduring popularity and success of Dragon Ball, it's rather surprising to realise that the subject of today's review is the first all-new anime material from the franchise since 1996. Then again as the saying goes, "absence makes the heart grow fonder", so although we've seen a flood of Dragon Ball releases on DVD in the UK over the past couple of years will our heart skip a beat at the arrival of Battle of Gods on our shores?

After a brief, two-minute recap on the entire Dragon Ball saga to kick things off (in the Director's Cut edition of the film, at least - this is excised from the theatrical version), we're quickly introduced to the subject of this eighteenth Dragon Ball movie - a cat-like creature named Lord Beerus who is heralded as a God of destruction. He might not look the part, and even his loyal servant Whis seems to get away with murder around him, but Beerus' awakening from a long slumber sets alarm bells of a different kind ringing across the galaxy. Renowned for his short temper and tendency to obliterate entire worlds on a whim, nobody wants to deal with Lord Beerus on their turf, and they certainly don't want him bumping into an inflammatory sort like Goku or Vegeta.

Unfortunately, Beerus has awoken with one very specific reason in mind - to meet a "Super Saiyan God" who has been prophesised as a rival worthy of the name to this deity. Needless to say, his first port of call when it comes to learning about this Super Saiyan God is to track down the few living Saiyans still at large, which leads him first to Goku and a brief sparring session which shows the extent of his powers, before he then makes a bee-line for... Bulma's birthday party back on Earth.

So, the scene is set, with Vegeta desperately trying to keep Beerus out of trouble and away from anything which might provoke his ire - rather difficult when your wife has been on the booze and the entire Dragon Ball cast are letting their hair down and trying to have a good time. Given the circumstances, Beerus' desire to destroy the planet is bound to be inflamed at some point, even if the ultimate cause of his irritation is decidedly ungodlike.

If you're expecting this new Dragon Ball Z movie to delve into the kind of major peril and action-oriented drama of some of the original series most notable story arcs, then think again - Battle of Gods is largely a love letter to the series which spawned it, and a major dose of fan service in the purest respect. Indeed, you can probably guess this just from the mention that Bulma's birthday party is the setting for the film - it offers a perfect opportunity for the entire Dragon Ball cast to congregate, play up to (and occasionally subvert) their well-established characters and have some new moments in the spotlight.

In that sense, Battle of Gods is pitch-perfect - packed to the rafters with call-backs and in-jokes and making full use of its cast and your established pre-conceptions of them, which is just what you might expect of a film whose screenplay is co-written by Akira Toriyama himself. For the most part, this humours take on the film's scenario works incredibly well, and although newcomers will feel completely left out (recap introduction be damned) existing Dragon Ball Z fans will undoubtedly come to the end of the film with a smile upon their face... assuming it's Dragon Ball's sense of humour that you love, that is. In terms of its quote of action, Battle of Gods is substantially weaker - yes, its climactic battle hits all of the right notes, but if you desire something a little more serious and highly strung then this won't be enough to satisfy you.

As we've already mentioned, two revisions of the film are included on this Blu-ray disc - the theatrical cut, and a Director's Cut which includes an additional twenty minutes of footage. To be quite honest, the theatrical edition of the film is by far the better of the two - the largely superfluous scenes excised from that version that are left in place in the Director's Cut are mostly of a low power level, only serving to break the film's flow and make it feel a little flabby rather than the lean or mean shorter version. Yes, there are a couple of pretty decent gags that never made it into the theatrical cut, but most of what hit the cutting room floor during the creation of that original version of the film clearly did so with good reason.

Visually, the film is a mixed bag - much like their attempt to revisit Sailor Moon of late, there's something "off" about Toei Animation's modern take on their classic shows. Yes, the cast look and act the same, but there's an indefinable character and sense of passion that has been lost by the cold, competent yet less emotive look of Dragon Ball Z circa 2013 compared to the series that spawned it. That said, there are some truly impressive scenes scattered through the film, and every moment of clumsy CG is matched by just as many truly impressive ones. As a whole, the film looks good and transcends its less eye-catching moments, even if it lacks a certain something in its overall presentation.

Perhaps unsurprisingly given that it's the English language version of Dragon Ball Z that sits so close to the hearts of most viewers, it's the English dub that remains the better viewing experience of this new film too - it feels more punchy and its cast more enthusiastic, and the fact that random celebrities aren't crammed into the English reversioning as they were into the Japanese language track probably also serves it in good favour. What's more, the Japanese audio track is bizarrely only a stereo affair on this UK release, and thus loses the dynamism of the English audio that comes from its full 5.1 audio mix. Still, if you do want to watch the movie in Japanese, we have few complaints about the quality of the subtitles available here.

While the Blu-ray edition of the film reviewed here is entirely free of extras, the Collector's Edition Blu-ray also contains the film on DVD, and with it a batch of Standard Definition bonus materials that we don't have access to and thus can't comment on for this review. If you want some US case-centric extras though, make sure you plump for the Collector's Edition.

Whether Battle of Gods will appeal to you will depend largely on what you desire from the franchise - simply the fact that it's the first new Dragon Ball Z material in a long time gives it something of a free pass, but it's certainly more of a comedy-centric nostalgia trip than an action-packed, high tension affair. It's this very reason that made me rather luke-warm on the film the first time I saw it, but the combination of its more energetic English dub and a softening on my hard (and frankly foolish) stance that "Dragon Ball Z is serious business" has made me cave in and admit that yes, this is a really fun movie, and one that is best consumed with beer, snacks and a bunch of friends with a deep nostalgia for the original series. Get all of those elements together, and Battle of Gods is more fun than any number of Bulma's birthday parties.

English 5.1 DTS-HD Master Audio and Japanese stereo audio with English subtitles. All editions of the film contain both the theatrical and director's cuts of the movie.

Extras on the Collector's Edition (not reviewed here) consist of a US trailer, text-free closing credits, and both The Voices Of Dragon Ball Z: Unveiled and Behind The Scenes: Battle Of Voice Actors features.

7
It's a fun nostalgia trip rather than a recreation of what made you love Dragon Ball Z so much in years gone by, but that doesn't prevent watching Battle of Gods from being an enjoyable viewing experience.
LATEST REVIEWS