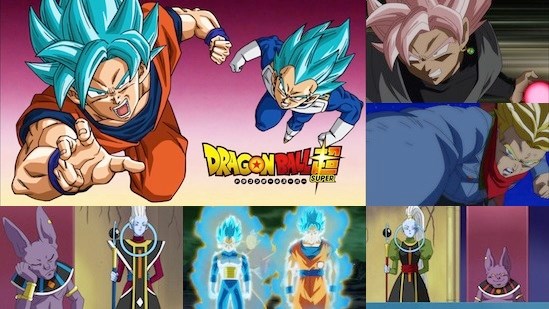 After staging an impressive comeback in the past few years with two feature films, last year the Dragon Ball franchise finally made its first proper return to television screens in 18 years with Dragon Ball Super – a new series headed up by Akira Toriyama himself. However the long wait for new content seems almost manageable in comparison to the agony fans had to endure before the show was properly available to Western audiences, as Toei Animation seemed to hold a death grip on the distribution rights. However in the past few weeks things have been looking up for fans, as not only have Funimation announced that an English dub is in production but the show is finally available as a simulcast. Viewers were thrust into the show’s fourth arc, with older episodes uploaded in batches of ten on a weekly basis.

Having seemingly become stronger than every mortal in the known universe, Son Goku and his eternal rival Vegeta must now turn to parallel worlds and the gods themselves to find suitable opponents. After facing off against the god of destruction Beerus and a revived Freeza, Earth’s strongest fighters take part in a tournament against fighters from Universe 6 – a parallel universe with its own god of destruction. The prize – a wish from the Super Dragon Balls, planet-sized orbs far stronger than anything previously seen on both Earth and Namek. Following that, the Saiyans are greeted by a familiar face as Vegeta’s son Trunks returns from his dystopian future seeking help. The threat of the androids may now be over, but a new opponent has arisen – Black, a mysterious figure who both looks and sounds like Goku himself.

Despite all the hype surrounding the series, Dragon Ball Super does not get off to a very good start. Rather than continue on from the two well-received films still fresh in everyone’s minds, Super bizarrely decided to retell both Battle of Gods and Resurrection ‘F’ in full-blown arcs, making minimal changes to their plots along the way. The end result is two arcs which are both bloated and unexciting, with the changes made to each of them arbitrary at best. Neither has the same punch that their film equivalents had, and were only further ridiculed by fans worldwide thanks to the shoddy animation displayed during their TV airings (which has since been fixed for the Japanese Blu-Ray releases). Rejecting the canonicity of both films isn’t just a massive shame, it managed to turn fans off Super before it had barely gotten off the ground. The handful of truly “new” content within these arcs is serviceable, but nothing that makes Super feel like anything more than a quick nostalgia-fuelled cash grab.

Things do begin to pick up though at episode 28 with the Champa/Universe 6 arc, the first truly new content Super has to offer which isn’t just a filler episode here or there. Dragon Ball is no stranger to a good old fashioned tournament arc, so seeing one here so soon shouldn’t come as any surprise. The arc also serves to remind fans that when it comes to Dragon Ball their nostalgia might have gotten the better of them, as the sometimes overly-comedic approach the show takes has always been riddled throughout the franchise. That said, tonally Super seems much more in-line with that of the original series than Z, and together with Z’s more action-orientated approach Super often seems like a perfect fusion of the two. Although this arc is prolonged in all the wrong places, it does well at capturing the wider universe Super is trying to create while cementing Beerus and his attendant Whis as two of the best characters Dragon Ball has ever come up with. Together they not only fulfil a good comic relief quota, but as characters significantly more powerful than the protagonists they also add a fresh dynamic to the show as well.

Finally we come to the Future Trunks arc, which is where everything finally begins to fall into place. Bringing back a firm fan favourite may seem like a cheap way to get everyone talking, but since then the arc has delivered time and time again and even before its conclusion is arguably able to stand up with Dragon Ball’s best. Now at the centre of his own arc Trunks is given a lot more to work with as a character, which also greatly benefits Vegeta as he continues to prove himself a far more interesting and engaging character than Goku has ever managed to muster. Their new opponents are Zamasu, an alternate universe Kaioshin with a god complex and Goku Black – a character whose origins are nowhere near as interesting as the show attempts to build up but still carries himself as an extremely engaging threat. A lot of this is down to Masako Nozawa’s chilling voice work, a stark contrast to the goofy variation she uses for the real Goku. While the pair’s “destroy humanity and rebuild the world” motivations are far from original, their arrogance and lengthy monologues which reference Trunks’ previous time-meddling from Dragonball Z offer a richer story that’s very easy to get absorbed into. More crucially the animation has received a sizeable boost in quality, now able to effectively pull off the fast-paced fight scenes that the show requires.

However the show still isn’t without its problems. Anyone whose favourite character was anyone but Goku or Vegeta is going to be sorely disappointed, because they are the only characters Dragon Ball is really about anymore. Piccolo has been relegated to Pan’s (Gohan’s infant daughter and main character of the non-canon Dragon Ball GT) loveable uncle figure, while Tien and Yamcha are almost completely forgotten. Even Gohan, one of Dragon Ball Z’s strongest characters, has very little to do with events anymore his fighting skills have declined heavily. The one time he does get back in action, he’s beaten pretty severely. On the other hand Bulma has now started playing a role far more deserving than anything she got in Z, given that she’s one of the franchise’s first and long-standing characters. The extended cast is then fleshed out by Beerus and Whis, young Trunks (with Goten occasionally in tow) and the Pilaf Gang – Dragon Ball’s original villain gang now transformed back into children prior to Battle of Gods. The Future Trunks arc also brings Trunks in as a third fighter to compliment Goku and Vegeta, with his world’s Mai also filling a role that would have previously sounded unfitting for her.

Additionally Dragon Ball Super doesn’t really seem concerned with explaining the smaller details, which can often lead to frustration during some of the show’s tenser moments. Questions like Trunk’s new form and Black’s growing powers are left mostly unanswered, piled alongside a convoluted timeline that gets harder to piece together as time goes on, a Trunks x Mai shipping that’s come out of nowhere and the fact future Trunks suddenly has blue hair as opposed to purple. But the truth is, the Dragon Ball franchise has never sweated the smaller things and is much more preoccupied with the shonen show traditions of piling on the action, upping the ante and ending each individual episode with cliffhanger after cliffhanger. Once it hits its stride Dragon Ball Super delivers on all three fronts, doing an excellent job of dispelling the bad taste left by the first batch of episodes.

If you’re the kind of person that feels they need to experience a show from the very beginning than prepare for a rocky start with Dragon Ball Super. If you’re a little more flexible, you might want to consider watching both the Battle of Gods and Resurrection ‘F’ movies, seeking out the one-shot filler episodes in Super’s early stages and then jumping straight in at episode 28. This way you get to ignore all the bad build up the show has and catch up just as the going gets good. Whether this new instalment will stand the test of time in the same way its predecessors did is still up in the air, but for now Dragon Ball Super has slid comfortably into its role as the current anime field’s staple action show.

7
A terrible start eventually gives way to the Dragon Ball we all know and love.