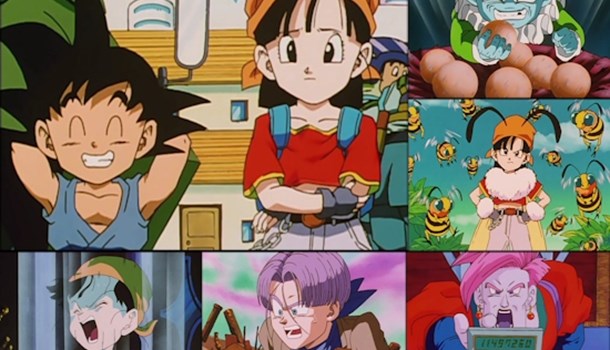 Dragon Ball Z ended with the Earth safe, and Goku training a new defender of this peace in his stead. But what happened next? Nothing, as far as Akira Toriyama's original manga is concerned, but that won't keep the money rolling in from a hugely successful franchise. Enter Dragon Ball GT, an original story based on Dragon Ball's much-loved roster of characters set after the events of Z.

Much of the early running of Dragon Ball GT concerns itself with getting its universe in order and ready for some new adventures - after packing off Uub to get him out of the way at the end of his training, cue the introduction of a new set of Dragon Balls and an incident where Emperor Pilaf trying to steal said Dragon Balls accidentally reverts Goku to his childhood body. These are no ordinary Dragon Balls however, and having been scattered to the corners of the universe they need to be collected again within a year to prevent them from exploding.

As setups go, it's incredibly cynical, clumsy and contrived as it sweeps away characters the producers assume the fans will have no interest in (which means goodbye to Uub aside from a relatively brief appearance later on), and alter others for maximum popularity (welcome Goku's childhood body). Still, once this is done it's off to explore the universe we go, with Goku joined by a grown-up Trunks and granddaughter Pan to retrieve the Dragon Balls before it's too late.

Needless to say this is no simple task, and the trio comes across various weird and wonderful perils via a meandering journey and numerous scrapes against the kind of typical baddies that you've come to expect from the Dragon Ball universe. The series only really settles down when it finds a significant enemy to focus on - a surviving member of a race known as Tuffles whose planet was obliterated by the Saiyans. Upon encountering Goku, the Tuffle known as Baby spots a perfect opportunity for vengeance, and before we know it the Earth is once again in danger as Baby seeks to use his abilities to subjugate the planet's people and make Goku the centrepiece of his revenge.

It's only when we reach this stage of proceedings that Dragon Ball GT comes close to matching the entertainment value of its predecessors - the meandering early adventures of Goku, Trunks and Pan aren't all that compelling as they flit around without any real sense of threat or tension, which drains these story arcs of anything notable beyond the odd fun moment here and there. By contrast, Baby's appearance on the scene ramps things up substantially, providing a compelling feeling of peril that is leveraged quickly and effectively when it gets down to the core of its story. Of course, from here we find ourselves faced with the prospect of episodes focused around training, as Goku has to hone his talents to save the planet once more, but even this at least feels sufficiently like a comfortable pair of Dragon Ball slippers to be revelled in to some extent.

Although not afforded quite the same top-notch level of remastering as Dragon Ball Z, this first half of Dragon Ball GT genuinely looks good - the odd imperfection of fleck of dust on cels aside it looks great, with suitably crisp and colourful scenes to ensure you won't be left bemoaning the show's visual treatment. Sadly, the same can't be said of audio quality for this UK release - the Japanese mono track feels as archaic as you'd expect, but the US Dolby Digital 5.1 track also has issues. We suspect that the problem here is down to a glitch in the pitch correction carried out as part of the NTSC to PAL conversion process, as across all five discs there's no shortage of incidents where character's voices "warble" during dialogue, oscillating in a weird way which makes them sound robotic on occasion. It's a frustrating issue that becomes almost unbearable in places - we don't have any other sources to compare with to state whether this is unique to the UK release, but either way it's a disappointing issue, although it does at least seem less marked (if present at all) on the US stereo broadcast audio track also provided on-disc.

After the stellar success of Dragon Ball Z, which has proved its long-lived popularity and entertainment value via its recent UK release, Dragon Ball GT feels like a bit of an oddity. We won't deny that there's a certain amount of enjoyment to be had at re-joining our favourite characters again (especially when they sport silly facial hair - yes, we're looking at you, Vegeta), but the way GT sets up its story is craven in its aversion to delivering anything new and it takes a lot of episodes before it finds a story capable of coming close to recreating that Dragon Ball Z magic.

The fact that we have a story that feels like it could deliver something of similar quality to its predecessor is admittedly a pretty good hook into the second half of the series though, provided you're willing to put up with the aforementioned audio issue and the stuttering story-telling of Dragon Ball GT's early reckoning. Certainly, Dragon Ball die-hards might want this release just for the sake of keeping their collection complete (particularly with the original Dragon Ball series coming to the UK later this year), but make no mistake that this is no Dragon Ball Z. Then again, what is?

English 5.1, Japanese mono and English stereo US broadcast audio with English subtitles.  There are no extras contained on these discs.

5
It takes a long time to get going and audio issues mar the viewing experience, but these episodes do hit upon a promising story arc eventually to show hints of the classic Dragon Ball formula.
LATEST REVIEWS