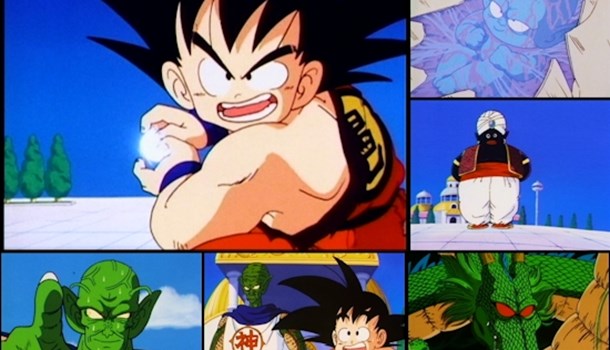 Over the past couple of years it feels like my calendar has been dominated by the Dragon Ball franchise, with huge gobs of it landing on my doorstep every few months, in turn precipitating frenzied viewing sessions to work through the multitude of discs of which each release is constructed. Well, those days are now at an end - Dragon Ball Z is long gone from my "discs to review" pile, Dragon Ball GT was dismissed with little trouble, and now the original Dragon Ball series on DVD has also come to an end.

Season four of the series left us with a mixture of joy and relief - King Piccolo was defeated by Goku, and the world was safe from his tyranny once again. But is that really the end of the story? There's another four DVDs packed with episodes to work through here, so of course not. For starters, there are a number of fatalities to consider that need to be rectified to ensure that this is no more than a hollow victory - a difficult proposition given the obliteration of the Eternal Dragon who might have brought them back to life - and just as importantly the departing King chose to leave Earth a little "present" before his demise.

It's this parting gift which occupies much of this final series of episodes, with Piccolo Junior biding his time to make his appearance in the most impactful way possible - at the latest World Martial Arts Tournament. Yes, that's right, the series ends exactly how you might expect it, with another non-stop bout of tournament-best fighting action, albeit one with higher stakes than ever as Piccolo seeks to put everyone who might stand against him out of action so that he can succeed where his father failed. Of course, Goku hasn't exactly been slacking in the intervening period, although he'll need to be at his best and beyond to win through as both old friends and foes make an appearance as we build up to the inevitable showdown between himself and Piccolo.

We've mentioned previously when covering Dragon Ball that its martial arts tournaments are a near-perfect distillation of everything that the series does well in terms of action, character development and a well-placed sprinkling of humour - this remains the case in these final episodes, as a rather predictable bout of training (admittedly spruced up in that department by a spot of time travel) and working to resurrect those lost in previous battles is followed by the meat in the sandwich of the tournament itself. This particular tournament is certainly a great slice of everything you look to this series for and offers a perfect finale to the show with one final grand battle - or at least it would if that was the finale, but unfortunately the show decides to end on a note which causes it to fizzle out rather than end with a bang.

That slightly disappointing ending aside, everything is present, correct and as you'd expect it here in terms of both entertainment value and from a technical perspective - the action and comedy in the series is as fun to watch as ever, the show looks and sounds as good as you could expect considering its age, and both of its available subtitle tracks (representing the English and Japanese versions of the script) are rock solid. It may not boast the remastered glory of Dragon Ball Z, but to some we would imagine that's a bonus in itself.

Now that it's come to an end, watching Dragon Ball has proved to be a fascinating experience as a view into the genesis of what was to come with Dragon Ball Z - here is a series that initially struggled to find its feet and sense of rhythm, but ultimately settled into consistently providing entertaining fare almost without exception. It might have taken an eternity for the original Dragon Ball anime to reach the UK, but whether you're an existing fan of the franchise or not it seems fair to say that it was worth the wait.

7
It ends with a whimper rather than a bang, but there's still plenty of opportunities to enjoy Dragon Ball at its best here.
LATEST REVIEWS