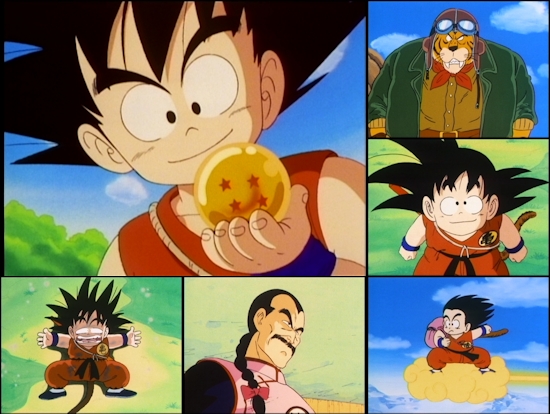 The UK's introduction to the saga that is Dragon Ball on DVD continues apace, as its third season delivers another bumper bundle of episodes in our direction.

Thus far, Goku's current quest has very much focused around his hunt for a singular Dragon Ball, that being the four-star Dragon Ball inherited from his late grandfather, with the discovery of other Dragon Balls proving to be only of passing interest (to our protagonist, at least). All of this is about to change however, as once again the Red Ribbon Army put themselves in Goku's way, courtesy of first Captain Yellow followed by a mercenary who goes by the name of Tao.

It's this latter individual who leads to Goku redoubling his efforts to collect all seven Dragon Balls, as the collateral damage of his adventures hit home in striking fashion. With a need to collect these items to use the wish that they will grant to him and a new friend of his, it's time for Goku to hone and improve his current skills before going to war with the Red Ribbon Army and taking on some bizarre challengers in a fighting tournament organised by a fortune teller in the name of achieving his goal. With that done, this third collection of episodes finds some time to meander through a few more adventures as Goku seeks to strengthen himself further for the future to make full use of his latent talents.

Having broadly enjoyed its early episodes, I found Dragon Ball's second season to be a less satisfying viewing experience, featuring antagonists and story arcs that outstayed their welcome which in turn tended to disrupt the blend of action and comedy which the Dragon Ball franchise as a whole usually nails quite succinctly. Thankfully, couched in these terms season three of the show is a return to form - yes, I still get rather tired of its frequent reliance upon toilet humour to try and get laughs in decidedly unsubtle ways, but the sense of energy and fun has returned within these episodes as it moves swiftly through most of its subject matter and lends its focus to pivotal events with a much keener eye. The result is a batch of fun episodes that again cements why Dragon Ball is so beloved by many - its utterly goofy but it knows it, which is allows it to have plenty of fun with its characters and the crazy world in which they reside while providing some satisfying story-telling into the bargain.

Once again, video quality for this release is as good as you could hope for given the age of the source material - it doesn't match the remastered Dragon Ball Z sets in these terms, and although grainy and a little dirty it's a decent transfer nonetheless. Similarly, the English dub remains by far preferable to the mono Japanese audio track, and subtitle tracks are included that both replicate the English dub and provide a more accurate translation of the Japanese audio - in itself a fascinating insight into the differences between the presentations of the series in its two available languages.

One technical issue we do have to note here is a rather bizarre error where the second half of an episode is missing, and what's more in its place is the second half of another episode entirely that occurs later in the series! Thankfully this doesn't happen during a critical part of the story, but it's an odd mistake that really isn't acceptable and should have been picked up on prior to release.

After my personal disappointment in season two, this latest instalment certainly feels like a return to what I was hoping Dragon Ball would be - an entertaining, light-hearted romp with a simple formula that it utilises well. It still doesn't match the heights of Dragon Ball Z in my mind, but if you're a fan of the franchise as a whole this is just what the doctor ordered... or would be if anime was available on the NHS.

6
This third season is a return to form for Dragon Ball, as it succeeds in getting its blend of action, adventure and comedy just right.
COMMENT AND DISCUSS
blog comments powered by Disqus