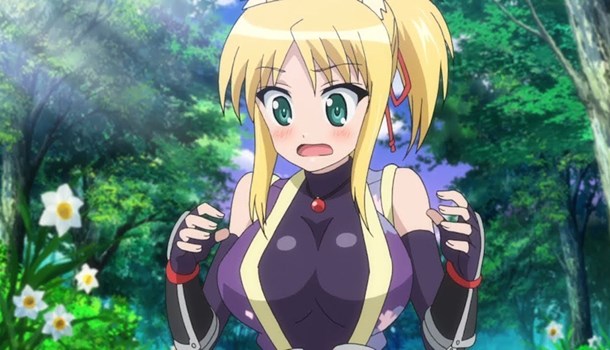 If an anime series could be described in terms of food, Dog Days would be best described as a sherbet gobstopper, dipped in honey and sitting in a pool of strawberry juice. It is so sweet, cute and saccharine, that even the countries and people are names after desserts! If Dog Days got any more sugar-coated I would need to take insulin tablets in order to sit though each glorious episode of ear twitching, tail wagging deliciousness.

Dog Days is set in the fantasy world of Flonyard, a magical continent residing in a parallel dimension to our own and only accessible through “summons” issued by the rulers of Flonyard. These summons are issued to individuals on Earth deemed worthy enough to be the Heroes in the epic wars which take place on Flonyard. Shinku, a young athletic semi-British chap, is chosen and dragged through the dimensional link, finding himself at the feet of Millefiori Biscotti, the pink haired princess of Biscotti, who just happened to be wagging her tail in delight of his arrival...

On behalf of the people of Biscotti, Shinku does his best to fight against the invading cat armies of Galette in the televised, non-lethal battle of the century. Series one ends with Shinku retuning home, saying goodbye to his friends in Flonyard, but thankfully, his departure is only temporary as when the summer vacation comes, Shinku, his friend Rebecca and his even more athletic sister Nanami are all invited to Flonyard to continue the non-lethal war where Shinku left off. This is where this second season begins.

As the three Earthlings arrive in Flonyard via the transportation method of glowing balls raining from the sky, they are split between Biscotti and Galette as hero representatives of each of the two warring nations with the exception of Rebecca, who is just a little bit special. As the spotlight is focused on the “fun” war that Biscotti and Galette are fighting, another power eyes the battlefield with envious magical eyes - the squirrel people of Pastillage want to play too, and Rebecca is their magical warrior of choice!

The first problem I have had with Dog Days, aside from the cavities in my teeth caused by the sheer sweetness of the characters, is that unfortunately series one was not available to view on Crunchyroll prior to series two (at the time of writing). Series one provides the viewer with the essential character introductions which are completely lacking (aside from a minor five minute recap) in the second series. How would anyone know without watching the first series that Milliefiori is a rather awesome pop star in addition to being the princess, that Leo has a very adorable cute side or that Éclair has a rather obvious thing for Shinku? However, this oversight is not the fault of the series' producers but rather with the distributor, and should be corrected soon as Crunchyroll plans to add the first season of Dog Days to their line-up at the earliest opportunity.

The second problem with this new season of Dog Days is the pacing. In three episodes of the second season, other than there being quite an epic battle and the reunion, nothing really happens. The same issue occurred in the first series, though it didn't drag quite as badly as the second season has so far. It may indeed pain me to say this, but the first series has the edge so far just in terms of story and its capability for stopping me from getting bored, though I hope to be proved wrong in the long run. As much as I absolutely love cute girls with animal ears and tails, there does need to be some substance. Too much sugar will rot your mind after all.

For those amongst you who are looking to indulge in the candy floss world of Flonyard, I would completely recommend waiting for the first series to make itself available and start at the beginning rather than diving in at what is a rather forced mid-point between series one and two. If you are already familiar with Dog Days through the first series and want to know what the second series brings, well, think magical girls with extremely suggestive transformation sequences and you won't be far wrong. Whether the second series has even half the substance of the first, we shall have to see. I only hope that it does pick up story-wise; as much as I love the characters, I can see myself getting bored rather quickly.

Now, I should really go brush my teeth; they feel rather furry after all that...

6
Extremely cute, but needs some substance to go with the sugary sweetness.