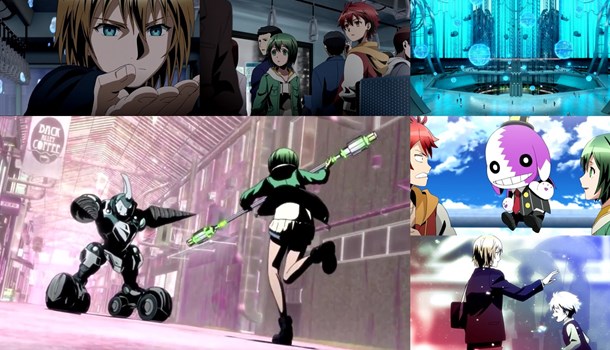 The first episode of Divine Gate opens quite promisingly – the art style stands out, which thanks to thick black shadows and a Final Fantasy-esque setting of a futuristic Tokyo sets expectations high. We first see Aoto and hear him narrate a poem. This instantly sets the mood for Aoto being a troubled teen, who unfortunately lives up to that stereotype all too well.

As Aoto gets on a tram, a man who controls fire starts attacking other passengers. As he targets a young schoolgirl from the crowd, the attacker conveniently goes on an expository rant about the Divine Gate: when the Divine Gate opened, it merged the living world, the underworld, and the heavens together, gifting people with six abilities. Anyone able to use those abilities (known as ‘Adapters’), is ‘called’ by the Divine Gate, where apparently all wishes come true. As this caused a lot of chaos, a World Council is formed and peace is restored. Over time, the Divine Gate becomes an urban legend and many people don’t believe in it anymore – even despite the quite obvious fact there are Adapters with supernatural powers.

After the attacker finishes his rant, Aoto finally decides to step in. Revealed to also be an Adapter, Aoto defeats the man, attracting the attention of Akane and Midori, two other Adapters coincidentally also on the tram. When they discover Aoto to be one of their ilk, they try to convince him to join an academy (simply named ‘Academy’) they attend where Adapters get trained.

But then, only a few minutes into the series, it all goes belly-up. It seems the series tries to tackle as many topics as possible; overly gloomy characters, an academy led by mysterious characters full of suggested alternative motives, personal struggles, a bit of slice of life, fighting, school life, superpowers – and all the time viewers are kept in the dark about the Divine Gate itself. Combined with trying to cram in as many woeful character backstories as possible, the series quickly becomes a huge mess. With its incompetent attempt to fit all these themes and multiple storylines together, describing the plot as mediocre would still be too generous.

Yet, the clumsy storyline isn’t even the biggest obstacle of Divine Gate – as many fervent anime fans know, sometimes a plot doesn’t become entirely clear after a few episodes, which isn’t necessarily a bad thing and sometimes even greatly enhances a series. No, the real issue here is the overly predictable, emotionally unstable characters.

Three episodes in, it isn’t overly clear who the main character is – the series starts by focusing on Aoto, but in episode two and three his most likely friends-to-be Akane and Midori occupy more than enough airtime for their tragic backstories. Midori’s story is downright laughable (her BFF appeared to have gone on a suicide mission in order to be Midori’s one and only friend), but even more pathetic and psychotic is Aoto’s story – the poor lad can’t eat warm food because he has such a cold heart. Aoto often talks out loud to a vision of his younger self only he can see, something you'd expect to raise questions with the people surrounding him, but not in Aoto's case. Oh, and he killed his parents. Whilst everyone is quite okay with Aoto killing his parents, Akane is the only one who is personally insulted by Aoto’s slight slip-up, because Akane’s dad is dead. If Akane’s dad was still alive, he would probably also be semi-okay with Aoto having killed his parents.

Undine, a bland character who gets assigned by the Academy to be Aoto’s adviser, gets introduced too, but besides being present in some scenes doesn’t do anything worth mentioning (yet). Then there is a strange creature probably best described as a floating dog-like thing with a hat on, called Metabon. He is seen hanging around Akane at times and annoyingly ends all his sentences with “-bon”. With no backstory whatsoever and no clear role in the series besides randomly popping up with Akane babbling away, this is another character that is easily dismissed and gladly forgotten.

Other characters who are way more interesting but unfortunately haven’t really gotten any spotlight or backstory (yet), are members of the academy. With names such as ‘Loki’, ‘Lancelot’ and even ‘Santa Clause’, I wanted to know more about them, but my curiosity wasn’t strong enough to sit through another episode of Divine Gate.

Looking at the characters, you may think they’ve stepped right out of a game, and you’d be absolutely right – Divine Gate is based on the mobile game of the same name. This explains the otherwise out of place character designs - for example the bright-red hair for the fire-user Akane and befitting blue mane for water-wielding Undine in a city where everyone else looks normal. As a mobile game, Divine Gate scored high – created by the same team responsible for the award-winning Puzzle & Dragons mobile game, nobody expected any less. As an anime however, this adaptation has received less than favourable ratings. Perhaps the anime series is fun for fans of the mobile game, although I can’t see the overly stereotypical characters and boring storyline enhancing any gaming experience.

The only good thing I could discover about Divine Gate is the artwork – the fighting scenes are detailed and pleasant to look at. Perhaps I’d be better off playing the game if I was solely interested in the artwork, however I don’t think I can stomach any more after sitting through the disastrous first three episodes of the series. Most likely meant to promote their game above all else, Divine Gate fails on all levels, enough so that I’m not keen on finding out if the series redeems itself further on.

You can currently watch Divine Gate in streaming form on Crunchyroll.