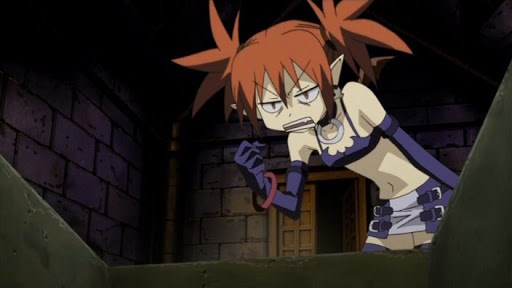 I find it ironic that as I write this, my poor PSP is sat there, with Disgaea inside it, and I am unable to play the game which I have become oddly fixated upon. It’s also a little embarrassing that it has been four months since I last reviewed the series and i have yet to get past where I have reviewed up to. Ah well...

So, the first thing to say about the series is that the comedy angle which has been present since the beginning is still around and in force with the main focus being on slapstick. Unfortunately, it’s also beginning to wear a bit thin in places. In fact, things are actually getting a bit samey. The character dynamics seem to be utterly static and predictable now the episodes have progressed, which is something I am finding does not occur in the game as much. Perhaps it is just me being picky. I will admit that the dialogue is still highly amusing though and that the denseness of Flonne really does crack me up inside. (I am absolutely positive I have met people like her in real life before.)

The series progresses with Laharl attempting to claim the Overlord of the Underworld title by defeating various major characters (bosses) each of whom have a nefarious scheme, usually involving sharks, to defeat Laharl. In true party fashion on which the series is based, the background characters, Etna and Flonne keep to their well defined roles as the comic relief and moral support. It’s all very special really.

So, what actually happens during this volume? Well, I am not exactly sure, to be completely honest. I clearly remember a large shark tank, demon slayers, a Prinny revolution (failed), sexual innuendo involving a young child and a demonic board game. A lot of things happen, not a lot of it makes any sense, but for the most part you just let all these semi-random events flow over you with a smile on your face. The kind of smile you see a trench coated man wearing in a taxi opposite a primary school.

Unlike the first volume, I have finally given into watching the English dub for this disc. I take back my earlier comments - It's honestly not as bad as I made it out to be, especially when it comes to the airheaded angel Flonne. Frankly her voice is perfectly cast and the actress sounds awfully similar to Reese Witherspoon.

My past advice was to disengage your brain, grab something alcoholic and accompany with sugary snacks. This advice stands. It’s very enjoyable, as long as you don’t think too much and just enjoy it. If you want a story that makes proper sense with the same characters, then play the game. Simples.