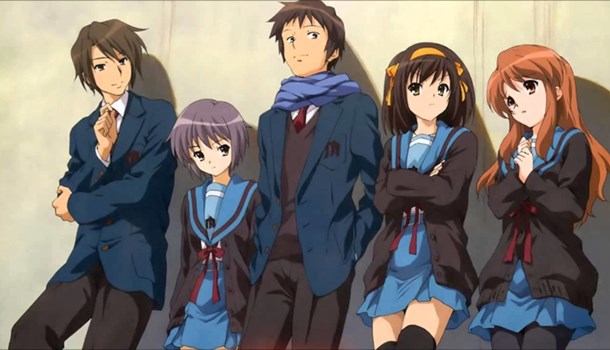 Disappearance of Haruhi Suzumiya, The (DVD)

When I was handed this DVD to review, I was told by our lovely Mr. Andy Hanley (who has previously covered this work both in light novel and cinema screening formats) that I was now all but the de-facto "Haruhi reviewer" for UK Anime.  I have to admit, the distinction did give me warm fuzzy feelings. Sentimentality aside, how does this movie fare in the transition from light novel to DVD?

Even before I get into the plot of The Disappearance of Haruhi Suzumiya, I have to wave a big red frag in front of anyone reading this who is not already well familiar with the Haruhi franchise. This isn't for you. Sure, you will probably still appreciate the majority of the film, but the plot heavily leans on a number of key events that have previously occurred in other stories involving Haruhi Suzumiya that the movie chooses not to recap. Without knowledge of these prior events a lot of the tension will be non-existent and some key moments of the film will leave you muttering "so what?" For veterans such as myself, the lack of flashback or catch-up is very welcome indeed as it ensures that the pace of the film is not dragged down by re-iterating things that are already well known.

So what is this crazy plot that requires so much prior knowledge to appreciate? Well, snarky inner-monologuing protagonist Kyon (real name unknown) and the rag-tag band of crazies in the SOS Brigade are planning a Christmas party, instigated by brigade leader Haruhi Suzumiya. Party preparations are ramping up nicely when Kyon wakes up one morning to find the entire world has changed around him. Both Haruhi and the SOS Brigade no longer exist and, even worse, no-one remembers either and its members themselves have no recollection of Kyon or their previous misadventures. Distraught and bewildered, Kyon goes on a trek to find out what on Earth happened and to figure out how he can fix everything back to how it was before; and if he should in fact even do so.

I'm not going to lie - this film is surprisingly long, clocking in at around two and a half hours from start to post-credits stinger. While this runtime is somewhat shocking, the real surprise is that it manages to fill the time capably, adopting a slow pace to proceedings while still unfolding events at a very reasonable clip. While admittedly the pace does break down slightly in the second half as the amount of mysteries decrease and plot threads start to take their sweet time wrapping up, the film never leaves the viewer hanging waiting for anything to happen as there is always something actively unfolding on the screen. The almost omni-present inner monologue of our protagonist Kyon really helps a lot here, as it means that even the quieter moments can be passed with some idle banter from our suffering main character. Despite the slight breakdown of pace towards the end, the film is a very satisfying complete package in a way that is slightly hard to define - everything is nicely wrapped up and resolved at the end in a way that feels cathartic in its completeness.

While this may sound cruel, Kyon's suffering is really a key element to the film - after a lot of the previous stories where we got to know Kyon as a snarky on-looker while the other, crazier cast members did outlandish things like travel through time, fight giants made of light, or craft magical baseball bats, this film throws Kyon in at the deep end and makes him the primary victim and focus of the events that are unfolding. This transition from bystander to active participant uses the rapport that viewers have developed with him from previous media (or even from just the introduction of the film) to great effect, drawing you in to things wonderfully. Much like the pace of events presented, the inner monologue starts to break down towards the end of the film as it begins to feel over-used and verbose.

Kyon's suffering is further underlined by the presentation of Disappearance - while admittedly the film is not very action-packed and contains zero explosions, there is a well realised artistry and impact to the audio and visuals that kept me smiling throughout the film. Shots are composed with a careful eye for highlighting characters and their surroundings in particular ways, enriching events by actually showing things rather than having characters blurt out additional lines. Extras are dotted around the scenes where appropriate and carefully animated with their own actions to make locations feel much more lively. School corridors have small groups of chatting students and pedestrians wait at crossings, making the world inside the film feel much more alive and real. The film makes clever use of shifting colour palettes and dutch angles to draw you in, the camera shifting around effortlessly to help you take in the full scene instead of just a singular event, particulaly in the more unsettling scenes. The characters and their surroundings are lavishly animated and very lively - even simple acts such as taking the top off of a white-board marker and writing on the board are enriched by having the whiteboard shift with the weight of the person writing on it. The backgrounds have an equal amount of effort poured into them, even when it is apparent that they are not usually going to be seen- shots looking out of school classroom windows have the entire, carefully detailed town laid out behind them, going on until the horizon.
The soundtrack is equally masterfully presented, combining existing themes from the TV show, some lovely orchestral pieces, and more than a few piano pieces by Erik Satie, who I am a big fan of and whose moody compositions fit the events on show to a T. The film also knows how to use silence well, lending a cutting edge to some of the more dramatic moments and giving the speech and sound effects space to expand into. This careful use of both art and sound really elevates the film to a higher level - you feel like you are watching something special, a product of endless love and care that knows what is doing.

Now for the more down-to-earth stuff: the release itself. While this is a boring thing to bring up, the subtitles on this release are a cut above your average DVD in that they don't look horrifyingly ugly. The font size is a little smaller than usual but they are crisp on the screen and easy to follow even when you have two parallel conversations going on at the same time. The video quality is also very nice when in motion, the limits of the DVD format only becoming apparent when you pause and the picture appears pixellated. Another thing to note from the DVD is the dub. Kyon's voice actor, Crispin Freeman, delivers a great performance while the rest of the cast are somewhat of a mixed bag, particularly for the female characters. The dub script hampers the performances as it sounds a little too literal in its translation, and feels as if it is one editing pass off of sounding natural.
The release also comes with a second disc of extras, the majority of which are a mixture of various behind-the scenes features and film trailers. In this case,the behind the scenes items that focus on the creation and editing of the film and its music are well worth a look as they are very candid and informative, if such things interest you.

The Disappearance of Haruhi Suzumiya feels like the best kind of fan service - a lavish, well put together and smart adaptation of perhaps one of the best stories that has come out of the franchise, given the running time and budget necessary to fully realise the tale. While the pace does suffer a little in the second half, setting aside the two and a half half hours for this film will not feel like time wasted, especially if you have a generous glass of your favorite beverage to hand. For Haruhi fans, this is a must have. For the un-initiated, this is a great reason to get started.

This release contains two DVDs, with the film presented on disc one and extras on disc two. The film comes in 5.1 audio for both English and Japanese languages, with English subtitles.

The extras disc contains: Trailers, commercials, teasers and music video for the movie, behind the scenes looks at the background music recording and the cutting/editing process for the film, a short doccumentary on location scouting and a stage greetings/press conference event in Tokyo with the cast and creators. Also present are trailers for other Manga Entertainment movie releases.

9
A wonderful, lavish adaptation that takes an already enjoyable story and makes it even better - a must for any fans of Haruhi.
LATEST REVIEWS