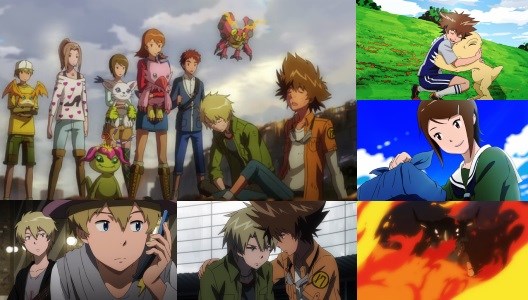 Note: In deference to nostalgia all characters will be referred to by their English names for the purposes of this review

Back in the early 2000s there came a divde amongst young people (who were unwittingly watching anime) - you were either a Pokémon person or a Digimon person. Liking the games that originated the franchises was irrelevant - it was the TV shows that were the point of contention. Did you go for Pikachu bumbling around in a never-ending search for badges? Or Augumon, who was a dinosaur who turned into a sucession of other dinosaurs? The choice was obvious for many of us and Digimon remains a classic little show (albeit one very stretched out, with the first series alone running to 54 episodes) with fun characters, great battles and things that transformed in every episode. Anyway, Digimon was even worked on by Mamoru Hasoda so Pokémon loses for that reason alone. As each series changed everything from story to cast to location (the third season changed everything entirely) things didn't quite retain their past glory however, and past the third season little has ever really drawn me back to Digimon.....until now, as 2015's Digimon Tri movies hit the UK.

Some time has passed since the last time we saw Tai and the original Digidestined, and the gang have all passed into high school - separated from their Digimon pals as life has moved on. Matt's joined a band, Joe is studying furiously for entrance exams and Mimi has gone to America. The delicate balance is due to be upset however as large black portals begin to open, breaking down the barrier between our world and the digital one, allowing Digimon to break through causing massive damage to the real world. Its not too long therefore before Tai and the gang will need to return to action as Augumon and the others return to their side to assist them.

Its great to see the original team back together again here, and even better there's a wonderful little easter egg in the opening moments which sees the four new Digidestined introduced in season two having just had their rear-ends whipped (though likely not dead - this is Digimon after all) in a non-too subtle nod to the fact that the originals were always the best and no-one's going to be stealing the spotlight from them here.

The film does a really good job of picking up where the series left off and still progressing the characters - the new character designs all reflect that the cast are older, have adopted new styles and fashion sense (though the series still fabricates a reason to give Tai his goggles back), and even the voice cast manage a near-identical performance for the dub which is impressive given how long its been since the original series (though it is odd that none of the male character's voices have broken even though some of them are 17-18 now). The creative team have done a really admirable job in terms of the series visuals managing to make good use of contempoary animation while still retaining the charm and style of the original run. This first film looks brilliant and the animation really shows off the budget and attention paid to it. The action is as over-the-top and bananas as you want it to be too, backed up by an equally brilliant soundtrack, though those hoping to hear the original series' US theme song will be disapointed.

At the same time, there are unfortunately some issues here. Whilst the characters are everything you remember them being, this also includes Matt and Tai being the dullest of all of them - in particular, the film's big character sub-plot of the two of them fighting about Tai being unwilling to commit due to the amount of collateral damage being caused is very tedious. It also means that the film sidelines a lot of the other characters for the big finale, because of course those two are the only ones who can stop the big threat (whilst all the others conveniently forget about all the things they could have been doing to resolve matters whilst those two were still whining at each other). Theres also been some... interesting choices made in the character department, as frankly the two might as well just go behind the bike sheds and get it over with given the way they act together (then again it was recently revealed that one of the original series episodes was actually a romantic love triangle between Tai, his sister and Augumon so who knows where this series is going to take things).

The Digivolving scenes are bigger, longer and more bombastic than they've ever been here, but at the same time they never quite have that impact they need to make an audience really feel excited about whats going on. It feels like this is partially do do with the fact that the Tri film series was originally supposed to be another TV series but was re-worked into theatrical films later on. Annoyingly they don't seem to have done more than smush the scripts together as its very clear where the breaks between the episodes would have been and you can't help but feel it would have worked far better as a series on the small screen, particularly given that absolutely nothing is resolved by the end of the film and they don't even manage to come up with any kind of hook or cliffhanger to keep you guessing.

This is admittedly partially my nostalgia talking but I did like Digimon Adventure Tri, and I'm looking forward to seeing the next film to see where things go and to watch Gatomon continue to be awesome (the best Digimon is a cat, who'd have guessed?)

In terms of the release itself its harder to reccomend - there are six of these films coming and given the lack of any resolution or hook at the end of this one (and no UK date for film two at all yet - film five hits Japan later this year) it's going to be quite a trek before you'll ever find out how it all ends.This may only be worth picking up if you're a huge Digimon fan, otherwise you may want to wait till you can get to watch all of them at the same time.

English and Japanese stereo, English 5.1 audio with English subtitles. Extras consist of featurette on the Hollywood premiere and interviews with the English cast.

7
The gang's all back, and things are looking up.