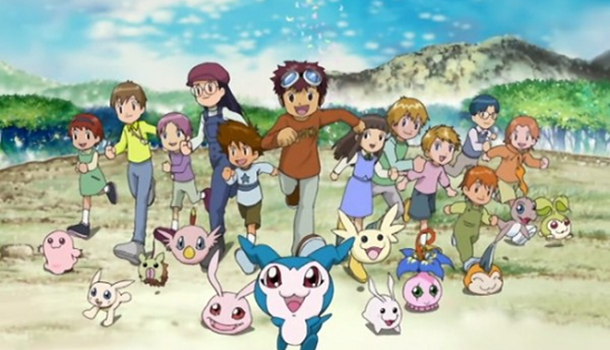 When we last looked at Digimon: Digital Monsters I spoke of the difficulties the Digimon franchise has experienced in being eclipsed by the veritable celestial mass that is Pokémon. Season One of Digimon: Digital Monsters was in the shadow of the towering stacks of 'Unofficial Pokémon Go Guides' at W H Smith... but the thing is, when I was passing by W H Smith earlier this week those towering stacks of 'Unofficial Pokémon Go Guides' were still there, unsold.  As Pokémon recedes from the headlines, space has opened up again for other franchises to fill. That stack of guides hasn't moved for a long time - it's safe for Digimon to emerge from its shadow into the light of a new dawn, as indeed season two of Digimon: Digital Monsters is doing. Does it have the energy to knock down that mound of merchandise and give it room to make a run-up to Christmas?

Three years have passed since Tai and his friends saved the Digital World from Apocalymon. Although they all fondly remember their amazing adventure with their Digimon companions, both time and themselves have moved on and the needs of hobbies and high school from Matt's band to Tai's football team have taken over. The Digital World hasn't forgotten them though, and unexpectedly portals that were thought to be closed forever start opening up once more. The youngest of the original crew, T.K. and Kari, stayed behind in elementary when the others moved up to high school and so they have the opportunity to lead a new group of friends into the weird wonderland of the Digiverse - but now the Digital World is no longer their own secret garden and other kids are turning up there too... not all of them with good intentions. A Digital Emperor is dominating the Digital World, shackling Digimon with his Black Rings and turning them into his brainwashed slaves. It'll take the powers of all the DigiDestined, new and old alike, to defeat the evil emperor and restore freedom to the Digiverse - can the first DigiDestined pass on their skills and knowledge to help the new generation rise to the challenge?

The presentation of this edition of Digimon: Digital Monsters  is very much 'second verse, same as the first'. All of the comments I made in my review of Season One last month still apply here with no changes. It is once again a direct-to-disc re-run of Saban's English-language cut of the Digimon Adventure Zero Two anime. I don't consider this to be a bad thing - however commenters on Internet forums who are trying to fit in with the senior members might whinge that it's 'inauthentic', it is still the version that we grew up with and so it has the most resonance for nostalgia. Once again there are no subtitles nor any Japanese audio - but as there are considerable differences between the English cut and the Japanese original not only in terms of an altered script but some censored cuts for what is still a kid's show (for instance, Japanese scenes where the Digital Emperor whipped unruly Digimon to obedience have all been excised), it'd be very difficult to include the Japanese anyway. The adaptation also remains very cheap and minimal - while the first season of Digimon: Digital Monsters doggedly insisted that the kids lived in San Francisco it falls apart completely in Season Two with no attempt to draw over the Japanese signposts that are plain as day as early as the very first episode - it's as ill-fitting as the Ace Attorney games trying to force everyone to eat hamburgers. It's not that big of a deal - it amused me more than anything else - but I wonder if younger viewers might be put off by the unknown scribbles. Talking about images though the picture quality continues to be scrappy, legible but with visible and recurrent errors - I even noticed interlacing flicker at some points which suggests a poor mastering. The original production of the anime is also still embarrassingly cheap - even if you're a grown-up with no investment or interest in Digimon putting this anime on could make for an entertaining party drinking game picking up all of the animation errors.

As untidy as the presentation is Digimon: Digital Monsters Season 2 does clean up well in its storyline. It can be more thoughtful - the resolution of the Digital Emperor's storyline does involve death in the family - people aren't being killed on-screen, but the loss of a relative is something we all have to experience and the regrets it brings are treated senstitvely and worth discussing with your kids. Also, the introduction of a second generation of characters has far more significance than introducing a new toy line, and it's something that Digimon really does do substantially better than Pokémon. Change feels faster and more pronounced when you're growing and you'll be familiar with children who even at a younger age are still embarrassed by "kiddie stuff" from as little as a year ago; Digimon harnesses that genuine feeling without aggravating it and speaks directly and informatively to a younger audience about how to manage it. Pokémon's hero Ash Ketchum is perpetually ten years old and so his audience is a generational rotation of brief, passing interest as new players come in as kids and progress out as teenagers who feel a bit too old for his tweeny antics - and while adult anime lovers know there's no harm in watching a kid's show it takes the distance of long years for it to re-enter that perspective. Season Two of Digimon: Digital Monsters by aging the original cast can both attract a new audience and retain the previous audience who feel more in line with the old guard.

This is not only the transition from elementary to high school, for as the series goes on the characters even age into adulthood - but whereas in most stories growing up means leaving behind the play of youth, in Digimon the young and old alike are together in their electronic Narnia. There's a quote from CS Lewis that feels relevant: "When I was ten, I read fairy tales in secret and would have been ashamed if I had been found doing so. Now that I am fifty I read them openly. When I became a man I put away childish things, including the fear of childishness and the desire to be very grown up". Now this has become cliché and threadbare as it gets bandied around the internet far too much, mainly as a defence mechanism by self-conscious geeks who hope a literary shield can deflect scorn of our vulgar low pleasures, but it does have a specific application here. It reminds kids that it's okay to be young, and not to rush into adulthood - there's time enough to enjoy things and they won't fade away with age; and it tells adults  to understand that roots are a valuable foundation and the basis for achievement but you still should build something more on top of them - still be involved with younger memories but make new ones outside them too.

The messages that bring families together may seem obvious ones but they're too often forgotten. Digimon: Digital Monsters is a quickly dashed-off budget re-release but I can forgive its technical faults as it reminds us of something that's worth remembering.

English-language audio only with no subtitles. Extras include the original Japanese-language opening sequence.

7
An improvement over the first season - still a very basic presentation but with a more substantial story that resonates with the whole family.