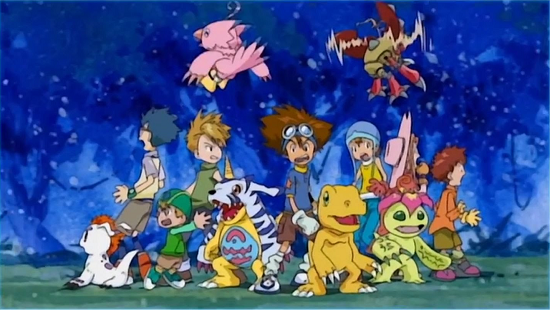 Like every sprog who left primary school in the class of '98 I was in the perfect position to be swept up in the late-Nineties Pokémon craze, but I never got into Digimon. Whereas the Pokémon cartoon was on every day after school on Sky One I could never find Digimon on TV, and I was never all that much interested in looking for it. I saw a poster for Digimon the Movie in the small Savoy Cinema where I lived and I remember rolling my eyes dismissively at it. Poké-mon, Digi-mon, it was even ripping off the name! Back then Digimon always came across to me as the knock-off also-ran trailing along behind, the Gobots to the Transformers, and why bother with the cheap imitation when you could have the real premium experience?

With the roar of a thousand clattering keyboards I'm sure that there are a lot of emails to me being drafted right this second, many invoking the "pathos" of Matt's parents' divorce, so let me stop you all and say yes, I know. I know now of course that while it did inescapably come later in Japan Digimon was still the first to make landfall in the West, that Digimon did develop separately from Pokémon as an extension of the Tamagotchi, and that the Digital Monsters of this anime behave very differently to the Pocket Monsters of Ash Ketchum & Co. The point is though that while I know all of that as a 30 year-old now, I didn't know it as a 12 year-old then; and despite more than 15 years having passed since then, I doubt that the situation is any different for the kids of the post-millenial generation growing up today. Pokémon remains a irrepressible multimedia  juggernaut  to this day (my local W H Smith is packed to the rafters with "Unofficial Pokémon Go Guides") but Digimon has been a much quieter franchise which is chugging along steadily in Japan but in the West has had multiple long fallow periods for interest to die off and need rebuilding from - for instance only two Digimon videogames were released in North America at either end of 2008-2014, whereas in the same period Pokémon brought seven mainline titles to America and Europe together, and that's before you even start counting the spinoffs.

This leads me to wonder about the purpose of this DVD re-release of the first season of the Digimon Adventure anime series, also known as Digimon: Digital Monsters in the English-speaking world. Is it meant to be a nostalgic trip for grown-ups who enjoyed it as children back in the day, a way to re-energise the franchise with a new generation of modern kids, or something to fill a gap in the collections of otaku? Can it be all, or will it be none? Will it Digivolve for a new audience or is it Digidestined to be an irrelevance?

Snow in July is only the first hint of the topsy-turvy summer of wild adventure and strange surprises that seven young friends Tai, Sora, Matt, Izzy, Mimi, T.K. and Joe are about to experience. Their summer camp is buried under a very unseasonal blizzard - and while it's the first taste of a climate calamity enveloping the Earth with droughts and floods the world over, the kids in their innocence only see it as a happy opportunity to go tobogganing instead of canoeing. None of them packed warm clothing for their trip but they won't have the time to remember to start shivering because a wild wave sweeps them away to a weird new world - the Digital World, a land of colourful jungles, curious creatures and frightening monsters! Protected by the loyalty and friendliness of the Digimon that live in this new world, though, Tai and his friends set about exploring the Digital World, but while it might seem to be a fantastic and completely alien place compared to the Real World, the two are nonetheless closely linked and the gang is about to embark on a crazy adventure to save both their families and their new friends.

Of the questions that closed out the introduction before the synopsis, one I can answer straight away - this is definitely not a release that will please an otaku! Beyond showing the original opening and closing animation on disc 8 (the only extras provided in the entire set) there is absolutely nothing of the Japanese anime in this release. It's entirely a straight rip of the original 1999 English-language U.S. television edited version, complete with Saban ident at the end of each episode. If anything, "straight rip" may be a very literal statement. I wouldn't be surprised if a Manga Entertainment employee just  came down from the loft with his old tape recordings of the show and burned a transfer onto these discs - not only is there no Japanese language track but there aren't even any subtitles for the English version either (a sure sign of a quickly dashed-off mastering); each episode begins with an American "TV-Y7" age guidance badge in the corner of the screen; and more to the point the image quality is poor as well. Digimon: Digital Monsters does not look good stretched out onto a large modern television - aliasing, grain, blur and chroma errors are all immediately apparent. It's all legible and watchable, but it is untidy and definitely not for someone who makes a point of Blu-Ray clarity. Adults who want to polish and burnish their childhood memories with a loving and exacting restoration are going to be disappointed - the content you enjoyed back then is still there, but there's two decades of dust laid over it.

How does Digimon: Digital Monsters hold up for children, then? Digimon was a much more cheaply-made show than Pokémon  (I'm sorry, but the comparison has to be made)  - even in the final battle at the end of the series, when you'd expect them to pull out the stops for the dramatic climax, there's a lot of cut corners like showing someone flying by moving a still frame up and down the screen like a drag-and-drop picture on a Paint program. Cartoons have come on a long way since I was young; the primitive CG used for the Digivolve sequences may be charmingly retro for a grown-up but would a kid today with so many other options to choose from might call it lame. The theme title is also just tuneless noise and definitely not something you can sing along to, and background music throughout the show is almost incessant - it's nice that kids are being exposed to orchestral music but it seems frightened that their attention might wander if there's so much of a second of silence.

Nonetheless, at the core of the show Digimon does still have its heart. While the battles are a lot cruder and cheaply-made they do have more stakes to them because whereas the Pokémon only ever got cartoony sizzle-marks in their show Digimon in contrast can be 'killed', getting disintegrated and reverted to an egg state; this gives battles some danger without being too nasty or mean-spirited over it. The script adaptation is decent with plenty of suitable jokes (talking tree Cherrymon's topiary puns stand out to me) and the life lessons the children learn over the course of the series are valid and worthwhile ones;  that aren't just told in pat sermons by authority figures but they have to figure out and struggle for themselves - and Digimon believes that kids do have the moral courage and reasoned nous to work them out too - Digimon is a lot less patronising than many other shows, old and new, for the younger age bracket and I'm confident that young viewers would respond to that.

If you're the sort of person who got his knickers in a twist over the bowdlerisation of One Piece by 4Kids then you'll have a fit over Digimon: Digital Monsters, and if you grew up with Digimon and are looking to explore the universe further beyond what you had back then an exact rerun of the TV show has no value at all; as adults this only appeals to very determined nostalgics. However, if you need a time-filler then it's worth considering if money is tight. Digimon: Digital Monsters costs £29.99 for 54 episodes whereas many modern anime releases charge the same for a 12 or 13-episode single-cour series, so you are getting a lot of bang for your buck in terms of sheer volume of content and that will help it go farther in terms of value-for-money, but the quality is less than the quantity.

English language audio only. Extras include clean opening and closing sequences from the original Japanese version.

5
This no-frills budget re-release will be good for kids, but adult fans may feel short-changed.