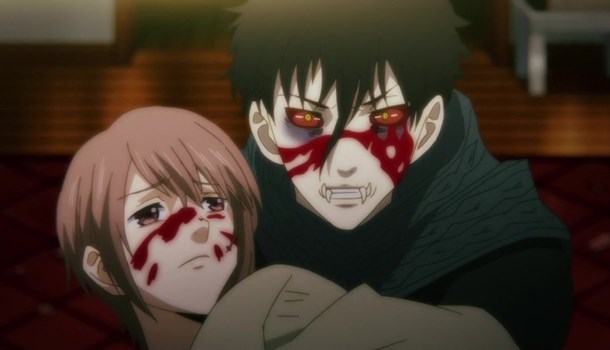 Devils’ Line, one of MVM’s first 2020 releases popped into my Blu-ray player at a time when I needed some entertainment, preferably not mindless, with some intelligence but perhaps not with too much brain required. Also, being partial to the odd vampire - not in real life mind, the teeth marks raise all manner of questions at work –added to the allure of giving the show a whirl. Though I couldn’t remember seeing a good vampire, well anything: book, film, series, in a while I nevertheless continued with despite my usual dull-witted pessimism and lived in hope.

You have to say that Tsukasa Taira is pretty unlucky to discover that her childhood friend is not only a vampire but one who is also the unknown mass murderer on the news. Talk about bad life choices. But that’s OK, because she’s saved from his murderous attentions, and her friend is put out of his bloodlust murder spree misery by Anzai. Only Anzai is also a vampire (half-human as we’ll discover), part of a crack team who investigate vampire crimes. Tsukasa’s life choices improving none too much as she realises she’s falling for Anzai…

Devils’ Line doesn’t break the trend of average vampire stories overmuch but it’s at least solid. The problem trying to review Devil's Line is that it would be very easy to damn it through faint praise. I wouldn’t approach a series expecting one that you believe is destined to become a classic, though one suspects it will have its adherents. Starting with the worst first: the central relationship between Anzai and Tsukasa is never particularly convincing, which is a shame because there are some nice aspects to it, such as how Tsukasa – just like Anzai – is plagued with genuine sexual feelings, and not just generically so – and in this the series is aimed towards adults. But it all just feels contrived, like they need a central relationship for the story and they’ve decided this is it. It is never given the chance to really develop naturally (maybe the manga upon which it is based gives it more build up?). The relationship also becomes a vehicle for investigating if Anzai can supress his desire for blood – unlike most vampires the ones we meet only desire blood when they smell it, come into contact with it and by burgeoning sexual urges, uh-oh, not good when you literally fancy the pants off some human girl! On a human and emotional level the series never quite clicks. And when your series really centres itself on two characters that are meant to mean the world to one another, this is a bit of a problem.

The series otherwise has a certain bloody visceral oomph to it. It’s not afraid to be bloody and show the vampires in their worst low down and dirty bloodsucking state. Though I was not particular convinced by our vampires when they turn into bloodsuckers: their design, their jaws distending to the point when they can barely talk has a point to it, it emphasises their animal nature, their lack of humanity when mindlessly desiring blood but it felt a bit too unsubtle and if anything their teeth seemed so far back in their jaws I kept thinking: so how with teeth like that would you even be able to drink blood? It broke my suspension of disbelief without ever intending to. In a way it’s in keeping with the overall aesthetic and though I don’t necessarily want my vampires svelte I do want them to be physiologically believable.

Then there is the story, a labyrinthine plot of covert government agencies and characters all plotting together, many and most against our protagonist’s beleaguered unit, to the point where I lost track of who was who, which unit was which and fighting for whom against whom and then many of the character designs were not distinctive enough to emphasise difference between blah and blah. Maybe this was an intentional design choice: Female Agent A and Female Agent B both have the same body type, the same longish dark hair, to suggest their connivances are really all one and the same. I really don’t know. Maybe a better storyteller would have made it all fall into place, like some of the stories way back when in GitS: Standalone Complex.

Again, there was potential in Anzai’s backstory though he has some contrived encounters when it comes to his half-human past. The story also explores the potential for human-vampire relations and in such a way that it is not just tacked on but also moves the main plot along. But again you’re stuck with the problem that if you cared more about Tsukasa and Anzai it would have more resonance, because it would point towards them having a sexually unfulfilling relationship in the future. Or any kind of relationship for that matter but as it’s hard to really believe in them as an honest relationship that resonance is lost. Also, as the series progresses, when the public learn about vampires, the story goes down paths dealing with mob violence, almost in the sense of moral panics taken to the point of blood on the streets. I felt that the studio was trying to edge in a little politics here, rather than just go with mindless mob violence but if so there was never enough to give the politics any bite. Or maybe I was just looking for something never really there?

More on the plus side, I did quite like the ending, if only because it didn’t make things all happy but managed to come to a conclusion that was more balanced between optimism and what is more realistic (in the context of their world). Also I felt that our protagonists developed over the 12 episodes, most especially Tsukasa. Then there’s the bonus, the OVA and I was pleased to find it wasn’t’ just comedy-bait but tried to gives us a glimpse of the future, with the hint of what could be told if the studio were greenlit with a second series. (Can’t see that happening personally.) Equally I liked the fact we were dealing with adults, Tsukasa is a university student not another in the endless line of teenage high-schoolers falling for someone unsuitable.

So for all my damning by faint praise I did quite enjoy Devil’s Line. As a: sit back and enjoy a bit of visceral bloody fun it’s fine but you suspect you could better use your time with a multitude of other series or films, vampires or otherwise. Or just (re-)read Dracula.  Though these vampires have little in common with Stoker’s creation.

Oh and one final thing: please, please, just because this is a series with blood and with vampires does not mean you need to have a generic metal song over the opening credits. I’ve nothing against metal (all hail mighty TOOL!) but it’s just so bloody obvious. (Pun, sadly, intended.)

6
Reasonable if uninspired entertainment. Some good ideas, some questionable execution though manages to be a bit more than the sum of its parts
LATEST REVIEWS