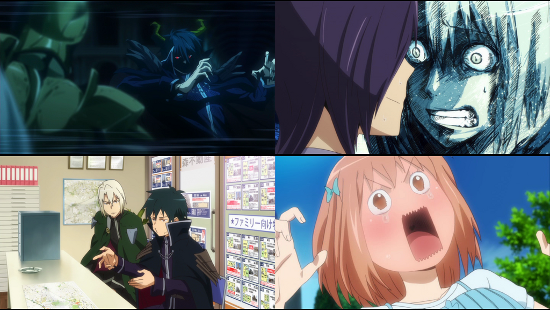 Devil is a Part-Timer, The

The Dark Lord Satan is on the ropes - after an initially successful invasion of the world of Ente Isla he has been pushed back to his castle, and is in danger of having his horned head separated from his body. Realising the battle is lost, Satan and one of his faithful lieutenants opens a magical gate and escapes to the nearest possible safe place. That place turns out to be modern day Tokyo, where Satan is mistaken for a lost cosplayer by the police. Pulling himself together, Satan pledges to rebuild his empire and starts on the very bottom rung - working part-time at “MgRonalds” flipping burgers. Unfortunately for him, others have followed him from Ente Isla, and are keen on finishing what they started...

The Devil is a Part-Timer makes a great initial impression, laying out its stall quickly and effectively in the first episode without needlessly dwelling on any of the things it very confidently puts in front of you. In fact, this confidence is a welcome hallmark of the first arc of the series with comedy, world building, drama and light romantic shenanigans brought to the screen with a clear focus and a great sense for when to drive things home and when to switch gears. The comedy in particular benefits greatly from this, with impeccable timing and a wonderful gamut of reactions and facial expressions making me bust up laughing frequently while watching. The momentum all this generates sweeps you along and makes the show an absolute pleasure to watch, holding your attention hostage utterly. But sadly, this does not last forever.

After a very, very strong first arc the series falters somewhat and cannot quite recapture the same magic for the second half. While still an entertaining watch with plenty of great jokes, the laser-like focus and pacing that made the first half so engrossing slackens somewhat. Episodes meander from character interactions to new conflicts and misunderstandings, on to a swimsuit episode, and then to a confrontation without a great deal of impetus to push you along. The events and plot threads don’t hang together as well, making things feel flabby and indistinct. There are more romance elements present, to the point that they feel like padding due to their sheer number. I want to reinforce that it is still a good show, all present and correct, but just not quite as good as its own previous standard.

The series also looks really good, in more ways than just in blunt visual spectacle. It’s full of little details that the animators have clearly taken care to spend time on, making the series feel more alive as a result. Cars driving past at night, shifting the lighting as they go; people moving in the background; stick-on sequins on an envelope. The fantasy and magical elements look great and have their own loose, if generic, aesthetic to them. All of this coupled with the great backgrounds and lively character art make the series really pop on your TV while watching. A rather hackneyed phrase that I feel the need to use is coming up here: it looks especially good for a DVD. Edges look a little fuzzy or indistinct if you are sat up close or have a massive TV but otherwise the series looks great. I admittedly do not have a copy of the Blu-ray available to compare against, but I certainly don’t feel like the show is unfairly impacted by the DVD format.

While the show itself is great overall though, it is badly let down by the release it is saddled with. It gives a good first impression with some nice, clean menus but what is contained behind those menus is, frankly, sloppy. The subtitles are poorly timed, at times obscure the action through daft placement, and whenever more than one conversation is on-going (which is quite frequently) it becomes impossible to untangle the threads as the subtitles are all the same colour, change placement on the screen and swiftly blip in and out of existence. In one case the show displays subtitles for an important text message on-screen for a matter of frames, making you pause through the show to read it. It really sucks both drama and comedy out of a scene when you have to watch it twice to piece together what people are saying! This is especially true of episode twelve, where the subtitles are a good few seconds ahead of the action in this climactic episode. Perhaps the Blu-ray is better in this regard (we didn't receive Blu-ray review discs in time for this review), which is something we may try to revisit in the near future.

Even more damning is the dub track. The English voice performances themselves are fine, but the audio mixing is utterly terrible. In order to accommodate the dub, the background music and sound effects have been noticeably turned down across the board, making the audio sound tinny and cheap. It is, quite honestly, unlistenable and when I discovered this I had to try the DVD in two other players to make sure my PlayStation 4 wasn't mangling the audio output somehow, and was dismayed to find the same issue all three devices. As a final note, the chapter markers make no sense and are sprinkled around at roughly equidistant points, rather than taking into account the structure of the episode. I couldn’t fathom a rhyme or reason behind this seemingly random placement.

I really want to like The Devil is a Part Timer more than I actually find myself doing. The first arc is so strong and makes a great impression, surprising and delighting even when you have seen it before. The second half, while still good, cannot quite reach the same lofty heights and left me feeling cool on the series. It doesn’t help that the show is saddled with a poor release, particularly in regards to the dodgy subtitles and a dub track that is an utter write-off. The show deserves better, and these DVDs do not provide it.

English 5.1 audio and Japanese 2.0 audio with subtitles. Extras consist of textless opening and closing animations, commentary tracks on Episodes 1 and 12 with the dub voice director and two principle English dub voice actors, and a short featurette on the series' made-up fantasy language.

6
A devil of a first act and a hell of a comedy wrapped in a sinfully sloppy package.
LATEST REVIEWS