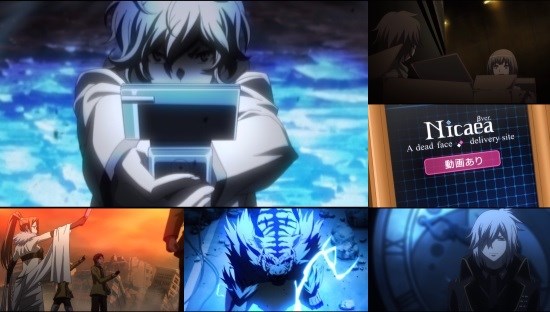 Based on a Nintendo DS game, Devil Survivor 2 revolves around a group of humans able to summon demons thanks to an application from their phones. The application in question also ties into a website known as “Nicaea” which is able to predict the deaths of registered users and send a video clip of said death to everyone in their friends list. After witnessing his own death clip, referred to affectionately by the site as “Dead Face”, Hibiki and his friends gain the power to summon demons in order to live through their ordeal and survive. This leads them to become involved a mysterious organisation known as Jps, whose sole purpose is to fight against the demons that are sent as humanity's daily tests in order to make a wish that will determine the fate of the entire world.

While most adaptations of video games take some time to establish characters and setting, Devil Survivor 2 hits the ground running when delivering it's plot and doesn't stop. As the story takes place over the space of a week, each day is given an episode or two to work with. Within this time the enemy is introduced, the plan to defeat it is established and any surrounding circumstances and which characters are involved is also divulged. While the series does give all the necessary details in order to set up the main plot point for each episode, it feels like its delivering the main story in the broadest terms possible. Several characters in the series don't get nearly enough attention as others, almost all the sub-plots of the game are removed and many of the series features are simply shown and not explained.

For the most part the anime makes it rather difficult to take any interest in most of the characters - given that one of the main plot points of the series tie into a website/mobile phone application that predicts peoples deaths and the attempts of the characters to avert this fate, it feels rather clumsily handled in this regard. Most of the characters in question just appear, get a few scenes to establish themselves as part of the cast and then start fighting alongside the other characters before they get embroiled in a life or death situation predicted by Nicaea. Whatever tension should have been here feels noticeably absent due to the lack of interaction between certain characters and focus on events that should have been established. That being said, the main plot points are handled in a very competent way, providing the right amount of threat and danger necessary to fit the tone the series has gone for.

Alongside the plot, there are a decent amount of action scenes to accompany it, most of which revolves around demons fighting one another. Those familiar with the Shin Megami Tensei series of games will appreciate the attention to detail in the demons designs and how well they transcribe from game to anime adaptation-  however, the demons themselves just become a plot device to show how humans can fight against the threat and rather than taking time to explain the full demon summoning system, the anime chooses to have characters just randomly summon monsters while briefly mentioning mechanics from the game such as the demon auction and so on.

While these details are glossed over, the main story is given a lot of focus and explanation. The anime manages to make the plot the main focus and draw of the show, setting itself up as an apocalyptic series focusing on a group of character's efforts to survive ordeals in order to save the world. While losing a lot of details from the game that gave it its distinct style and charm, the main story does a competent enough job of delivering an enjoyable series. That being said, the series does the job so confidently that it doesn't quite feel like it's doing anything special or unique from the game, and compared with similar series it doesn't really add anything noteworthy to make the series memorable. While the series has good art, music and action scenes, it doesn't fully capture the charm of the games or fully develop or give enough attention to the characters.

It should also be noted that the anime adaptation also has one of Sentai Filmwork's better dubs of late. The dub in question has a rather good script with natural sounding dialogue and some rather decent performances given by its voice cast, making the series equally enjoyable in English. The release's subtitles also show a rather superfluous attention to detail, with on-screen text that is shown as being upside down in Japanese also being inverted in the subtitles. While the subtitles go out of their way to show everything, at times it really helps due to a lot of text appearing from mobile phones or character bios appearing, but it does feel a tad unnecessary to manipulate the subtitles in such a way.

Devil Survivor 2 the Animation, while missing quite a few details with it's characters, themes and sub-plots, manages to provide a rather competent and enjoyable if slightly "by the numbers" adaptation. With an interesting plot, an above average dub and some fun action scenes, Devil Survivor 2 proves to be enjoyable enough and easy to follow for those who have and have not played the game it's based on.

7
A competent video game adaptation that hits all the right plot points but misses a few details.