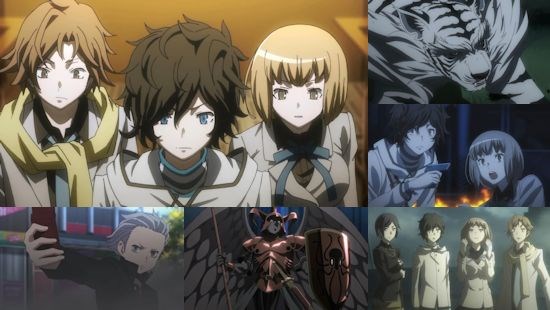 As is also the case within Hollywood movie-making, the history of video game adaptations is a hit-or-miss one in terms of quality - for every notable success there are plenty of brave or downright stupid failures. In anime terms however, the most recent obvious success story is that of Persona 4: The Animation, and in a similar vein this spring sees another Shin Megami Tensei game getting the anime treatment.

Indeed, Bridge's take on this title for Nintendo's handheld consoles seems to take much of its inspiration from Persona 4's playbook - thus, the series is incredibly fast to set up its premise via a brief introduction to a couple of its main characters. From here, this pair of friends - Hibiki and Daichi - find themselves chatting about a so-called "Dead Face" web site; a service that allows you to upload a photo of your friends and then receive a notification, and accompanying video of, that person's death.

Of course, no smartphone app could really predict people's deaths, right? Under this assumption, Nicaea (the site in question) has become a popular yet macabre past-time amongst students, but in Hibiki and Daichi's case, as well as that of their classmate Io, this service is about become a genuine matter of life and death.

Thus, before the first episode is up, our protagonists have seemingly died and come back to life in the midst of chaos hitting Japan via what initially seems to be a natural disaster until all kinds of weird demons and beasties come crawling out of the woodwork. Not only have this trio of students cheated death, they also seem to have inherited the ability to summon demons of their own in the process, and in Hibiki's case in particular such is the power of these creatures that they quickly come to the attention of an organisation tasked with fighting against a menace that threatens to make the entire planet simply disappear.

While some series would have spent half a dozen episodes explaining the nuances of the setting, plot and characters, Devil Survivor 2 is truly an "in at the deep end" experience - by the end of episode one Tokyo is in ruin, and by episode four people are dying left and right with our main trio of characters very much in the front line in the fight against the forces invading Japan. Although this leaves the series open to being labelled as shallow, it's actually very effective in keeping the viewer engaged - there's always something going on, major developments are all of the "show, don't tell" variety, and even the development between characters feels largely organic rather than overly forced.

The series is also reasonably accomplished when it comes to its action scenes - they might not blow you away, but battles feel satisfying and fit in with the broad aesthetic of the show, which looks and sounds good for all its visual quirks in terms of some of the uniforms and surroundings employed by its main organisation.

For all of our obvious Persona 4 comparisons it has to be said that, from these early episodes at least, Devil Survivor 2 doesn't look likely to be able to challenge the sense of character and entertainment that comes from that aforementioned anime adaptation. However, this series still has enough going for it to be well worth keeping an eye on, and its first three episodes are certainly enjoyable enough to make us want to see more.

You can currently watch Devil Survivor 2: The Animation in streaming form via Crunchyroll.

7
A fast-paced and engaging start to a series that might not be ground-breaking but still has plenty to offer.
LATEST REVIEWS