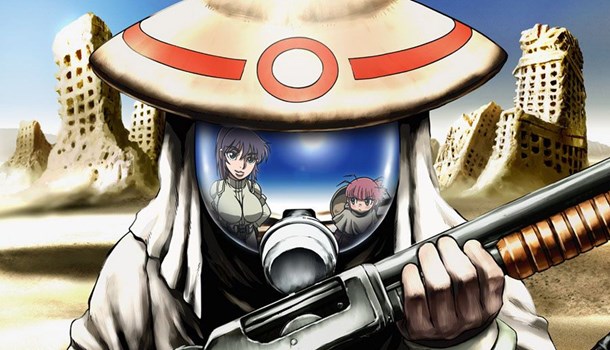 Feared across the Great Kanto Desert, the mercenary known only as the Desert Punk is a legend. His flawless record, accompanied by the tales of his almost mystical fighting abilities are enough to put the fear of God into even the most hardened criminal. A shame then that this particular individual is a short, sarcastic and world-weary kid, who just happens to have enough about him to exploit the crass stupidity of the world around him and make a quick buck.

He's no hero either - though he saves a travelling family from the ravages of some would-be attackers, he proceeds to charge them for his work. The series' mantra, "Get the job done. Collect the money. Repeat" pretty much sums up the philosophy of everyone in the series.

As I've stated before, I'm not a major fan of anime comedy. Half the time the humour translates poorly, and when the Western script deviates too much from the original script, it alienates the fans. Desert Punk has joined a rare anime elite. It made me laugh out loud.

It's clear that the cast had a ball taping this. The script is really fantastic, and while the Japanese vocal track is pretty wacky, it's the almost snide running commentary of the Western dub that makes this disc shine. Seb should love it, the many breast references alone are enough to keep him occupied, but if he was a crack shot then I reckon Seb could BE Desert Punk ^^

An idea for a future cosplay perhaps.

It's the spirit of the series that really endures. I watched it 3 nights ago, and I still find myself smiling about it. Most of the time, when a series tries to introduce sass, it falls flat. Not here. When we're first introduced to Rain Spider, Desert Punk's male rival, it falls to the local village elder to create a cheesy and very cringe worthy pair of 80's rock anthems for each character - a lovely parody considering that doing so just highlights his age. I thought the songs weren't half bad either, but maybe I'm as old as he is!

The final piece of the puzzle is Junko, big of breast and possessed of the feminine wiles to use them, she has DP's number from the minute she meets him, and works as a perfect foil for the otherwise street-smart title character.

This is one to watch - it has action, humour, great pacing and some fantastic set pieces. The animation is crisp and the music is also a lovingly rendered ode to slackers everywhere. But buy it for the dialogue - when the script is this good, the rest is pretty much irrelevant.

A "making of" the live action intro is the tip of a welcome iceberg - there's an audio casting reel that has the English director discussing the cast and playing their auditions, as well as interviews with the series creators.