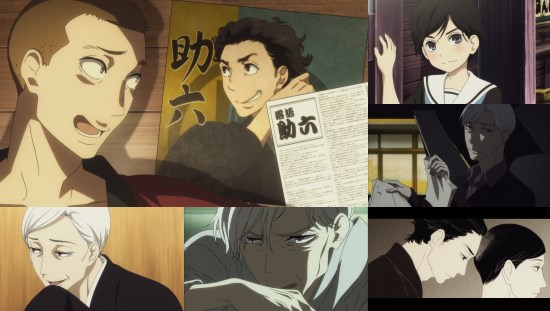 As much as we didn't expect to be particularly entertained by a series about the time-honoured Japanese storytelling tradition of rakugo, to say we were blown away by the first season of Showa Genroku Rakugo Shinju would be an understatement, as its ten out of ten score should attest. Having bottled lightning with its dramatic tale of two rakugo performers framed through the retelling of their story to a young wannabe performer, can its second season - prefixed Descending Stories - do a similarly good job?

While that first season focused most of its attention on the friendship and rivalry between Yakumo and Sukeroku, so this second series fast forwards beyond where that first season began by a decade to find ex-convict Yotaro now plying his trade as a rakugo artist in his own right, under the tutelage of the curmudgeonly Yakumo. While Yakumo has grown into his old age gracefully in some senses to reach the pinnacle of his career as the undoubted star of the rakugo scene, underneath the surface of this consummate professional is a seething undercurrent of frustrations, regrets and self-loathing as he blames himself for the fate of Sukeroku.

Although most of Showa Genroku Rakugo Shinju's cast get plenty of time in the limelight - be it on the rakugo stage or off it - at its heart this second season of the series is a brutally intense character study of Yakumo himself, and in a wider sense is a truly unique work within the anime field as a study of old age and death. After a relatively slow start to the series as it acclimatises to its new era and some new or matured characters, it slowly but surely hones in on Yakumo's increasingly troubled and hypocritical view of himself. On one level, Yakumo is a proud man who hates what old age is doing to increasingly ravage his body - and with it his ability to perform on stage - yet on another he wills on the decay of his flesh as a just punishment for outliving his close friend and rival. On one hand Yakumo yearns for death and even seeks it out as the remaining joys in his life seem to grow more distant, yet when death comes to embraces him he recoils in terror. I can't think of another anime character who has been depicted in a way that is quite so... well, "human". This is no brave hero or comedy side-show, and there's no eternal school life or loving wife for Yakumo, leaving him exposed to the harsh realities of old age and presenting him with stark choices as to how and where his memorable life might end.

It's really this story that dominates Descending Stories, and rightfully so as it's as good as story-telling - anime or otherwise - gets. As you follow Yakumo on what is ultimately the final leg of his life-long journey you'll find himself hating him at times, sympathising with or even feeling sorry for him at others, marking him out as the very personification of a living, breathing human, foibles and all. When the end comes it's beautifully handled in a way that left me an emotional wreck, and although the series finale almost makes one massive misstep it doesn't spoil an otherwise satisfying ending that quite rightly reminds us that life goes on long beyond our own. All of this is punctuated by plenty of strong stories from the rest of the cast - Yotaro's rise to stardom isn't without its hurdles, and his extended family also have challenges of their own to face up to.

Much like the first series, Descending Stories' impact is further accentuated by its direction - the show's use of imagery, perspective, light, dark and colour all add greatly to both the situations at hand and how they're relayed to the viewer. One great example of this is a scene where a sickly Yakumo goes out for a walk, only to find himself face-to-face with Yotaro - over the course of the subsequent conversation, Yakumo's initial place as the dominant force in the conversation sees him as the prominent figure in the shot, but by the end of the scene as Yakumo's weakness becomes clear so he almost visibly shrinks. Ultimately, he's left crumpled quite literally in Yotaro's shadow, illustrating the change in dynamic between the two and saying plenty without a spoken word. There are plenty more examples of this throughout, and this second series proves to be even more imaginative as it finds itself dealing with the prospect of death and the afterlife in some striking ways that manage to sit soundly inside the otherwise realistic world that the series inhabits.

Also as per series one, we really shouldn't underestimate the power of the show's voice cast in adding to the lustre of the production. Once more, we're treated to some fantastically delivered and compelling rakugo stories by various members of the cast. Akira Ishida in particular excels in his performance as Yakumo, bringing all of the varied performative elements required of the character to the table with aplomb. It's easy to imagine a series where Showa Genroku Rakugo Shinju's strong story was let down by sub-par presentation, but thankfully this isn't the case here, and as mentioned the visuals, voice cast and even the soundtrack all combine to create a near-perfect drama that is without compare.

Indeed, were it not for that slip-up in its final episode and a bit of a slow start, we'd probably be talking about full marks for this second season of Showa Genroku Rakugo Shinju just as we granted the first. Even with its minor stutters though, the series as a whole is an incredible achievement, and perhaps the finest animated drama you'll ever see. Set aside your concerns about its subject matter and whether it'll resonate with you, as rakugo is only a vehicle to exhibit so many facets of the human condition via well-realised characters and an immaculate presentation which accentuates it all. Showa Genroku Rakugo Shinju is a stunning feat, and we really put our praise for this show any more succinctly than that.

You can currently watch Showa Genroku Rakugo Shinju in streaming form on Crunchyroll.

9
This second season treads a different path than the first, but in many ways its story-telling is even more evocative this time around to create one of the best drama series you're ever likely to see.
LATEST REVIEWS
Girls' Last Tour