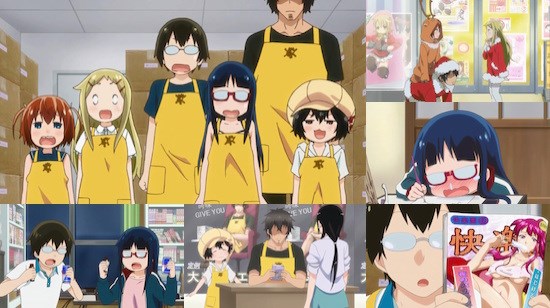 Denki-gai is a comedy based in the fictional Umanohone book shop, a shop similar to many of those found in our UK Anime Guide to Shopping in Japan. By way of example you will notice familiar, but slightly altered, names such as “Unimate" (Animate) scattered throughout the series. Each episode is split into two sub episodes and, much like the daily operations of the shop in which the characters work, most episodes more or less stand alone while sitting within a larger (albeit wafer thin) overall narrative. These mini-episodes are (so far, at least) mainly one shot stories which conclude within the allotted time rather than spanning multiple episodes.

So far there has not been much in the way of character development in Denki-gai, and I suspect there will not be as it’s not really that kind of show. The characters themselves are largely walking anime tropes and the nearest thing to a main character is probably Umio, who is himself a walking otaku stereotype and Sensei’s biggest fan. Then there’s the aforementioned Sensei, a doujinshi artist and aspiring mangaka - visually Sensei actually reminds me a little of Tsukimi from Princess Jellyfish; perhaps it’s those glasses. Next up is Director, the most senior member of the team (other than the manager) and an obsessive with a video camera; Hio-tan is the cute and accident prone one of the bunch; Sommelier can divine anyone’s ideal manga just by looking at them, he makes up the tall and mysterious faction of the group; Fu Girl is a violent and borderline psychopathic zombie fanatic; and finally Kameko is an obsessive but shy photographer who is always carrying a camera. Denki-Gai also sports a fairly basic but interesting animation style, which suits the series really well.

This combination of stereotypical characters and relatively basic animation means the series can concentrate on what it's really all about: the comedy. Right off the bat it’s clear that Denki-gai’s premise is simply to make you laugh - the jokes themselves can be a little hit and miss, with the majority being pretty crude. This is not sophisticated humour by any stretch of the imagination, with innuendo and slapstick lurking around every corner. That said, even if low-brow humour isn’t normally your thing you will almost certainly find yourself laughing along to this series, and there are some big laugh out loud moments to be found here - do not watch Denki-gai while drinking tea, you will end up spitting it out as you find yourself laughing at something you know you really shouldn't.

Denki-gai then is an odd little series, I feel I shouldn’t really like it but it keeps me laughing regardless, and it's better that than its combination of crude humour and thin plot have any right to be. In summary: If you like crude jokes you’ll love this, but even if you don’t like crude jokes you’ll probably still find yourself laughing along. Just remember to avoid it if you’re easily offended or don’t want to hear adult books being mentioned in nearly ever other sentence. Otherwise give it try, you might just be pleasantly surprised.

You can currently watch DENKI-GAI in streaming form on Crunchyroll.

7
An intriguing, amusing and smutty take on life in a Japanese book store.
LATEST REVIEWS