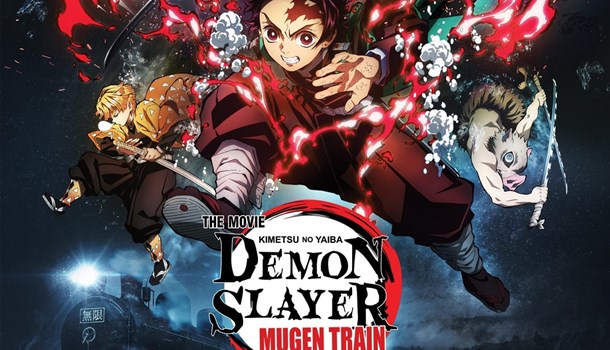 Taking place directly from where the TV Anime series left off; Demon Slayer Mugen Train follows Tanjiro and his group of friends as they Board a train in order to assist Rengoku, The Flame Hashira, one of the high ranking members in the Demon Slayer Corps to investigate and hunt down a demon that has killed several Demon Slayers. During their time on board they are caught in the sleep spell of the demon responsible. Caught in the Demon's trap the group now faces a dangerous situation where they are caught in their dreams unaware of what perils are in store for them if they awaken.

Usually when an anime franchise is given the movie treatment they are given a movie that can be viewed standalone that can be watched by fans of the series and newcomers. Usually by front loading the film with exposition and information as to not confuse a new audience. Demon Slayer Mugen Train takes a different approach and launches into things head first. This story arc is a main part of the manga series. The Movie wastes no times in getting things moving assuming that the viewer will already be up to speed on everything going on so far in the story and needs no explanation on who characters are, what their motivations are and generally how things work in the context of the story. The film does have the occasional moments to explain things but like most anime this can be seen as just a reminder rather than an outright explanation. This approach gives the film a rather steady and quick pace. Adapting an entire story arc of a manga into a two hour movie distills the story down into a movie that moves through events with a confidence and clear cut focus showing only the necessary set of events.

Speaking of events. This film itself feels like an event. Mainly due to this being the first film I've watched in the cinema in well over a year. And also being the first film I've gone out to see following the recent lock downs. I should state that as of the film's screening. I had received both my doses of covid vaccine, enough time had passed for them to be effective and that only due to this fact did I feel confident enough to venture out to the cinema. The experience of seeing a film in the cinema, adhering to social distancing, sanitisation guidelines and wearing a mask in a world felt weird. It felt very different to the cinema experience I was used to. In the past I went to a movie and became fully engrossed on what was on screen; completely forgetting about everything else. All that mattered in that moment was the visuals on screen and the audio from the cinemas surround sound system. Here, this didn't feel the case. I felt anxious throughout the movie. The state of the world at the moment was a constant thought in the back of my mind. Thus preventing me from fully letting go and allowing myself to be absorbed by the film.

Having said that there were moments that truly amazed me and brought me out of this mindset. Allowing me for the briefest of fleeting moments to enjoy the film and be caught up in it's spectacle. The first true moment of this was during one of the film's dream sequences. The imagery of the snow looked so amazing that I was completely lost in it. Since viewing the film I am yet to think of another anime that had snow look quite as real or even as good as that. Secondly the fight scenes in the film were incredibly impressive. With UFOTable's amazing fight choreography linked together with the stylistic approach they've taken to animating the fire and water effects on the Demon Slayer's Sword attacks combined together with the atmospheric soundtrack that paired brilliantly with what was on offer allowed me to relax a bit and enjoy the film.

However there were some aspects that just didn't work for me and pulled me back into reality. Mainly the comedy. I've never really been a fan of Demon Slayer handles comedy and this film is no exception. Most of it's comedy stems from characters shouting, being annoying or having those exaggerated arguments where one character will just shout back louder than the other. Upon seeing these moments I was taken out of the film and reminded of the complexity of the situation at hand. It didn't help that the audience full of people also didn't seem to find any joke in the film funny at all. I contemplated this after the viewing. Was everyone else also over thinking the current pandemic situation about watching films in a cinema at this time. Do the masks muffle the laughter making it hard to hear. Or do their senses of humour align with mine and they also just didn't find any aspect of the comedy funny. I posed the question to others if people were laughing at their screening. And got a broad spectrum of answers. In this instance it could be shown that comedy is subjective. Although I do feel if not for the current situation I would have been in a more relaxed mood and opened myself up to the comedy aspect more.

With all that in mind Demon Slayer Mugen Train is a rather interesting Anime film. It is one that acts more as a bridge between one anime series and the next. Without going into to much of the plot the film does a rather good job of reinforcing how much of a threat the Demons really and acts as the inciting incident for moving the plot forward into a direction that will obviously make the Demon Slayer Corps take more direct action in their war against the Demons. While it does lack in the comedy department, it makes up for it in moving along the grander plot, showing off the artistic abilities of the animation studio and moving along at a rather quick pace. While the film was two hours long, even with the moments of realisation that brought me out of the film. It never felt like it. It moved along rather quickly and was very enjoyable. Fans of Demon Slayer need to see this film.

8
Stylistic animation that fans of the anime series will love