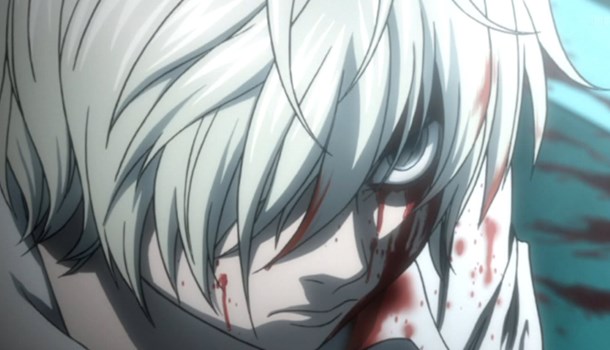 Since covering the fourth volume of Death Note a few months back I've been on tenterhooks waiting for this final two-disc volume of the series to drop through my letterbox, more than a little eager to see the climax of Light Yagami's efforts to create a world shaped in his image and whether his wits and cunning will bring him to his ultimate goal or abject failure.

While the general pace and style of the series is well established by this point, there are still yet more cats to be set amongst the pigeons as Sidoh, another Shinigami, appears to retrieve his Death Note, while Light's megalomania leads him to make a massive sacrifice as he attempts to retrieve that same notebook lost to Mello, while defeating this potential successor to L in the process.  All of this plays out against a backdrop of a world where Kira is more revered (or should that read terrifying?) than ever before by the general populous, springing forth TV shows in his honour while even the President of the United States publicly announces his acceptance of Kira's reign.

These scenarios soon lead us into the final act of this thrilling drama, which in many ways is a return to those classic earlier episodes, as Light finds himself facing off against Near in a battle of wits and wills that see-saws between the two as they attempt to out-manoeuvre one another in this life and death game of chess.

Certainly, these closing episodes of Death Note know what the viewers of this series love and expect by this juncture and they provide it in spades, thrilling in those occasionally implausible but always fascinating twists, turns and surprises which are the hallmark of this show.  I've commented previously that the loss of the quick-witted conflict between Light and L was a bit of a blow of sorts to the show, but thankfully the climax to the series comes close to recreating this as Near works to ensnare and prove Light's guilt - He may not be quite as enigmatic and compelling to watch as his predecessor, but he does enough to make for some fascinating encounters.

Of course, even the best of series can be spoiled by a poor ending, and doubtless some will like Death Note's finale better than others; personally, I have to commend its teasing ramping up of dramatic tension, and the satisfaction of reaching a solid conclusion does more than enough to make up for some arguably out of character moments over those last two episodes.

If you've watched the first four volumes of Death Note on DVD, then you'd have to be insane not to want the final volume to finish off this most fascinating of tales so this review is no doubt preaching to the converted anyway.  Putting that to one side however, this closing volume of the series is as technically accomplished as we've come to expect from Manga Entertainment's releases, coupled with a pretty impressive selection of additional content.  There's a reason why Death Note has become the sensation it is, spanning anime, manga and live action movie forms, and from watching the compelling climax to this gripping series, it's easy to figure out what those reasons are.

9
A fittingly crowd-pleasing finale to the series, full of the quick-witted twists and turns that we've come to know and love.
LATEST REVIEWS