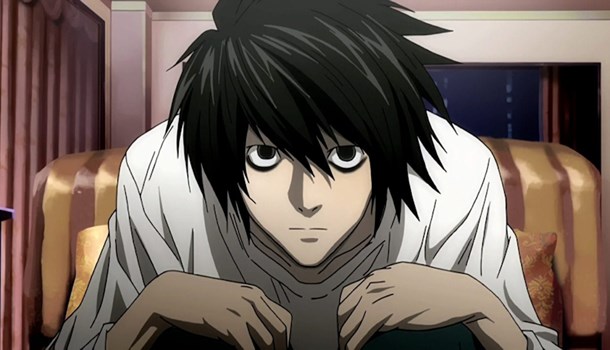 Hmmm, is there really anything more that I can say about Death Note apart from "buy it"?  When it comes down to it, it really is that simple and I would wager that a lot of you reading this probably already know that, such is the reputation of Death Note amongst anime lovers.  Anyway, I can't leave you with just a two word review - or can I?....

Nope, you're still here, so on to volume three of Death Note and another eight episodes of thrills and tension.  The end of volume two left us with Misa, Light and his father in confinement under the watchful eye of L, who is by now convinced of the identity of both Kira and the second Kira... But then the killings start again with the suspects still under lock and key, so what now?  As you would expect from this series, L isn't one to do things by halves, and thus devises one almost brutal final test to try and prove the pair's guilt or innocence.

From here on in, the series actually shifts focus for much of the episodes contained on these two DVDs - After being so used to seeing this grand battle of wits between Light and L, we're suddenly left with the two of them genuinely working together to track down the new Kira, who himself seems to be branching out from simply killing criminals into new areas.

If I'm honest, this change only serves to work against some of the strengths that the first two volumes of Death Note had in abundance - The underlying philosophy between Light and L's individual struggles was always a fascinating backdrop for the series, and the undoubted intelligence of the two made for a top-notch game of cat and mouse detective work.  While it is still occasionally fascinating to see the two of them working together, and there are some expertly created plots and moments of unrelenting tension, the opponent they are put up against really isn't worthy of their attentions beyond possession of a Death Note.  Thankfully, the lead-in to the next batch of episodes puts us well and truly back to where the show excels.

Now, despite those criticisms I'm not saying that I didn't enjoy this volume of the series, far from it - It's probably fair to say that even a few slightly less majestic episodes of Death Note still succeed in being far more gripping and entertaining that the vast majority of anime can managed even at its peak.  That, coupled with the fact that this is such an excellent series overall, means that volume three of the show is still a must-have, and this is further bolstered by a decent array of extras on the two discs, including English voice actor interviews and audio commentaries on a couple of episodes - Far more than you'll find on most anime DVDs these days.

Overall then, I'll have to admit that for much of these eight episodes we don't get to see Death Note at its best, but damn is it still fantastic.

8
Not quite Death Note at its best, but still an intensely watchable batch of episodes that shouldn't be missed.
LATEST REVIEWS