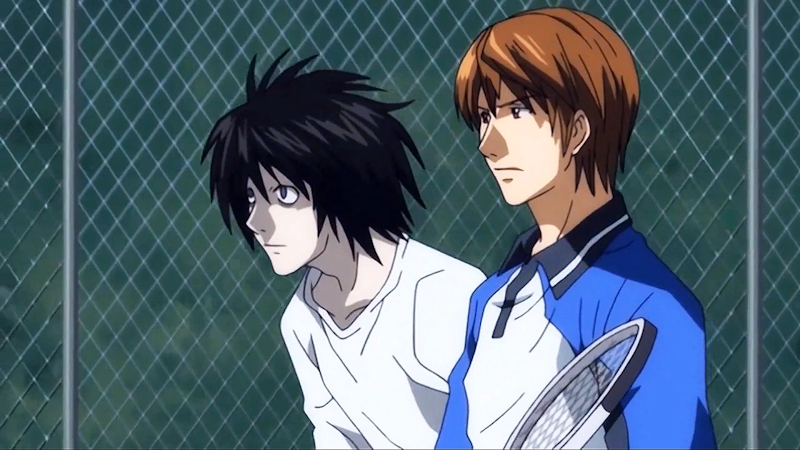 By the time I'd finished watching the first volume of Death Note on DVD, it was hard to think straight amidst the swarm of superlatives flying around in my head following what was, for me, one of the most gripping anime series I'd sat down to watch in a long time.  It was with more than a little glee then that I received volume two of the series, in the hope that it can continue in the same direction.

Of course, this second volume continues where the first left off, with Light Yagami under heavy surveillance, a pressure which he shrugs off thanks to some quick thinking and clever planning which allows him to continue his role as the self-professed bringer of justice and killer of criminals known to the general populace only as Kira.

Although this period of surveillance is endured with relative ease, the battle of wits and wills between Light and the mysterious L who heads up the police investigation into Kira has only just begun, with things soon getting far more up close and personal as L chooses the beginning of Light's college life as a perfect time to enrol as a student and make himself known to his number one suspect.  So, this intense yet strangely placid conflict rages on, with even a simple game of tennis between the pair taking on a massive significance as proof of Light's guilt or innocence, while a very odd relationship builds between the pair to further intensify the verbal, psychological and intellectual jousting between them.  This relationship is thrown into even sharper relief as time progresses, as a chain of events begins which threatens both L and Light....

While much of the first volume of Death Note focused on Light's drive to 'purify' the world, and the question of whether killing criminals is the right way to do this, this second batch of episodes shifts the focus entirely to what is in essence the real crux of the series - The near-constant state of showdown between the two main characters.  While the introduction of additional players to this game of cat and mouse arguably dilutes the impact of the two going head to head at times, it still offers the kind of gripping drama that it's hard to find anywhere else, with enough moments that leave your heart in your mouth or your palms sweating at a pivotal moment to make you realise that this is a very special series indeed, and at times a near flawless execution (no pun intended) of the concept which lies at the heart of Death Note.

If there's one criticism you could level at this series as it progresses, it's that the change of focus away from the criminals and the like being killed by Kira removes much of the feeling of urgency and morality surrounding some of those earlier episodes.  At times it simply feels like a languid game of chess, without too much hurry or panic being shown by either faction.  This apathy towards any victims of Kira's sprees also tended to seep into the conscience of this reviewer - While during volume one I found myself shocked (albeit impressed) by Light's cold logic and abilities, by the end of this second volume I was all but cheering him on at times, even though I would wager that I probably shouldn't be.

However, that gripe really isn't enough to detract from the key point that I'm trying to make here - This series, and the episodes contained within the two DVDs available here, is simply fantastic.  Great characters, pretty good animation, and an absolutely top class concept and storyline makes this a bona fide, 100% must-watch series, a hearty recommendation that is only furthered by this releases pretty decent smattering of extras.  The bad news is that I simply don't want to wait for volume three now after the intriguing set of affairs it leaves us with....

9
No words can really describe the thrill of watching this series, you simply have to try it out for yourself.
COMMENT AND DISCUSS
blog comments powered by Disqus