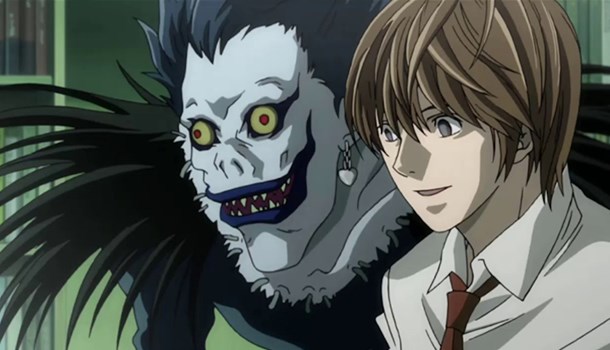 Explaining the premise of Death Note and reviewing its opening volume as it makes its way to Region 2 DVD is, for many of you reading this, probably a case of preaching to the converted.  Indeed, this anime (and the manga from which it is adapted) already holds many of the traditional hallmarks which mark it out as a classic - It's much talked about in anime-related circles, it's been adapted into a live-action movie in Japan, and it's been blamed for a handful of 'copycat' incidents in the media.

Light Yagami is, despite being an exceptional student, a normal young man when we first meet him.  This soon changes, as a mysterious book falls from the sky in his school grounds - A book labelled as a 'Death Note', complete with instructions on how it works.  Of course, a bright young thing such as Light wouldn't fall for such a childish prank - or so he contends, until curiosity gets the better of him, and after taking the book home he gives it a try.  Simply write the name of the person you wish to kill, a time of death, and wait... Light soon realises that this is no joke, but a 'gift' from the land of the dead courtesy of a bored Shinigami named Ryuk, and thus the premise of the show is set, as he soon sets about writing the names of every criminal he hears about in the Death Note, revelling in his new-found position as a deliverer of justice, or perhaps even a god.

Of course, masses of criminals dropping like flies soon attracts the attention of the authorities, which brings us to the 'yang' of Light's 'yin' (or the other way around, depending on your line of thought - and yes, I do see the joke there) - a mysterious figure and who resolves even the most complex crimes who refuses to show his face, a man known only as 'L'.  Like Light, L has a brilliant mind and he's not afraid to use it, and his interest in the case of these mysterious deaths soon turns into a cat and mouse battle between the two men, with both believing that they are the one fighting for justice.

The early episodes on this first DVD volume of Death Note kick off with a fascinating (and indeed age-old) moral question - Is it wrong to enact revenge on the most heinous of criminals by killing them?  Light believes that ridding the world of known criminals will make the world a better place, a view not shared by L's opinion that murder, no matter the circumstances, is murder.  As time goes on and the 'war' between the two main characters begins in earnest, we soon see a different, far more selfish side to Light, one who has no qualms about killing anyone who might stand in the way of his new world order, and his desire to be seen as some kind of god.

Light's move towards 'the dark side' (for want of a better phrase) removes much of the moral aspect of the early episodes of the series, and instead brings us that thrilling cat and mouse game between himself and L which I spoke of earlier.  While there's little in the way of direct action on show here, the tension in each and every episode is built expertly, with the series playing out much like a game of chess with each side making his move, only to be countered by his opponent.  Quite simply, it's gripping, edge of the seat stuff, making every moment of each episode fascinating to watch.

In case you haven't guessed it from that last paragraph, I fell in love with this first volume of Death Note very quickly, and very hard.  It's a great premise expertly delivered in every way, from the animation (which is good without ever being show-offish) through to the near-perfect pacing of each episode.  While Light's evilness can be a little over the top at times (note to script writers: characters can be Machiavellian without laughing evilly in every other episode), that doesn't detract from the fact that both himself and L are fascinating and intellectual characters who are both a delight to watch, and the story which follows them is equally top-notch.

To sum up this first, two disc volume of Death Note is quite simple - Believe the hype.  Whatever people have told you about how good this series is, it's actually even better.  Add to that the excellent package of extras Manga Entertainment has offered up here, and you have yourself a must buy DVD.

9
All the hallmarks of a classic anime series - A must-watch.
LATEST REVIEWS