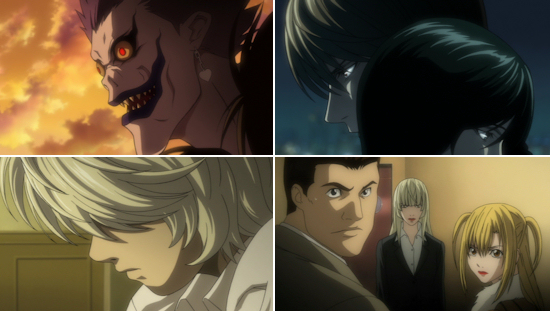 This review does contain spoilers, so please look away now if you don't want to see them ^.-

This second compilation of the Death Note TV series deals with the Near/Mello arc, following on several years after Light's victory over the super-detective L, and his subsequent assumption of L's identity.

As with the first disc, the original TV show episodes are compiled and bridged with new animation to create a feature-length version of Light's epic struggle to bring the world to justice. The new animation on show here is minimal, and while a lot of the filler is removed, it's still the poor relation to the first arc.

That's not to say that Relight: 2 isn't worth your money. In fact, thanks to the rather excellent editing, this new version of the latter day Light is far more palatable than the original TV episodes, which were cumbersome to begin with.

Curiously I did find that, while the film was punchier in terms of the narrative flow, the payoff at the end wasn't nearly as good as the TV series. Certainly Misa's fate is less clear (and it wasn't obvious the first time around) and the final scene fizzles rather than going out with a bang.

Still, all negative comments aside, this is a stylish, beautifully animated tale which does justice to the Death Note legacy and will be mana for those who didn't want to invest in the 37 individual episodes. For £30 you can get the lot in a nice, digestible version.

Would I pick this and it's predecessor over the TV show? Probably not if money were no object. There's still something to be said for ending each episode on a cliffhanger, and though the films are tight, they don't compensate for the rush of seeing what happens next in an episodic format.

7
Still a great tale, all the better for losing the fat, but there's not enough that's new for those who have seen it already.
COMMENT AND DISCUSS
blog comments powered by Disqus