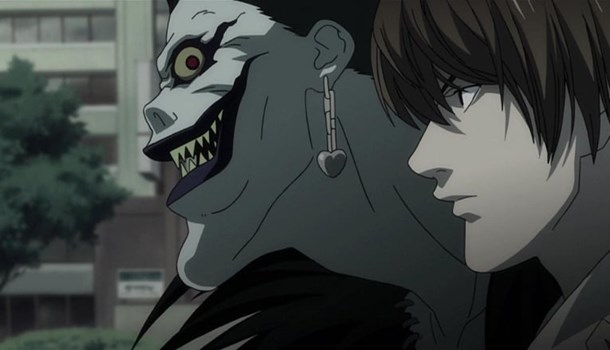 Death Note: Relight is a feature length film that encapsulates the first half of the Death Note TV series. Featuring some new footage which bookends the existing animation, it's pretty much "Death Note Lite".

The film begins in the Shinigami realm with a Shinigami seeking out Ryuk, in search of a good story. Ryuk accepts an apple for his tale, and subsequently we join the abridged yarn which remains pretty much unaltered from the TV story. There's a new scene involving Light gloating over a grave, but otherwise it's just a heavy edit of the TV series.

That said, it does a better job than most. It's common practice for an anime to receive the scissor treatment in order to create a theatrical release, but almost all of them are diabolical. The story on offer here actually flows at a believable pace and has been edited into a cohesive end product. Kudos to the editors then.

It's not hard to see who this is aimed for - if you're a newcomer to Death Note then this is a great jumping-on point. For those with the original TV series, there's about 5 minutes of additional footage here, and none of it really adds anything to the story.

Those who found the second arc lacking (and I'm one of them) may find that this abridged version is actually preferable due to its absence, but those who enjoyed the Near/Mello arc will be pleased to know a second movie is due soon to tell the rest of the tale.

Extras include the usual trailers, the original "Relight" promos and an interview with those behind the movie edit, which is entertaining enough but hardly a revalation.

8
An excellent summary for those who want an abridged version, but you still can't beat the TV series.