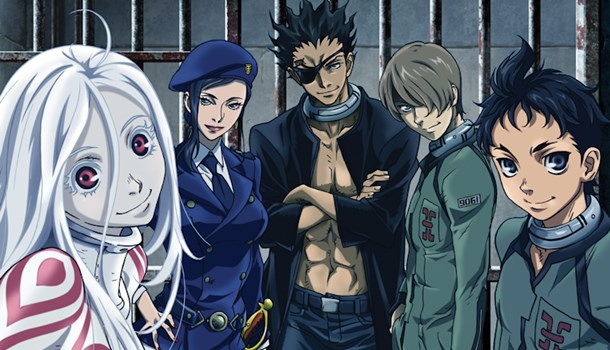 Brutal, barbaric, violent, obscene, gory and depressing. These six words define what Deadman Wonderland is, and what makes this series something just a little special this Spring Anime Season.

I want you to imagine a place rather like Disney World, with the joyous parading of characters on an daily basis, and the worst scum of Strangeways Prison (HMP Manchester) brutally butchering each other in gladitorial games, also on a daily basis. Now, with these two thoughts in your mind, consume some LSD (Don't try this at home, kids! -Ed). The result of this is perhaps a taste of the morally broken world within which Deadman Wonderland is set. A world where the cruellest of convicts, those found guilty of rape, gross murder, child molestation and manslaughter, are paraded in front of the public within the facade of a theme park, killing each other out of desperation for your amusement. This is the kind of world which Ganta Igarashi, a high school student convicted for the brutal murder of his class mates and friends, now finds himself in.

For Ganta, being sentenced to life imprisonment and humiliation within a brutal mockery of a prison is not even the start of his ordeal as it becomes evident that he has become "infected" with a blood disease which gives him strange powers while he also meets a peculiar girl named Shiro, who seems to know him very well. Add this to the daily attempts on his life, the savage daily contests for the life giving candy dished out by the prison and the constant taunts in the shower, and life is just peachy for poor little Renton... sorry, Ganta.

Deadman Wonderland has managed to reel me in and simultaneously taunt me with its barbaric style, its depressing and tragic story and with the dangling carrot that is the promise of a strong story, conspiracy theories and well written dialogue. Bliss.

It’s just a pity I keep mixing the characters of Ganta and Shiro up with Renton and Eureka of Eureka Seven fame. Seriously. I am aware that the anime character pool is a bit small and incestuous at times, but did RGanta have to both look and sound so much like Renton? Another thing, since I am in the mood to whinge a little; whose silly decision was it to give Nirgilis, one of the few J-Pop groups who I am actually fan-ish about and who produce beautifully up-beat tracks, the ending to this particular sob story?  "Shiny Shiny" is not the track I expected to close out this series, and it messes with me. Gah!

These minor gripes aside, I firmly believe that Deadman Wonderland should be on everyone's "to watch" list this season; not for the fact that it is a horrifically beautiful exhibition of violence and broken morality, but because it's brilliant and messes with you on a more fundemental level. It’s the kind of series that leaves a funny taste in your mouth, a feeling of what the $%£$ and a Hannibal Lecter smirk on your face... or maybe that’s just me.

8
Let this be a lesson to all of you to act nice in school!