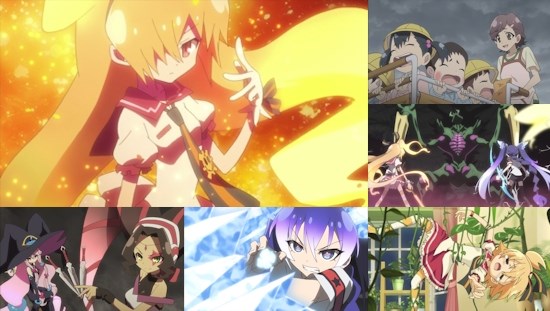 Given the stratospheric success of Puella Magi Madoka Magica, it's amazing that we haven't seen more series try to offer up a darker take on the magical girl genre in its wake, but for the most part recent years have brought us a diet of pretty by the numbers offerings. However, this season sees il sole penetra le illusioni - aka Day Break Illusion - reach us in streaming form; a series which stakes a claim to inhabit a dark place from the outset.

Our protagonist for this journey is Akari Taiyou, a much-loved young girl with a talent for using Tarot cards - an ability which she's fostered and practiced in despite the best efforts of her late mother to prevent her from doing so. For all of the love afforded Akari by her friends, classmates, grandparents and cousin Fuyuna, in that latter case we soon see signs of jealousy bubbling under the surface. This quickly comes to a head in a disturbing way, as Akari and Fuyuna clash in a seemingly fatal series of events - but it did it really happen? Did Fuyuna even exist? Her sudden disappearance from the series without anyone mentioning her or giving her a second thought seems to suggest that she was never there.

It's this occurrence that gives us our starting point into a world where a team of magical girls with various abilities are gathered together within a so-called academy to tackle and destroyed supernatural creatures known as Daemonia, who seek to dump their misery upon humans. Needless to say, early revelations about the Daemonia also seek to explain Fuyuna's disappearance, giving Akari some knowledge that leads her to question whether her own role in fighting the Daemonia is morally "right".

Akari wrestling with her conscience as she tries to get to the bottom of the true nature of the Daemonia, coupled with suggestions that even the magical girl academy that she is part of is perhaps less wholesome than it might first scene, are clearly the dual key drivers for the series at this point - both aspects of the series have no shortage of potential, but at this stage it's hard to say that any of the ripe possibilities of the series have been used in a competent way at all. So desperate is the series to shout about how dark and edgy it's being that it misses out on a lot of its build-up and jumps straight into death and darkness in episode one before offering up similarly maudlin second and third episodes.

Unfortunately, this means that there's no time to build up any characters so that we actually care about them, leaving Fuyuna's disappearance to leave little impact upon the viewer other than outright confusion, while episode three in particular becomes so heavy-handed in its attempt to show how a Daemonia might threaten humanity that it unintentionally descends into hilarity. I imagine this might be how Madoka Magica ends up looking if you watch it in fast forward.

Similarly, the show's visuals clearly try to take a leaf out of Madoka Magica's book by offering up cutesy character designs before throwing them into despair, but although some aspects of the show's aesthetic are pleasing as a whole it looks unspectacular and occasionally rather cheap. This might not be an issue when bolted to a stronger narrative, but here it simply detracts further from what the series is trying to do.

Although it's far too early to write off Day Break Illusion entirely at this juncture, it certainly hasn't done itself any favours with its opening instalments - it's clumsy, its tries way too hard to foist its tone upon every part of the series, and as a result it doesn't place enough care and attention in character or world-building. We'll be the first to admit that there are still some promising seeds of ideas and concepts within the show, but for now we can only comment on what we have in front of us, and in those terms these first three episodes are nothing more than a major disappointment.

You can currently watch Day Break Illusion in streaming form on Crunchyroll.

4
The series as a whole has some promise but these early episodes are rushed, clumsy and unsatisfying, so massive improvement to its execution is required to deliver on that potential.
LATEST REVIEWS
Girls' Last Tour