Darker than Black: Gemini of the Meteor 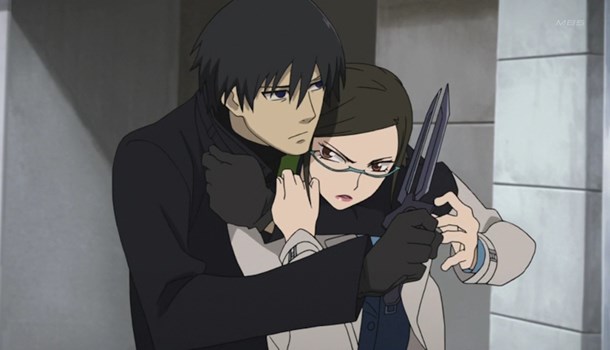 Darker than Black: Gemini of the Meteor

Ho ho ho! How’s that Christmas Dinner treating you? Well, how about something different to go with all that leftover turkey - perhaps an espionage tale with super-powers, secret agencies, and anti-tank magical girl sequences? Doesn’t that sound better than yet another monster tin of Quality Street?

I must admit I feel like I am adding disclaimers to the bulk of my recent reviews and here is yet another one - you must have seen season one of Darker than Black to watch this new one, otherwise it’s going to get confusing very quickly as the show unrepentantly assumes you have seen it. While the show does have a very brief catch up on “Contractors”, the emotionally dead super-power users that make up a good proportion of the cast, a lot of world building points are flat out never recapped in this second season. So, if you haven’t seen season one - well, it’s the end of the year, surely you have time off school/work and can fit in the time to watch it? You can see UK Anime’s reviews of the first series here.

This new season follows the exploits of one Suo Pavilichenko, a girl living out in the frozen back end of Russia with her grumpy researcher father and crippled brother. She likes photography and is generally a harmless dumbass with nothing to worry about. Her rather benign existence is brought crashing down when a slew of secret agencies with enough codenames and acronyms to tounge-tie anyone come to kidnap her father and her brother. Things start to go even more awry as it turns out that the various secret agents are not there to take prisoners, and in some cases alter the memories of the townsfolk including Suo's friends. Just as you think things can't get much worse, Suo ends up being kidnapped by/falling in with the protagonist from season one of Darker than Black, the mercenary/assassin Hei (also known as Li Shengshun, Chinese Electric Batman, BK201, and the Black Reaper), who has taken a severe turn into depression and alcoholism since the events of the previous season two years ago. Suo, along with her grumpy (and somewhat abusive) kidnapper/bodyguard/teacher go on a trek to Tokyo to re-unite with her brother, who has managed to elude the clutches of the alphabet agencies after him.

You'll notice that the previous paragraph is pretty damn huge, and that's even with my leaving out of various additional plot threads. Put simply, there is a lot of detail to the plot presented in this series, and while I do have some major qualms (those are coming next!) none of it feels trivial or padded. Suo's story as she treks from Russia to Tokyo is very well paced, with various plot elements and road blocks only lasting as long as they need to before being gracefully retired. It's honestly refreshing to have a show that seems (mostly) aware of how to use its time - one particularly great example is a sub-plot involving a dysfunctional family Suo meets in Hokkaido. They are introduced, play their part in world-building, foreshadowing and developing the cast of characters, and are then elegantly resolved and vanish from the plotline. Silly things are said, lessons learned, tears shed. It's a great little arc. This and many other elements really help to flesh out the world that the characters inhabit - its a very melancholy Earth where people still try their best to get on with life, even while supposedly non-existent (but everyone knows about them) super-powered sociopaths roam around. As in the first series, suspension of disbelief can be strained at times as almost everyone is a member of one or more secret spy agency, plot or crime ring and there are few “normal” people to ground the events that are happening.

The main problem I have with this series that that this is not the only on-going plotline - Hei, as well as some other returning cast members from the first series of Darker than Black, return with their own distinct narrative that needs to be resolved. At the best of times, the two plots intertwine well, but oftentimes the two narratives bump into each other awkwardly like a pair of dizzy kittens. The previously mentioned lack of recap on the events that occurred in the first season also extends to the complete and utter silence on what happened in the intervening two years from the mainstay of the series itself. This feels inexcusable given the massive changes in character and situation that have occurred during this time. It really cuts the legs out from under this second plotline, robbing it of any kind of impact and leaving it floating around as a context-less mess, confusing me every time it came up on screen. I’m no fan of flashbacks, but by the end of the series I was almost begging the show to give me one just to give some backstory on the events that were happening apropos of nothing I was aware of. At times the show seemed torn between wanting to very directly tie into the events of the first series and ditching them entirely in favour of the new plotline - neither side won out conclusively, sadly.

There are other holes to pick in the story - I promised I would get to these! One lesser point is that due to the multiple plotlines ongoing and the sheer density of the plot development going on things can at times get to be too much - particularly as the storyline dabbles in elements of memory alteration, untrustworthy narrators, and some rather oblique foreshadowing. All of these are lovely things but the lack of downtime to process them, especially towards the end, can leave you overwhelmed. More pressingly, the series really loses a lot of its cohesion in the final episodes. While a lot of events are cleverly foreshadowed, the lack of context for a lot of events not directly related to Suo’s plotline can leave you twisting in the wind saying “well, I guess that just happened.” This lack of cohesion turns into outright unravelling in the final five minutes of the series as the show loses all of its momentum and crosses the finish line with a limp flop. I wont give spoilers of course, but the ending was bitterly unsatisfying and provided almost zero catharsis, release, or resolution to the plot threads that I had been following for the previous twelve episodes. Not to drag in other shows, but I felt the same way (although less so) after the ending of the first series of Darker than Black. There is simply no real conclusion to the previous events - the show simply ends and I am left sat on my sofa swearing at the DVD player.

One thing that sweetens the show are it’s great visuals - the art on show ties things together with a cohesive, complete style that helps to fuel your suspension of disbelief even when people start busting out special abilities. The show barely skips a beat even in the middle of fast-paced action sequences and keeps you interested at all time. The seamless and self-confident presentation of a blighted, almost tired world really helps with the world building, which I previously gushed about a few paragraphs up.

The music in this season of Darker than Black sadly doesn’t quite live up to the amazing pedigree of the first series and its Yoko Kanno soundtrack - while the show does have some great one-off pieces and action music a lot of it feels awkwardly shoehorned in, enough so much that it ruins the mood in some cases. In particular the heavy use of creepy music really kicks you out of the lighter moments in the show into a mindset where you are just waiting for something to go wrong, lessening the impact when it inevitably happens.

When Suo’s plotline takes centre stage, this second series of Darker than Black comes into its own as a great tale in an exciting and interesting world. When it works, it works marvellously. It’s a massive shame then that so many conflicting elements also exist in the show, thwarting it with confusing additional story threads that, while interesting, don't get the time they need to be fleshed out in any satisfactory manner. It honestly feels like there is an intervening chapter that was lifted out of the intervening two years between seasons one and two that would explain a lot of the issues of cohesion and context.

After writing the above, I watched the third disc of this set, which contains a series of four OVA episodes originally released after Gemini of the Meteor had aired. No mention of these episodes was made on the press preview material I received from the publisher. I had originally intended to review these as an entirely separate item, however I feel I must append a note about these OVAs in this review in the interest of transparency. To prevent this already lengthy review from bloating further, suffice to say that these OVA episodes are set in-between seasons one and two of Darker than Black and detail the events that happen to Hei and Yin as they try and escape Japan after the events of the first series. These OVAs resolve almost all of the plot issues I had with Gemini of the Meteor, particularly as it relates to Hei’s plotline and the events at the very ending (although it does not resolve all of them, I hasten to add). These four episodes are themselves more of the same enjoyable action, world-building and animation as praised in the main review above.

If you are interested in watching this second season of Darker than Black, I would very strongly recommend watching these OVA episodes s first. They can be found on the third disc of this collection. I have kept my original review and score intact, but provided a revised score in brackets to reflect my opinion of the whole having now seen these OVAs.

5.1 English Audio, 2.0 Japanese audio with English subtitles. As well as the series itself and the four-part OVA side-story, extras on this collection consist of commentaries on episode four and part one of the OVA, textless songs and trailers.

8
While it still has some pacing issues towards the end of the series and never quite gels completely, This is a great, action-packed show worth picking up. Without watching the OVA episodes first, this drops to a 6/10 - A great show when firing on all cylinders, which makes it all the more depressing when it loses its way.
LATEST REVIEWS