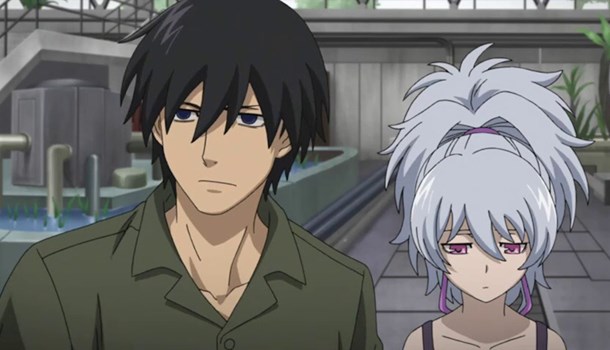 Hei, Yin, Mao and Huang continue their work for the Syndicate, trying to discover the mysteries of the gate in Japan and what also caused the disappearance of the gate in South America years ago. Hei needs to break into a Pandora Research facility to find and recover an artefact called the Meteor Fragment and uncover some of the secrets behind the contractors.

For those waiting to get some actual plot development, then here it is folks. Darker Than Black has been a slow burner in the arc-story plot, which to be fair hasn’t changed much here, but the twists are coming in faster and with more relevance this time round. We still get the pretty much standalone two episode mini-arcs, but they are becoming more interesting as we get to see the pasts of the major characters and also different sides to them, making for some compelling viewing.

We're seeing characters evolve, and also that there is more to the contractors and dolls beyond the killing and order taking. Hei seems to be showing a duel personality between a docile everyday man and his assassin persona. While one is obviously used for a cover, there are times where the series shows that there seems to be more to it than just a thinly worn disguise, when the supposedly emotionless assassin cares more about the people around him that he cares to admit to. Then there is Yin, who for the most part has been a side-lined character; here she explodes into a fully-fledged personality with an interesting backstory as part of a compelling story arc that really does tug on the heartstrings. You would be a very cold hearted person if you felt nothing during that.

At the end of the day, those that enjoyed the first volume of Darker Than Black will no doubt enjoy this latest batch of episodes. There is still one more set to go, but it promises to be something that most will enjoy. Those that weren’t convinced by the first set will find little here that will push them on towards the end, which is a shame as the characters and relationships take providence over the supernatural elements of the series and are used only as a means to carry the story on. Darker Than Black is easily one of the better series released in 2009, with this volume sealing the deal even more.