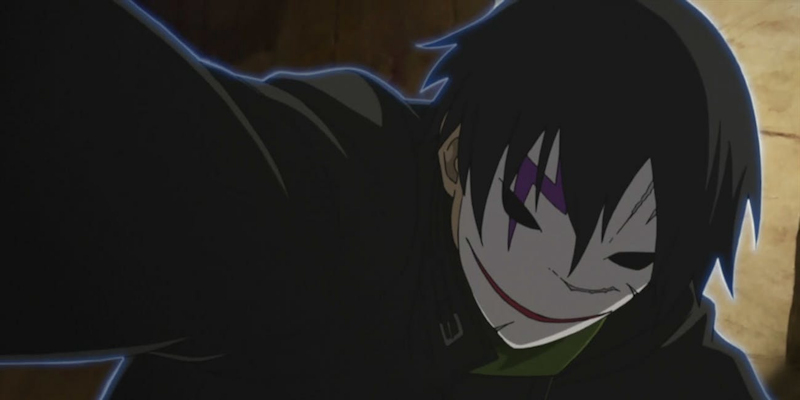 So, imagine you have the power to walk through walls, freeze people in their steps or switch bodies, but had to do something that you hated every time you did it. Like smoke, arrange stones or drink the blood of children; would you use your powers? Darker Than Black takes you to the darker side of superhuman powers, but is it just another X-Men in disguise?

Following the appearance of the Hell’s Gate in Tokyo, the rise of Contractors and Dolls and the appearance of fake stars in the heavens, countries and agencies from around the world are seeking the purpose of this area of dead space. Contractors are people who have gained superhuman powers, but as their name suggests, they are contracted to do some sort of task after using their powers. Be it breaking fingers, smoking or arranging stones in lines. No one contract is the same. We follow Hei, a contractor working with a team to fulfil his employers goals along with his team mates Yin, Huang and Mao, as well as discover the true meaning behind the Hell’s Gate.

The only real way to describe Darker Than Black’s plot is that it's like watching Lost. You get told bugger all about the underlying setting and story, but the characters are varied enough to keep you from losing interest and the two episode mini-arcs have enough moral dilemma versus action, excitement and personal insight to keep you wanting to come back. If it wasn’t for the story pacing and the characters, this series would be infuriating with its lack of information. Take the Hell’s Gate or the reasoning behind the prices for the contractor powers, or even better the sky filling with fake stars. How the hell does everyone just accept it, get on with their daily lives and go around stopping the evil contractors and the mysterious forces? It boggles the mind at times. But then that’s the key to Darker Than Black - if you dwell on the details then you miss the main meat of the show. Granted, like Lost should we get nothing for our troubles watching then there will be Hell to pay... although a 25 episode series is going to sting less than a six year TV series that was making it up as it was going along from halfway through.

Side-tracking away from the plot, the other aspects of Darker Than Black are at least not as infuriating as the background story. Animation, both in the 2D and 3D department are of BONES' usual high quality, with the action coming in thick and fast and contractor powers being used everywhere, ranging from body transfer to ice powers, teleportation and the good old fire starters. Music is also another high point with some catchy tunes during the course of an episode as well as quite a good opening song, which may be a bit moody for some.

Technically, we have the usual standard we seem to come to expect from both Manga and FUNimation. The set comes packed as a two disc set, so you're getting twice the amount of episodes for your money, with the DVD transfer and sound being the standard DVD quality you expect. The show is somewhat darker than normal (surely the title must have been a dead giveaway), but there isn’t too much compression artefacting to destroy the experience of watching at least. The English dub is the usual passable fair and will be down to personal preference as to which language you are going to watch it in.

At the moment I’m willing to cut the series a break - Apart from some obviously strange plot points, the series does have a lot of potential and hopefully will come to a conclusion that the viewer is going to be happy with. Should Darker Than Black manage to reel in its sky-high explanations for it’s basic plot points, but keep the high grade it has accomplished in other areas, then we could have a real winner on our hands.

The usual band of extras with opening and closing titles. There are also some DVD commentary, cast auditions, character bios and a gallery.

8
Early inconsistencies stop this from being a must-have for the time being.
COMMENT AND DISCUSS
blog comments powered by Disqus