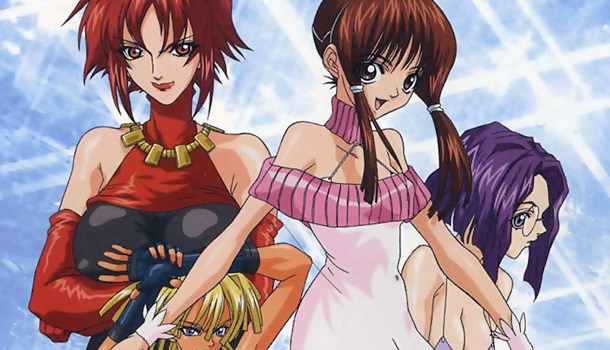 Daphne in the Brillliant Blue 5-6

MVM's cute, under-dressed sci-fi opus reaches it's sugary and titillating conlusion with all the predictibility and subtlety of an Elephant spotting a peanut in a conservatory. It ticks so many boxes it might just as well work in the civil service, and although the series has been watchable in the broadest sense, the last 2 discs don't pull anything remarkable out of the bag.

The girls take on a few more jobs chasing criminals and star of the show Maia begins to recover her memory - cue angst, arguments with her work-mates and startling revelations which fail to startle or indeed reveal very much beyond the wettest conspiracy ever, which is almost ironic considering the setting.

It's not just that DITBB fails to pull a much needed rabbit out of the hat, it's that the build up has been hanging in the air for about 10 episodes, and none of it really makes any waves - why did Maia fail her exams? Is the mysterious stranger following Maia really her brother? And why is the government spending vast sums of money monitoring a useless girl? Come to think of it, why are we?

The end, when it does come, is actually quite harsh, to the point where it jars with the series' general sentiments. Maia's past might be tragic, but the outcome of her regained memory has no real consequences for her, and serves as nothing more than an embarassment to the encumbant government. Hardly earth-shattering stuff, no matter how many stuffed toys float in the ocean as gravestones for the long departed.

Suffice to say that those who have followed the series thus far will find much more of the same here, and it may be that I'm being a little harsh on the closing chapters. It does what it sets out to do, it leaves your brain alone and keeps you occupied with ridiculous "battle" costumes that defy gravity and look incredibly uncomfortable. It's not so bland that it won't entertain, but if it was on the TV you'd probably ignore it. I'm still amazed it's sold as well as it has, but if the target market of teenage boys has found something to keep them entertained and off the streets, more power to it.

On a technical note, the dub is shrill and passable, but go for the original dialogue if you're going to pay it your undivided attention. Animation is the usual TV quality, and the review discs operated without any glitches.

5
Daphne ends with a bit of a whimper, but it does end, and for that I commend it.