Daphne in the Brillliant Blue 4 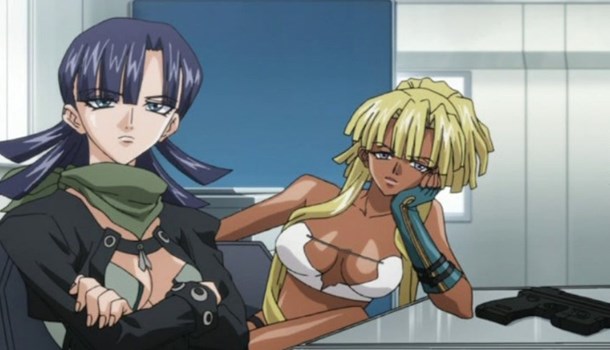 Daphne in the Brillliant Blue 4

Another dose of scantily clad mercenary insanity, and this volume is arguably the best to date. While early volumes relied on character introduction to keep things moving, this latest outing has the girls settled into their roles, with some nice banter and some amusing situations.

The series does fall back on one new character introduction, and this time the moronic gang of criminal brothers (Wong Chang & Lee), all of whom are incarcerated by this stage, are busted out by possibly the best character of the show, their sibling May. Arguably the only competent villain to date, it also lays the groundwork for yet more jokes about their mother (who has had at least 14 husbands!) Unlike her brothers, May is a treasure hunter rather than a thief per-se, and brings a sexy edge of danger to the show.

The writing seems to have taken a sharper turn as well - the disc covers terrorist attacks, jilted love and even something resembling an ongoing arc. What has become blindingly obvious is that the jokes are better when they don't revolve around Maia. She may be the main character, but she's arguably the weakest element to the show. There's only so much bumbling cuteness I can put up with, but at least the other characters are aware of how useless she is. Rena is especially fun to watch, a calm head in a sea of over-the-top chaos, her casual but razor-sharp one-liners make the show a much more entertaining beast, and without her to reign in the others, it'd be hell to watch.

According to Tony Allen at MVM in our recent interview, Daphne has been an unexpected success, and given the abundance of cute girls in tiny pants it would be easy to make the obvious conclusion and assume the selling point is sex, but there's a solid show behind the sexy facade, and God help me, it might just be starting to show through.

The animation is crisp and fluid, with some lovely stills available if you like screencaps. The outfits are still ridiculous, but at least the story lines are now strong enough to keep your focus on the show and not the wardrobe.

Not even trailers, if you can believe that!

7
The characters grate less, the outfits are still bizarre, but y'know what? It's a good romp.