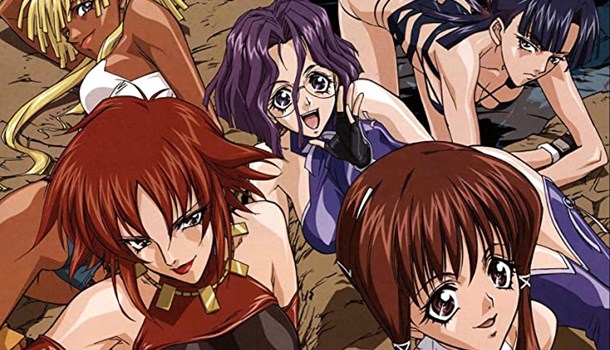 Its time for a futuristic adventure on the ocean - no, it’s not some terrifying new incarnation of One Piece, but Daphne in the Brilliant Blue which is being re-released by MVM this month. So get a firm grip on your string panties and let’s blast off with the Nereid girls!

In the future, global warming has resulted in the ocean covering all land on Earth, leaving mankind left on just a few floating cities. Despite this, life carries on more or less as normal and in any case we aren’t here for a deep story of a post-apocalyptic world or the like anyway. Our leading lady is Maia - a young girl working to get into the Ocean Agency, an organisation whose function is never really defined though at various times they seem to be able to do everything from conservation work to functioning as the secret service. Unfortunately for Maia things don’t go to plan and she fails to pass the entrance exams. To make matters worse she also ends up homeless with no job and very little cash. Through a series of misfortunes Maia finds herself working with the local branch of Nereids, a sort of odd-job company specialising in high-risk assignments. Working with her (in order of descending amount of clothing) are Shizuka, the food-loving tech-head, femme fatale Rena, gun-nut Gloria and the Terminator-like martial artist Yu. Despite being in turns horrified and bemused by her new colleagues, Maia must set out hot on the heels of kidnappers, saboteurs and penguin smugglers (no, really!) all the while struggling to uncover the truth behind her mysterious past (TM).

The vast majority of this series is actually really good, relying on fairly slapstick based humour for the most part (when all else fails someone [Yu] punching someone else [Gloria] through a wall is always funny). The refreshing lack of a deep plot arc for most of the series allows the writers to go with the flow and concentrate on setting up the gags to maximum effect and inventing ever more bizarre situations for the team to find themselves drawn into. It certainly makes a change with every other series trying to traverse darker routes in recent years.

Similarly refreshing is the show's approach to fan service. Whilst at first glance the series might look like it’s going to constantly rely on a stream of panty shots and jiggling bosoms, and whilst its heroines run around in their (very revealing) underwear (they could conceivably be swimsuits given the setting but they can clearly be seen wearing them under their regular clothes and there’s little difference in this case really), the series never really goes anywhere with it. It’s all treated totally as just a matter of fact with no real lingering close-ups or male characters getting nose-bleeds and none of the nudity that is so common these days. Despite their outward appearance, this makes it almost innocent in practice – a scene in the second episode highlights this fairly well as Maia becomes embarrassed at being see wearing a long T-shirt over her underwear but then doesn’t even blink at being seen strutting around in far less moments later.

Sadly it can’t all be comedy and semi-progressive ways of dealing with fan service. Somewhere along the line the writers decided that what this series needs is a deeper plot and that the best possible one for Daphne would be giving Maia a big cliché... sorry, I mean secret. Sadly this plot does nothing but slam the brakes on every time it rears its head, stripping the comedic elements from the series and turning the series into a tedious chore to watch as they unfailingly hit every single cliché associated with this kind of plot in the most unimaginative manner possible. Most of the final two discs are taken up with this and it becomes highly frustrating as you remember that this show used to be really fun. Worse, it serves to highlight the fact that there’s absolutely zero character development throughout the series. In the episodic comedy episodes this is fine but an arc-based story relies on character development and you’re constantly aware of its abscence.

On a technical level it’s tricky to work out exactly how to judge Daphne. The series is almost ten years old at this point and the production values are pretty average for the time. Unfortunately they haven’t aged particularly well for the most part and its rife with visual inconsistencies throughout (Shizukas bosom is the most obvious example – watch in amazement as it changes size and shape with every change of camera angle). Ultimately it again comes down to the kind of story being told - the visuals are fine for the slapstick action of the majority of the series, but when the pace slows during the more heavily dialogued arc stories its far more of an issue.

So in what is very much a show of two halves, can the good even out the bad? Well... just about. The good episodes are undeniably good, harking back to early 90s anime and proving to be really good fun to watch, and there are just about enough of them that you can enjoy yourself enough to make it past the dull ones. As a whole, you’ll just about get your money’s worth from the discs.

6
Almost a hidden gem that gets bogged down in its attempt at some deeper story-telling.